We decided to do the June wine dinner on the first night of Italianfest here in Newport, Kentucky, so of course we had…Thai beef salad! Okay, so there’s really no connection there. However, you may recall this meal from last year because Christine liked it so much that she requested a repeat.

The spring rolls were easy to make and I whipped up a spicy peanut dipping sauce to go with them. For filling I used lettuce and a little mint and parsley from our garden along with some shredded carrots, peanuts and shrimp. The shrimp were frozen and only took about three minutes to cook in boiling water. The most challenging part was rolling them up in the spring roll wrappers, but after the first couple I got the hang of it. 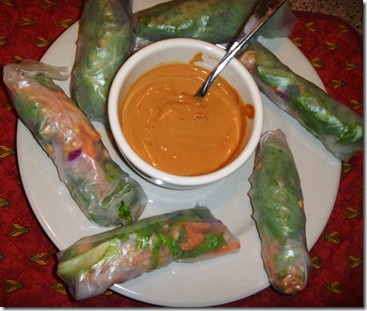 After I had the appetizer ready I made the mango puree for the dessert and put it in the freezer. It is supposed to be refrigerated for 3 to 4 hours before serving, but I got a late start so I put in the freezer to cool more quickly.

I cleaned up the kitchen a bit, as cleaning is really my specialty, and then prepared the sauce and all of the cold ingredients for the beef salad. You may be asking yourself, “Where is Christine all this time?” Christine had gone to see a movie with our friend Susanna, who was joining for dinner later. In addition to being the first night of Italianfest, it was also the night we had one of the worst and longest lasting rain and thunderstorms of the year. Christine and Susanna had walked to the theater and since it was too rainy to walk home, holed up in a bar to have a martini…and then another. Oh, the humanity!!! Finally they called me and I went to pick them up in the car and return them to the house for dinner.

Once we got home we had the appetizers and then I cooked the meat under the broiler in the oven (Rain, remember?) I mixed the cooked meat with the cold ingredients and the sauce and we had the main course. Everyone loved the salad and the mélange of flavors. [Ed. note – nice word choice there, Jeffrey...you’re getting the hang of this food blogging thing!] 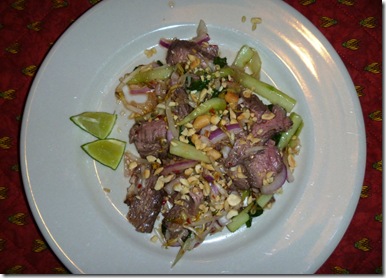 After the main course, I prepared the dessert, adding some watermelon balls to the pureed mango in stemmed glasses for a cool and refreshing treat.

As for the wine, we all liked it and thought it complemented the meal nicely. The label said that the wine was best served slightly chilled so I had put it in the refrigerator for a while. However, we all thought it was actually better when it warmed up and also when it had been sitting out for a while with a chance to breathe.

For a finale we had a little tasting. I opened up a bottle of my special homemade ice apple dessert wine along with some similar wine sent to us by our friends Sue and Mark, owners of Maple Leaf Orchard in Wisconsin (http://www.mapleleaforchard.com/). Both made for a sweet digestif to end the meal. 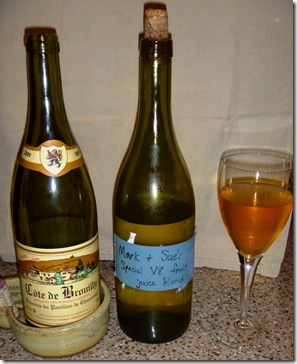