As the heat of summer continues to build, more and more of you are reaching for tasty bottles of cold rosé. Lots more of you, in fact. Whether from Provence or Petaluma, American consumption of rosé has exploded in the last decade.

When I wrote the first words in this space in 2006, the U.S. imported somewhere in the neighborhood of 200,000 liters of rosé from Provence. In 2016, upwards of 8 million liters found their way to American palates. Big Wine Store near me recently rearranged its shelves – devoting practically an entire aisle to the pink stuff from around the world, where I used to hunt for my goodies from Tavel and Provence tucked away in a dusty corner near the White Zin.

As I started my quest to get my readers to embrace my oenological mentor’s mantra that “Pink is not a flavor” and that dudes could drink pink wine and still feel manly, dry rosé was one of the best kept secrets of the wine world. But as the world’s caught on to just how daggone good the stuff is, winemakers and distributors picked up on the public’s new thirst and began raising prices to match demand. Where a $15 bottle of rosé was almost unheard of just a few years ago, many quality entries are now in the same range as premium reds and whites – in the $25-30 range. Heck, I sampled a rosé a few months ago tagged at $70.

People, that’s just crazypants. Rosé is a wine for happiness. It’s a great choice for meals, sure – but it’s darned near impossible to drink rosé and be depressed. There’s something about that fruit and acid balance that just calls for friends and a social setting. And while, yes, there are certainly levels of quality that can roughly correlate with price – come on, that’s simply excessive. Give me $70 and the Spanish section and I’ll get you three bottles that will knock your socks off. A $70 bottle of rosé is just showing off.

The other end of the spectrum, thankfully, hasn’t been pushed out of the market entirely. I like my rosé cold and plentiful and if you’re reading this, I know you do, too. After a recent trip to the store where I saw that a couple of producers are now boxing rosé, I decided to pit three large-format rosés against each other in a happy-go-lucky wineglass rodeo. The contenders:
[Side note – a few of you may remember that I swore off Black Box wines after a series of messes in my fridge from spout issues. I let one back in the house…you know…for science.]

The La Vielle Ferme is from the Southern Rhone valley, just northwest of the Provence region. It’s a blend of Cinsault, Grenache, and Syrah. The Bota Box and Black Box wines are considered “California blends” – meaning there’s not 75% of one varietal in either. The Black Box wine says that it’s “built around Syrah,” and I couldn’t find info on the makeup of the Bota. I suspect it’s also Syrah-driven.

Pouring the wines side-by-side-by-side, the LVF was by far the lightest in color – the pale pink traditionally associated with much French rosé from Provence and surrounding environs. The Bota Box was a slightly darker pink, although still clearly on the lighter side of the ledger. The Black Box was a darker salmon color, almost orange. This shouldn’t be considered a defect – rose gets its color through brief contact with grape skins. The longer the contact, the darker the wine, so one would expect a richer flavor with a darker colored rosé.

On to the flavors – rosé typically has a fairly delicate nose, as was the general case here. The Bota Box’s nose was light with peaches and strawberries as the dominant characteristic. I found it to be medium weight for a rosé, with more strawberries and a mildly acidic palate. The finish was crisp and fairly clean. I see this as an inexpensive American riff on a French rosé.

The LVF was along the same lines as the Bota, but classed up a bit. While peaches and strawberries were in the game here, the nose was much more “blossomy” on those particular flavors. The wine was lighter and more crisp, with lemons, peaches, and strawberries all taking their turn on the palate. While it’s certainly not a complex wine by any stretch, it tastes like what you would expect from a dry French rosé.

The Black Box was produced in a different style altogether. Oranges and grapefruit were the first flavors I got from the bouquet, which was followed by melon and cantaloupe on the palate in a somewhat heavier style. The finish was fruitier, lower in acid, and had a minerally/metallic taste that wasn’t nearly as pleasant to drink as the other two. Served cold, this would be good if you really weren’t thinking about it much. A cheap rosé for day drinking perhaps.

So, as one might expect, the wine that came in the big bottle topped the two boxes, but not by much. I’d not hesitate to pour either the Bota Box or the La Vielle Ferme on a hot summer’s day for some kickback time or with a meal where you really aren’t looking for a perfect wine pairing. Drink your rosé without thought and with happiness, the way it was intended.

What’s your typical level of clumsy?

If you have ballerina-level grace or Messi-quality balance, this product likely isn’t your bag. But if you talk with your hands, enjoy cocktails on a porch or a boat, or just bump into things more often than you might like (any of which could easily apply to yours truly), then you might find the Mighty Mug an intriguing addition to your barware collection.

“Mighty Mug” drinkware – which includes wine glasses, beer pint and pilsner glasses, Old Fashioned glasses, and travel mugs – are all equipped with a special base which the company calls Smartgrip. This rubber footing is designed to create a strong vacuum if the mug is nudged from the side, preventing the glass from toppling over. Lifted straight up, however, it behaves as a normal glass. To wit:

I had the opportunity to test the wine stems and beer pints from Mighty Mug’s collection. 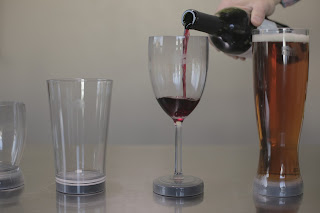 All in all, I can see the utility – especially if you’re either out and about or working at a desk where a spill might fry your phone or other electronics. Take that into account before deciding if Mighty Mug is right for you. You can order them from the Mighty Mug website or at any number of other retailers.