Moving to the other side of the wine aisle…

When I started drinking wine, I thought (as many do) that red wine came from red grapes and white wine from white grapes. Let's have a look see. Here's a picture of some ripe cabernet sauvignon grapes:

And here are some ripe sauvignon blanc grapes: 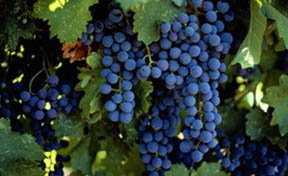 The color of wine has little to do with the color of the grape. If a winemaker wishes to make a red wine, the skins of the pressed grapes stay in the fermenter with the juice. The alcohol produced acts as a solvent, drawing color from the grapes. This process is called maceration. Grape skins are not present in the fermentation of whites. (Rosés are made by leaving the skins in briefly, yielding a "less red" color.) Since tannin also comes from the skins, white wines tend to be less dry and have more fruit flavor than reds. Tannins also act as a preservative, which is why -- as a rule -- it's better to drink whites and less tannic reds young, while cabernets can age for long periods of time.

As I mentioned before, there are three major white varietals: Sauvignon Blanc, Chardonnay, and Riesling. And, as before, pick up a bottle of each of these varietals, pour a little, and taste them in this order.

First, Sauvignon Blanc. Sauvignon blanc likely originated in the region of . Most white are made largely from this grape. Sauvignon blancs tend to be tart and crisp. The tartness of a sauvignon blanc comes from the wine's higher level of acidity -- much as an orange is more tart than an apple. As you sniff this wine, you'll usually smell something a little tropical -- pineapples and grapefruits, usually. There's also often a smell that many people describe as "herbaceous" -- like freshly cut grass.

You'll immediately taste the acidity on the first sip. Many SB's have a very pronounced citrus flavor. Some also have a mineral character -- and we'll get to that when we explore sauvignon blanc in more detail. The finish is usually tart and crisp. On a hot day either after working outside or sunning poolside, there are few more refreshing choices than sauvignon blanc.

Sauvignon blancs are incredibly food-friendly because of their high acidity. Much as a cabernet sauvignon's tannin allows it to cut through the fat of a piece of red meat, the makeup of a sauvignon blanc allows its flavor to stand up to many other foods. Spicy foods like Mexican, Indian, or Thai go well, as would a simple salad. (Salad, honestly, is one of the more difficult food pairings.) Light fish dishes also go well, as the sauvignon's flavors won't overwhelm those tastes.

On to Chardonnay, the most popular white varietal in the world. Why? In my opinion, there's more variation in taste among chardonnays than almost any other varietal, red or white. Thus, there's a "flavor" of Chardonnay for almost any palate. In general, Chardonnay generates a full-bodied white wine, less tart than the sauvignon blanc. The fruit is less pronounced, and the finish tends to be smoother.

As for that variation in flavors, if you ever hear discussions of "old world" versus "new world" wines, Chardonnay is a classic example. Old World-style chardonnays (such as white Burgundies) tend to be slightly acidic and crisp. The fruit flavor tends to be mellow, pleasant, and refreshing. New World Chardonnays (specifically, chards) have two distinct additional flavors: butter and oak.

The "oak" flavor is unmistakable. Many chardonnays are aged in charred oak barrels (or toasted oak chips are added), which makes the wine slightly darker and imparts a character of oak or vanilla. For many years, the wine industry went overboard in "oaking" wines, leading to a signature flavor on one hand, but a tough wine for many palates to handle on the other. Some wineries are swinging the other way, specifically making "unoaked" Chardonnay.

The Rabbit Ridge I used is very much a "" chardonnay. Both the oak and butter flavors are present.

Because Chardonnay has so much variety, you can find a specific one to go with any number of foods. The Old World chards go really well with seafood, while the ones pair with chicken, cream sauces, and pork.

Finally, Riesling. Many people's thoughts of Riesling don't go far beyond the mouth-puckering sweetness of or Blue Nun -- causing lots of folks to pass on this wonderful varietal. Riesling is generally the most full-bodied white wine and there is usually some sweetness. Riesling is also one of the few whites, along with Sauternes, that can be aged.

I did an extensive entry a while ago on Riesling, so if you want to know your spatlese from your kabinett and your trocken from your halbtrocken, go here.

The Selbach is a "Qualitätswein" -- the German designation for basic table wine. You'll notice a fairly strong apple scent when you swirl. The taste will be "round" and full with a pleasant sweetness. The sweetness will be even more evident next to the other two wines. You'll also get a little bit of acidity on both the taste and finish.

Like sauvignon blanc, Riesling is an exceptional food wine. Thai or Chinese food go remarkably well with Riesling, but traditional German and Austrian cuisines work well here, too. If you're ever at a loss for a bottle of wine to take to dinner, buy a Riesling, specifically a "dry Riesling" (the label will either say "Dry Riesling" or "trocken"). Dry Riesling pairs with anything from sushi to bratwurst.

One final note: Although there's no absolute consensus on the order in which you taste wines -- I tend to taste drier wines before sweet wines, and light wines before heavy ones. A sauvignon blanc will taste better before a chardonnay, rather than the other way around.

I'd suggest you do a couple of these "varietal side by sides" so you can tell the difference among grapes. The next several "lessons" will deal with the varietals individually. First up will be pinot noir.

For a while I thought sauvignon blanc was my favorite white, but then I decided the acidity was too overwhelming for me. Perhaps I'll try to get beyond that and find these flavors you're describing (I'm at a very novice stage of wine appreciation where I have to be told what to look for).

Love this series - keep it up!