Thinking Inside the Box

A few months ago, longtime Vine reader and neighbor Christine the Pie Queen asked, "So, when are you going to do a column on box wines." I mentioned to her that planned to do one for April Fool's.

"No, seriously," she said with an edge in her voice that gave me goosebumps. This is, after all, a woman who hiked the state of in five weeks, and offhandedly asks questions like, "Hey, are you guys interested in a triathlon?"
She was correct, of course. My experience with box wines had been unpleasant for the most part, but it made sense for me to give a take. After all, it is the least expensive wine delivery system.

So, how do they get the wine in there? The wine's not really in the box, of course. There's an aluminum or plastic pouch inside the box, tapped with a small spout of some kind. These containers are officially called "casks," although they're known in as "goons."
Box wine tends to be of lesser quality than bottled wine -- but there are advantages. Once you open a bottle of wine, you're committed. The wine starts to oxidize almost immediately, and your wine will lose quality rapidly. Box wine never touches air until it hits the glass, so it can keep consistent quality until needed (although you can't age box wine). One of our friends termed box wine "Homer Simpson wine -- you push a button, and there it is!"
They hold up to five liters of wine, but the most common size we'll see is three liters. Three liters is equivalent to four regular-sized bottles. And there's the rub. I drink a lot of wine, obviously, but having three liters of a generally-not-great wine lying around for just myself and the Sweet Partner in Crime isn't what I'm looking for. Generally, you'd get these containers for larger gatherings -- or if someone is distracted, gone for work, or just lame enough to need a wine that will last for a month.
Still, the obvious reason was to par-tay. Thus, the First Annual Labor Day Box Wine Extravaganza was born. Christine and I each got two boxes of wine, and we went from there. The cast of characters:
We did our best to take notes on our tastings, but by the end of the evening, predictably, we lost track of who said what. The quotes tell the stories well enough.
The wines:
(Christine and I bought our wines separately, so we ran with what we had.)
First up, the Angel Juice.
We did find that it went reasonably well with food. Pesto paired well for some reason.
Then came the Banrock Station. Honestly, we all wished we'd just stayed on the train…
Truly an awful wine -- unanimously one of the worst we'd had collectively. More optimistically, the suggestion was made: "Maybe you could make a spritzer out of it." (You couldn't.) Christine made the best suggestion: "Well, at least you could recycle the box…"
With palates collectively in shock, we were worried as we edged towards the reds. The Black Box wines -- we were dubious -- but we went forward. We were too invested to turn back:


Black Box's followed suit:
We made a dent in all four. The Cabernet had the least left by morning. The chardonnay was the cheapest ($16), while the was the most expensive ($24). Since there are clear levels of quality, if you're willing to drop $20 or more on a box, you'll probably end up OK.
One last note on the Banrock: We did follow Christine's recommendation: 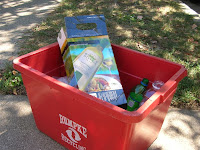 UPDATE: While this has little to do with box wine, the Sweet Partner and I enjoyed some "regular" wine last night at Red, a restaurant in Cincinnati's Hyde Park district. Two thumbs up from us. The food was excellent (we had a filet and halibut, along with some of the best bourbon bread pudding outside of Lexington), the service was on par with the food, and the atmosphere was classy without being stuffy. Their website is fun, too -- allowing you to see the presentation of all their entrees. Give it a go for a special occasion.

Christine's box-wine enthusiasm has crossed a few state lines and we tried one recently - Corbet Canyon Merlot (only $11 for 3 liter box). It takes some time for each glass to breathe, but about mid-way through dinner, the wine is really a nice merlot. It may not be the complex flavors of a typical $20 bottle, but it's perfect for that glass of red you need on a week night to accompany your spagetti. :)
Boxed wine also solves the cork shortage. I just hate those plastic corks - I find the boxes easier to accept.
cheers,
melwina

I am pretty sure that I am not hopping out to buy wine that is described at best as 'inoffensive'. Thanks for taking the hits for the rest of us and reconfirming that boxed wine is just, well, boxed wine.