Men like wine. Why don't we see it advertised to them?
Watch typical "male" programming. You know, talking sports, wrestling, action movies, "24," and so on. You don't see wine ads among the deluge of "light" beers, gadgets, and John Mellencamp singing about Awrrr Countreee. Heck, they'll advertise a flippin' minivan, but not a decent bottle of cabernet.
Men are a stable wine buying population. We drink the stuff. We write songs about it (from the Rolling Stones to Merle Haggard to Axl Rose). The majority of winemakers are men. The manliest writers -- think Hemingway, , Kerouac, et al -- feature it prominently. Behind the pursuit of "yabyum" and enlightenment, a close third-ranking activity in "The Dharma Bums" was finding a jug of wine and hanging out. Basically, the same things we still do…
Perhaps winemakers think that men aren't a good target demographic. Perhaps they think that other avenues are more effective -- I'm not sure. Even with females making up the larger percentage of wine drinkers (52.5 to 47.5%), that still leaves about a billion bottles consumed by men each year in the U.S. alone, and they haven't even surveyed me yet. In my opinion, the first winemaker to catch on to the fact that there are more than Neanderthals watching "everyday man" shows will make a mint. Maybe a couple of winemakers are wising up. I heard an ad for Dancing Bull Wines on "Mike and Mike in the Morning" on ESPN Radio, so who knows?
Regardless, as a rule, men are usually more clueless than women in a wine store. Why? Genetics. We're preprogrammed to a) be the authority and b) never ask for directions. (That thud you just heard was the Sweet Partner in Crime braining me with an Introduction to Sociology textbook.)
Let a typical man loose in a wine store and what happens? A little aimless wandering, perhaps the "what have I heard of before" thought process -- and, eventually, the same thing happens to a man as a woman. He looks at labels and buys something that looks interesting. Shiny objects and pretty colors, you know. Breweries figured that out a long time ago.
Slowly, wineries are coming around to this way of thinking. I put myself in a mindset of looking at labels and walked the aisles, thinking, "What looks interesting?" Here are a couple that jumped out: 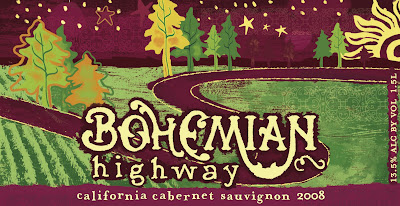 Bohemian Highway 2004 Cabernet Sauvignon -- For the ex-and-present hippies among us. This is a pretty straightforward cab. A cab you could pour and enjoy with a meal, or sit around and Kerouac right out of the bottle. The fairly strong nose is currants and blackberries. The body is big and fruity. Nothing you have to work too hard to wrap your palate around. The finish is straight fruit, almost Zin-ish. Not a lot of tannin to be found, so it would be an excellent party wine. The flavor blends well with anything smoky. $7.
Joe Blow 2005 White Wine -- Even more challenging than finding the right marketing for men would be finding a way to market white wine to men. At least red wine has the romance and the better descriptive words on the cards in the aisles. You don't hear a pinot grigio described as "muscular" very often. So, create a label that says, "Hey…no big deal…it's just wine." Ironically, the Joe Blow is made from three very "female" varietals: chardonnay, viognier, and chenin blanc. The nose is very interesting. I guess you'd call it "tropical," but I got an odd combination -- butter and papaya -- and it worked. The viognier makes the nose strong, the chardonnay gives it a full body, and the chenin blanc adds a nice crispness. A good hot weather wine or with anything spicy. $10.
Jarhead Red Table Wine -- The Marine emblem stands out on this simply labeled wine, marketed as a wine "made by Marines for Marines." I'm not a veteran, but I certainly appreciate the service of the Marines and the fruit of the labors of a couple of them. Made in conjunction with Firestone Vineyards (most of the wines are out of Vine range, but if you get a chance to try their cabernet, splurge.) The Jarhead is a solid red, definitely a cabernet dominated blend. Plenty of fruit on both the nose and palate. The finish is dry, but not very long. More of a get in, get out wine with any kind of red meat. We had this outside one night in the company of one of our neighbors. The proceeds from the sale of this wine go to the Marine Corps Scholarship Fund (mcsf.org). This organization provides educational assistance to the children of fallen Marines. $13.

What? No Cleavage Creek? Had a bottle once. No idea what it tasted like, no idea how much it cost, but the label was unforgettable.

I spend much of my youth as a loud mouthed rainbow grease mop headed beer drinking deliquent. I know quite a bit about beer, from those years, but I knew nothing about wine, thus, in knee jerk pose, I wrote off all wine as being the beverage of pussy rich folk.

However, with the patience of my better half, and my association with the genius here, I've come to realize that it doesn't have to be all or nothing. Depends on the chow.

I had to tell the Poobah how to post a reply to you.