The slide from Thanksgiving to New Year's is not just party season. It's also "DOORBUSTER DEALS SEASON!!!" How much footage have we seen of people lined up outside Best Buy at 4 am to snag a $50 Wii, outside a Hummer dealership for a free year of gasoline with the purchase of an H3, or outside K-Mart for a three-for-one pack of apple corers.

Aside from simply getting people into stores to flail about in a sea of crass Christmas commercialism, why do merchants go to all this trouble?

Inventory, of course. At year's end, old merchandise gets cleared out to make room for next year's styles, versions, colors, editions, etcetera. What's the best way to clear some space? Why, a sale, of course! Offer sharp discounts to get overwilling consumers to cart away your excess.

Wine stores are like the aforementioned car dealerships. This year's models are still on the lot when automakers prepare to ship next year's, so dealerships offer "end-of-model-year" closeouts. As wineries crank out vintages, the previous year's wines need to get moved off the shelves. The end of the year is a great time to pick up great values. Some things to keep in mind:
This is also a great time to try some wines that would typically be a little more expensive than what you would normally get -- you'll be able to see if they're worth a splurge later on. Here are a few end-of-year sale wines that dropped themselves neatly into Vine range:

Ravenswood 2004 Old Vine Zinfandel -- Picked this up for $11, down from $17. I normally don't think of Zinfandels as "elegant," but this was as close as I've found. Rather than the usual 2x4 of fruit across the tongue, the Ravenswood is surprisingly restrained. There's a nice, not overwhelming, fragrance of plums and berries on the nose. The palate has some nice fruit also, but it's not as jammy as many Zins. Instead, there's a nice balance of fruit and tannin -- almost like a cabernet. The finish is also less fruity and more complex than I've run into with Ravenswood and many similar wines. Very pleasant.

Wente 2005 "Morning Fog" Chardonnay -- Wente Cellars made the first wine in labeled as Chardonnay, and they're a very solid mid-line producer. This wine is normally around $18 a bottle. I got this one for $13. This full-bodied chardonnay starts you with a well-balanced nose of toasted oak and vanilla. The flavor is rich, a little citrusy, and oaky. The finish is long and a bit crisp for a chardonnay. Unlike many chardonnays (which generally aren't my favorites) -- this one balances fruit, oak, and richness nicely. I enjoyed it. 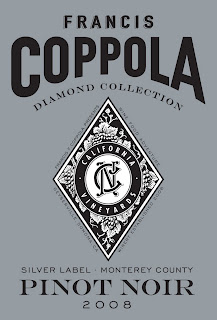 Coppola wines. I haven't done it because I've not liked them, but there's something about someone famous doing a "second career" as a winemaker that gave me pause. (I haven't tried any of the Greg Norman wines for a similar reason.) I figured that these might be overpriced, leaning on the Coppola name, but this one was $14, down from $20 -- so I figured, "Why not?" and I was pleasantly surprised. This is a very fragrant wine -- scents of strawberries, cherries, and something like leather. The body is very full for a pinot. A friend of mine once talked about how much he liked "chewy" pinots, and this one certainly fits the bill. Lots of berries and currant flavors, finishing with a thick, slightly dry flavor. A really nice pinot.


So, there you have it -- now is the time to try some of those wines you've thought about but thought they were just a tad too expensive. Get out there and Save! Save! Save!

(Hat tip to co-worker Kristan, her friend Emily, and the Sweet Partner in Crime for the column inspiration.)