The Sweet Partner in Crime hits a birthday milestone this year. She's long said she wanted to be "floating in the " then. Unfortunately, the collapse of the US dollar has made this an untenable scenario. If weren't an option, we decided the least we could do was bring to us.

In keeping with our New Year's Eve tradition of doing some experimental cooking, tasting scads of wine, discovering new pairings, and enjoying a mellow evening at home with Mooch, we forged ahead with a little Spanish feast for ourselves. The lineup for the evening: 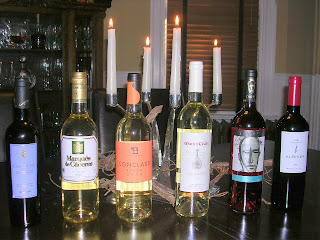 Primer Curso -- The Sherry Retasting
As you've undoubtedly noticed, the Amontillado is outside our price range. My good friend The Wizard of Covington and I have had a number of conversations about how many people's distaste for certain kinds of liquors came from not drinking "The Good." (The Wizard is now a fan of certain types of rum, scotch, and sake as a result…) Last year's New Year's tasting centered on Sherries. After that fiasco, I decided I'd get a recommendation on a better quality sherry before I wrote the beverage off. The Sweet Partner in Crime was dubious.

I poured a bit as an aperitif. The nose initially was pungent, but not unpleasant and somewhat nutty. I was hopeful. I sipped a bit. It was certainly better than some of the selections from last year, but "better" is a relative term. I could have drunk more of it, but it wouldn't have been my choice on its own. Perhaps with the food… 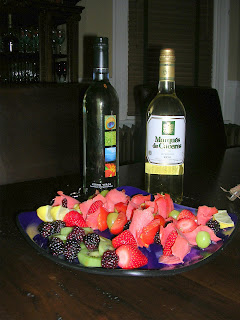 Our first course was the pintxos, which are skewers of tomatoes, berries, olives, and smoked fish splashed with lemon juice and sprinkled with fresh ground pepper. Our original thought was that the combination seemed peculiar, to say the least. On first taste, however, we discovered that the sweet, salty, smoky flavors meshed into something nigh unto spectacular.

We had this with the white Rioja and the Vinho Verde. (The latter is actually a Portuguese wine, since there's not a Spanish VV to be found in the Greater Cincinnati area.) The Vinho Verde (just like the last time I tasted it) was very light and crisp. The Rioja was fuller, fruitier, and slightly more "round." Both of them would make nice aperitifs both complimented the wonderful array of flavors on the skewers. The Rioja probably graded out slightly better for both of us, but neither disappointed.

Tercer Curso -- In the Raw 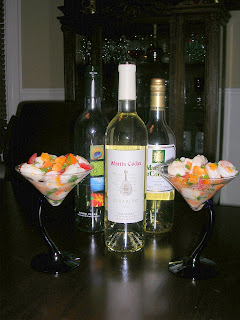 Next up was the ceviche. If you're not familiar, ceviche is seafood that's "cooked" by first blanching it in boiling water for a few seconds, then marinating it in lime and orange juice for several hours. The fish is then tossed with peppers, spices, and diced tomatoes. Both of us are big fans of this dish, and we were glad to see that we were able to properly replicate the scrumptious flavors.

We tried the ceviche with the first two wines, as well as the Albariño. On first taste, the Albariño was full of smooth pear and peach flavors, but still crisp and light. The finish wasn't as sharp as the other two wines. With the ceviche, though, there was no comparison. The Albariño blew the other two wines away. Arguably my favorite pairing of the evening. I can imagine that Albariño would be a good wine to have around for almost any occasion, as it's tasty on its own and superbly food friendly. 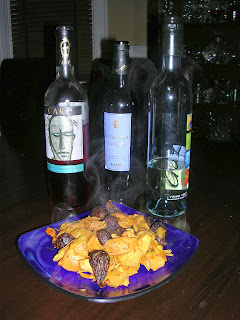 We love artichokes but don't usually use them as the centerpiece of a course. As an ingredient in a dish, artichokes usually add a really nice flavor -- but on their own, the unique flavor is notoriously difficult to pair with wine. We were not going to be dissuaded, however, as artichokes are favorites both among residents of the and our homestead.

The artichoke preparation was interesting -- pouring boiling water over the figs, letting them plump up for a few minutes, and then steeping saffron in the drained fig water. We then sautéed the artichokes briefly, added the saffron water, the figs, sliced almonds, some salt, and vinegar, and then cooked the whole mess until all the liquid was absorbed. The result was an extremely tasty concoction.

On the side, we had what turned out to be a very tasty rosé. This wine had more body than a lot of rosés. It was almost more of a "light red" than a pink wine. It was fruity and a little acidic, but had a "roundness" that I think came from the cabernet in the blend. Very flavorful. Alas, the two great tastes didn't taste great together. No matter what we tried it with, the artichokes made everything turn bitter. The rosé and the Vinho Verde were the best bets. The Albariño and the white Rioja would not be recommended. And the Sherry? Ew. Just ew. 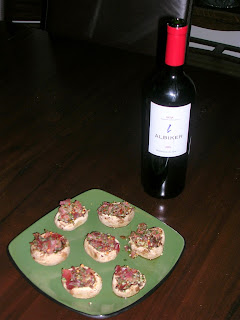 The last official course of the evening was mushroom caps stuffed with diced Serrano ham, parsley, and peppers and then baked. The base flavors were great, but, unfortunately, we added a bit too much dried pepper. The heat of the filling came close to overwhelming the really interesting combination of flavors, but we managed.

The Rioja was quite a contrast to the lighter styled wines we'd had earlier in the evening. After the whites and the rosé, a mouthful of tannin and berries came as a shock -- albeit a very pleasant shock. The nose had plenty of plummy fruit, the body was full, and the finish was medium in both length and dryness. Very pleasant.

If we'd cut back on the heat a bit, the Rioja probably would have been the better pairing, but the rosé turned out to be quite nice. The acidity cut through the heat and brought up the flavor more strongly, but it wasn't for the faint of heart. I once again braved the sherry. All it did was intensify the heat, sending me to the kitchen for a spoon of lime juice to cool everything down. The sherry will likely go down as the most expensive bottle of cooking wine I've ever purchased. 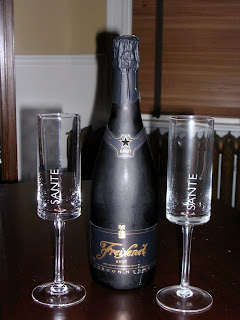 Our meal complete, we settled in to watch the ball drop. We switched back and forth between Dick Clark and some random X-Games dude jumping a football field on his motorcycle twice. At the stroke of midnight, we did need some bubbly -- and I went with my old standby, Freixenet cava. Fresh and crisp, this is one of my favorite sparkling wines. After a glass to start the year in a sparkling manner, we discovered that the flavor-cutting tendencies of sparkling wine made it the best pairing of the evening for both the blazin' mushrooms and the artichokes.

Not long after, we called it quits. I put a stopper in the cava to save it for New Year's mimosas; we cleaned up the kitchen more or less, and crashed. I can only hope that the rest of 2008 is as much fun as New Year's Eve was (and we will get ourselves to Spain at some point), and I hope all of you started the year out on a good foot. Welcome to 2008, everyone!