Now that I've had a couple of days to rehydrate so that my brain feels less like it's been slow-cooked in bacon grease, I can start the Vine train rolling again.

For those who haven't followed the Vine since its inception, the Sweet Partner in Crime and I hunker down each New Year's Eve, try some recipes that we haven't made before, open a bunch of wine, and generally enjoy ourselves while avoiding Amateur Night in the public square. This year, inspired by our Med Cruise and buoyed by a new cookbook, we decided to think Italian and embark on our own "Big Night." (Side note: if you haven't seen that movie and you call yourself a foodie, you're missing out in so many ways...)

The lineup for the evening (I waived my usual $15 limit, since this was a special occasion): 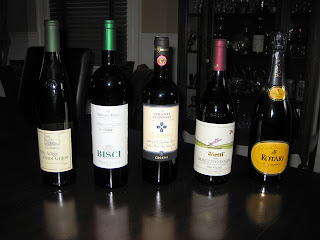 Aperitif: The Terlan pinot grigio -- to get us started, because how can anyone be expected to make an Italian meal without a glass or two of wine at the ready? Also, since there was a must-see basketball game on New Year's Eve, we had something to sip on while our various dishes started down their succulent courses. 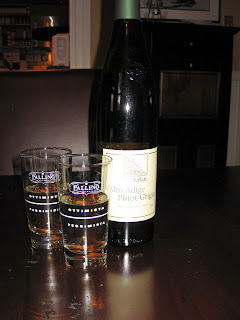 The Terlan was an excellent choice for a starter. This pinot grigio was much fuller and softer than many I've tried. Still a high-acid wine, for sure, but there was less of a citrus taste -- more melon and a crisp, strong finish that wasn't biting.

Antipasti: Our first course was a thinly sliced grouper marinated in lemon juice. The recipe initially called for non-Chilean sea bass or striped bass, but there wasn't any available locally that I could find. 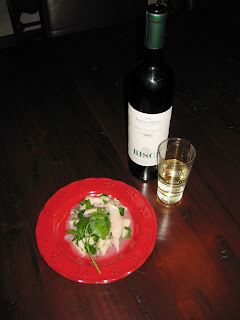 This dish is very similar to ceviche. If you're unfamiliar with ceviche, it's raw fish and red onion marinated in lime juice. The Italian version used flat-leaf parsley and lemon juice instead of lime juice and cilantro. The acidity of the lemon juice"cooks" the fish in a few hours, creating a fully-cooked, light, flavorful concoction. We tried both the Pinot Grigio and the Verdicchio with the dish. (The Verdicchio was a fragrant, peachy smelling white. Full-bodied and crisp, this had a little more oomph than the Pinot Grigio.)
Split decision. I liked the Verdicchio better, since I thought the fuller wine balanced the acidity of the lemon and brought out more interesting flavors. The SPinC preferred the pinot grigio, since she liked the "acid with acid" effect on all the citrus. Either way, you couldn't lose.

Primi: We followed the grouper with the produce of one of our new holiday toys -- a pasta maker. 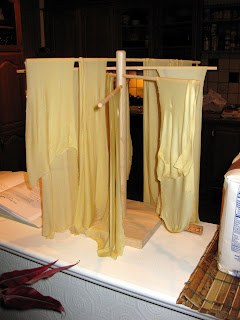 We wanted to play, so we made homemade linguini in a simple tomato & anchovy sauce became our pasta course. (Don't wrinkle your nose at the anchovies -- the sauce didn't taste fishy at all.) We sampled with both the Verdicchio and the Chianti Classico. The latter was the clear winner, although both wines got outshined by the pasta itself, which was heavenly. A regular Chianti would probably have been a good choice, or perhaps a Montepulciano d'Abruzzo. I don't know if I could get used to making my own pasta every day, since it's fairly labor intensive -- but the difference between homemade and store-bought pasta is nothing short of amazing. 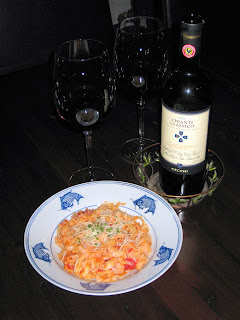 Primi parte due: Here, we broke from "traditional" Italian meal model. Soup generally does not follow pasta, but since we were stretching this meal out over the course of the evening, we decided to do this as a separate course. So, we settled on an an escarole, bean, and barley soup. With this traditional rustic Italian soup, we decided to go with a wine equally rustic. We paired this up with the Chianti Classico and had our first "WOW!" pairing of the evening. Chianti Classico can be a little rough around the edges taken on its own, but nuzzled up against a steaming bowl of this earthy concoction that we had going in the slow cooker for a few hours -- absolutely a heavenly experience. The earthy flavors in the soup deepened. The fruit in the wine shone through marvelously. We ate this course without saying too much, as we were so focused on the flavor. 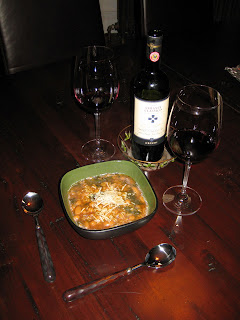 Secondi: For our main course, we did a pan-roasted veal shoulder stuffed with spinach and garlic. I'd never done a stuffed roast before, and I was a bit nervous about anything requiring the use of kitchen twine, but my fears were unfounded. The roast came out done to a turn -- and after plating it up, we were treated to the second "WOW!" pairing. Dolcetto is from the Piedmont region, home of Barolo and Barbaresco. Dolcetto is a fruitier, more acidic, more delicate wine than those two tannic monsters. The Vietti has a deeply fruity, slightly smoky nose and a wonderful balance of fruit and tannin in its medium-bodied style. As wonderful as the wine tasted, paired with the veal, it was absolutely sublime -- the perfect amount of tannin to cut through the fat, and the savory, delicate flavor of the veal married perfectly with the wine's fruit. Just exceptional. 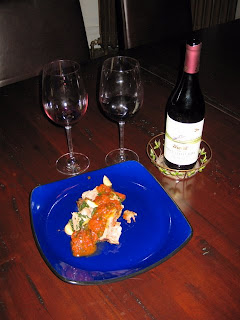 Dolci: Of course, we needed to finish with a sweet, so I poached tangerine slices in simple syrup, white wine, and lemon juice, then sprinkled them with some allspice. We rang in the new year with this, paired up with the Rotari sparkling wine. By this point in the evening, we couldn't properly appreciate the pairings, but we can safely say that it tasted pretty darned good. 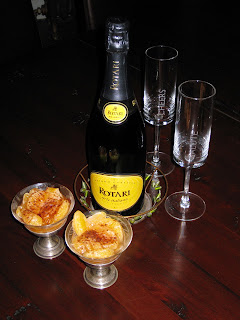 After watching the ball drop, we toasted in the New Year with the Rotari (and I added a shot of grappa...), slammed some water and headed for bed, full and happy.

In case you're interested, the cookbook we used was "Every Night Italian" by Giuliano Hazan. All of the recipes (except for the tangerines) are based on what we found there. Mr. Hazan was generous enough to give permission for me to reprint the recipes. Follow the links to get the individual recipes. If you're interested in the book itself, click here

to get it on Amazon.