Welcome to the March installment of the Wine/Dinner of the Month Club for my dear Christine. You may recall that last month was a pretty hearty affair with bruschetta, lasagna and a fairly rich dessert paired with a Super Tuscan wine. This month, we went lighter for both the meal and the wine. It turned out great, and once again Mike at the TNV was spot on with the wine recommendation. Bon appétit.

Mike suggested a light preparation of seafood to go with the sauvignon blanc. Christine is not a huge fan of seafood, so I thought this could be a challenge. After a little internet searching I found the shrimp recipe above. It is definitely a light dish with very little in the way of ingredients beyond the pasta and shrimp. Christine was in Texas that week helping take care of her nephews and sell her sister’s house (what a saintly sister) so I had plenty of time to go shopping and make preparations. Everything was pretty easy to find at our local Kroger grocery store.

One snag was with the shrimp. I’ve never actually cooked shrimp and the first thing I did was go to the fish counter and ask for a pound of pre-cooked cocktail shrimp. Fortunately I realized my mistake right away and had the clerk give me the uncooked shrimp. I can safely say, don’t be afraid of the shrimp. Once you drop it in boiling water, it cooks up in about three minutes perfectly. One other issue I had to deal with was the basil. The recipe called for fresh basil. Being March in Cincinnati, the only “fresh” basil I found was a small bag of hydroponically grown stuff that was a little wilted. But it worked in a pinch.

Christine got home around 3:00 pm on Saturday, March 27 and went straight to bed because she was totally exhausted. I started doing some prep work around 4:00. Mainly I segmented the citrus for the ambrosia salad and peeled the shrimp. One tip is that when you buy fresh shrimp ask if it has been de-veined (mine was). If it hasn’t, you’ll need to do that as well. Around 5:30 or so, I started preparing the meal in earnest while Christine revived herself. I opened the wine, and we sat down for dinner a little after 6:00. It was a pretty quick prep time for all the courses, so it would be something that could be whipped up on pretty short notice. 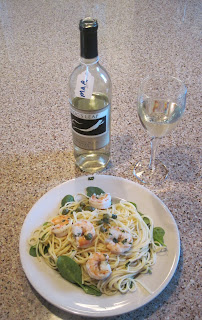 As I mentioned, the shrimp pasta was very light in flavor. The capers provided the strongest flavor, but there were few of them in the dish so they were not overpowering. The olive oil provided some moisture to the pasta and the lemon juice gave just the right amount of tartness and citrus punch. Because the flavors in the dish were so light, the wine was really able to show through without being covered up. The wine had very bright fruit flavors of citrus and pineapple and went very well with all the flavors in the dish, including the slight bitterness provided by the baby spinach.

After the pasta course, we took a little break while I prepared the salad. It was a simple mix of greens with cucumber and raisins. I had mine with a creamy ranch dressing and Christine had hers with strawberry vinaigrette. The wine provided a nice accompaniment to the salad course, though it was a better match to the pasta course. 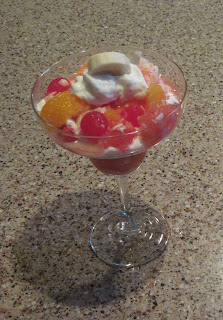 For dessert I settled on Ambrosia Citrus Salad. Yes, Ambrosia, that staple of family reunions, church suppers and college cafeteria salad bars. Most ambrosia recipes are simple canned affairs (a can of fruit cocktail, some canned mandarin oranges, etc.). This recipe calls for fresh grapefruit and oranges, which is a refreshing change. It made for a nice light dessert, and the grapefruit and oranges provided an excellent citrus bridge to the main course. I left out the miniature marshmallows, but added plain yogurt to make ambrosia parfaits. Everybody loves parfaits. On reflection, I probably would have just served the ambrosia by itself. The citrus fruit and coconut went well with the sauvignon blanc, but the yogurt tended to cover up the flavor of the wine, making for a less than perfect pairing.

Preparing these meals is always a learning process and I find it helpful to do a little debrief to see what could have been done differently. First, I wouldn’t add the yogurt to the ambrosia. It can stand well enough on its own and would be a better match for the wine that way. Second, while the wilted hydroponic basil worked okay, fresh is always better. I can definitely see having this meal again in late summer, sitting on the deck in the cool evening air after picking a few fresh basil leaves right out of the garden and the wine chilling on ice.

Fabulous blog Jeff! It does sound like a lovely dish to make again this summer. Maybe next time it will be after an long bike ride or hike instead of an exhausting week of watching nephews!! That Christine is indeed saintly.

Jeff, you are becoming a mighty fine gourmet cook while pursuing your love for wine. I am soooo impressed!!!! Come visit soon! We'll all be saintly.