Guest Column – Wine & Dinner of the Month Club – May

It’s May, and spring is in the air. Summer is just around the corner and that can mean only one thing–it’s grillin’ time. This is the first wine and dinner of the month that used the grill and the results were excellent. We had a nice Asian grilled chicken, Thai inspired salad and a yummy desert, all washed down with a great wine.

I started preparing the meal by making the sugar snap pea appetizer. You can serve this hot, but I preferred to let it cool to room temperature, which allowed me to make it ahead of time and not be as rushed to get everything together at once. I served the peas as a side dish and coolness of the peas provided a nice contrast to the warm chicken. Another time saving step was to plate the salad greens ahead of time and put them in the refrigerator, ready for their final preparations.

Once I started the meal in earnest, preparation went pretty quickly. The chicken needed to marinate for about 15 minutes in a fairly simple sauce, so that was a perfect time to start cooking the jasmine rice over which the chicken would be served. But perfection is not my forte and I, unthinkingly, actually started the rice before preparing the marinade. So the rice sat in the pot a while, but it stayed warm and was none the worse for it. The lesson learned there was to give a little thought to timing.

After the chicken was done marinating I put them on the grill at high for six minutes per side, basting them with the left over marinade. I brought them into the house and Christine asked if they were done. I said, “Sure they are!” indignantly. Christine had suffered from food poisoning in college so she is a little paranoid about underdone chicken and convinced me to cut into one to check. Good thing she did because the thicker parts of the chicken breasts were just barely cooked. In my concern to avoid overcooking I had pulled them off too early. Properly chastised, I put the chicken back on the grill for two minutes more per side. This time they came off safely done and also moist and tender. The lessons learned here are to always check the chicken for doneness and listen to your wife when she is trying to keep you from giving both of you food poisoning.

I plated up the chicken over the rice with the sugar snap peas on the side. We opened the chilled wine and sat down to dinner. 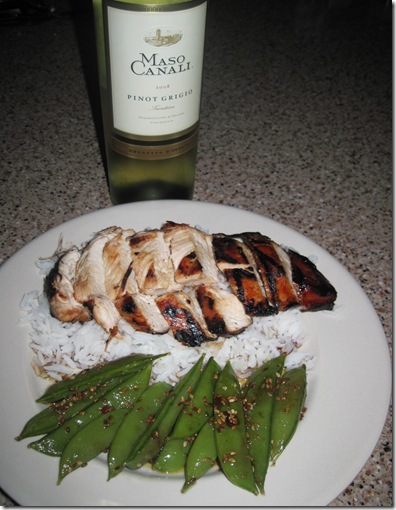 Both the sugar snap peas and the chicken marinade had some ginger in them, but just enough to be flavorful without being overwhelming. The sugar snap peas also had a dusting of toasted sesame seeds which gave them a nice nutty flavor. The wine was crisp with flavors of citrus and maybe a little green apple, and was not overly dry. It had just enough residual sweetness to complement both the chicken and the side dish.

After the main course I prepared the salads by topping them with canned mandarin orange slices and peanuts to give them an Asian flair. The dressing was a simple soy ginger dressing from a bottle. The wine went very well with the salad. 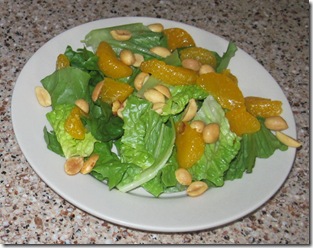 After the salads we took a little break from the meal and I took some time to clean up the kitchen before starting the dessert. The dessert is very simple but provided a tense moment and then comic relief. The whole idea is to wrap bananas and brown sugar in spring roll wrappers and deep fry them. I have never used spring roll wrappers and when I opened the package they looked like floppy plastic discs. “Oh, well,” I thought, “they must work.” So I tried rolling one and it broke in several pieces. Stupidity being defined as doing the same thing over and expecting a different result, I was pretty stupid because I broke three more (as if by sheer strength of will I could make them work) before Christine got on the internet and looked up how to use them. The trick is to moisten them and then they become almost papery and sticky.

Having figured this out, I rolled up the bananas with the brown sugar and put them in hot oil to deep fry. I only left them in for about 15 seconds per side, but that was actually too long and burned them a little. I would recommend putting them in the oil for only a few seconds and rolling them around until they are cooked to a nice golden brown. I put them in bowls and after letting them cool a little added vanilla ice cream and a little whipped topping. 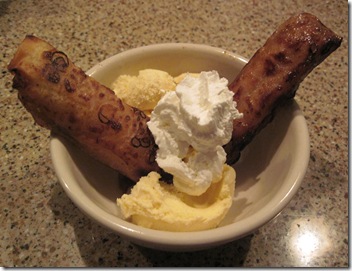 The brown sugar had caramelized inside the spring roll wrapper and that, combined with the soft banana and crispy outer coating made for a delicious ending to the meal. The only real problem was that the spring roll wrappers were a little too big for the banana pieces which created some thickness on the ends and made that part of the rolls a little chewy. If I had it to do again, I would trim the wrappers to reduce the size.