Wine and Dinner of the Month Club–October 2011


After being chastised by my editor for tardiness last month, I made sure to get this entry written in time. I did; however, my lovely assistant had a month of intense work and travel and in her not-so-usual way, submitted the article late. She also thought she deleted the photos, but happily found them included with the Hallowheeling “Pollination” photos. 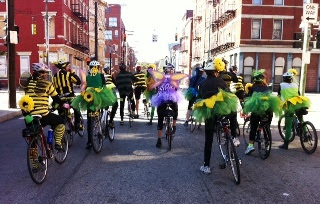 In early October Christine and I were in Washington, DC and went to dinner with her parents at Taste of  Morocco in Arlington.  After enjoying all the great flavors, I decided that this month’s dinner would be a Moroccan feast.

Though it looks involved, the entire dinner was really pretty easy.  There was some prep time involved, but once you got past that it all went quickly and a lot of it could be done ahead of time.  I was home for the day so I was up early working on the meal.  The first thing I did was bake the cake to get that task out of the way.  Next I prepped the salad ingredients which involved slicing dates and pealing and cutting up the celery.
It was helpful that this step could be done ahead of time and the ingredients stored in the refrigerator until dinner time.  Next I started on the bastilla.  The ingredients for this dish can be prepared ahead of time as well and assembled later.  After preparing everything and putting it in the refrigerator I even had a little extra time to go outside and work on the deck.  Who says I can’t multitask?

About half hour before we planned to eat, I started cooking the bastilla, placing sheets of phyllo dough in an oven proof pan, adding the filling, and cooking it for about 15 minutes.  While it was cooking I stuffed the dates with goat cheese and almonds and started cooking the couscous.  You may remember the stuffed dates from an earlier dinner.  At that time I stuffed the dates with parmesan cheese and walnuts.  This time I switched to goat cheese and almonds for a more Mediterranean twist. 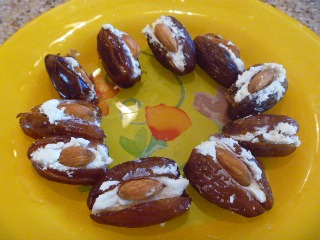 After we had the stuffed dates, I assembled the salad by mixing the celery in with coarse salt, shaving some parmesan cheese on top and sprinkling it with balsamic vinegar. 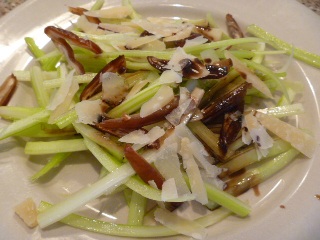 I served the warm bastilla with the couscous on the side.  The bastilla was filled with an egg and chicken mixture surrounded by an almond, cinnamon and sugar mix.  Additional sugar and cinnamon is sprinkled on top creating a delicious combination of savory and sweet.  I have to admit, when I researched bastilla, chardonnay did not come up as the best pairing, but we thought it actually went very well.  The chardonnay was crisp with a bright acidity that complimented every course. 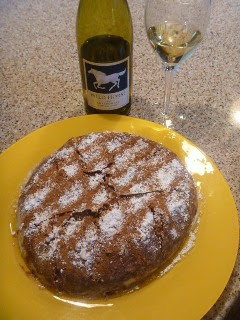 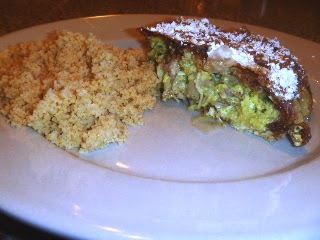 We ended the night with a slice of orange cake before heading off to our local theater company to see Debbie Does Dallas the Musical.  But that’s another story.