For most events, an inexpensive bottle (such as most of the ones we normally discuss around here) will suffice. Anyone who wends the way through this social maze knows that people are usually looking for something palatable to quaff so that making small talk becomes more bearable.

That’s not always the case, though. Sometimes you need a special bottle – something with a little more flavor and complexity for a more meaningful occasion. As we’ve discussed in this space before, the end of the year is the best time to snag major bargains for your cellar or gift bag since wine stores are trying to clear inventory to make room for “next year’s model.”

This opportunity is further amplified by the continued economic doldrums. The super high end stuff that can cost hundreds – wines like classified growth Bordeaux, Screaming Eagle cabernet from Napa, rare Barolo and the like – they’re always going to sell. There will always be collectors who can afford them. On the other end of the scale, the demand for the $15 and under bottle increases as wine drinkers are more judicious about discretionary income. The market slice getting hammered are the wines with “in-between expensive” price points – say $20-100. Ask almost any wine buyer. These wines just aren’t moving very well.

Here’s where you can score big if you look closely. There are “in-between expensive” bottles just sitting out there. If you’ve read those descriptions on shelves in wine stores, you’ll see many lines like “Drink between 2005-2011.” Odds that these wines will sell briskly after that window closes? Small. Wine stores need to clear these puppies off the shelves, so many of them get offered at enormous discounts. You can also find good values looking for wines that are from neighboring regions to super-expensive wines, especially if you’re thinking about French wines. For instance, a wine from a classified growth chateau may be hundreds of dollars a bottle, but a wine produced a few hundred yards away from similar grapes can go for a fraction of that cost.

Feel free to use these ideas as a great way to either score cool gifts or try some higher-end stuff that you might not have had the opportunity to crack on your normal travels. Take advantage of this. Go to your wine store and ask your friendly neighborhood wine guide to show you some “special occasion” wines that they have on end-of-vintage sale and see what happens.

Great example – the Sweet Partner in Crime and I got hitched a couple of years ago on Dec. 10th. As readers of this space know, we’ve been together awhile. Prior to our actual wedding, we’d used Dec. 18th, the date of our first date, as our anniversary. So we wouldn’t have to choose, we deemed these eight days our “Channiversary.” For our celebration this year, The SPinC went looking for three bottles – one from 2001 (the year we met), one from 2009 (the year we tied the knot), and another bottle, because things work better in threes. Here’s what she came up with:

La Croix de Rameaux 2009 Brouilly – The SPinC is a sucker for Burgundy, so that’s what she asked about first. Burgundy from 2009 would be too young to drink now, but she was pointed in the direction of Beaujolais (which is, after all, in Burgundy). 2009 is, by all accounts, one of the best years in Beaujolais in history, and the cru Beaujolais are not only exceptional – they’re ready to drink right now! (A Beaujolais cru will have the name of its city instead of “Beaujolais” or “Beaujolais-Villages” on the label.) Many Beaujolais, including cru,  can be a little thin, but not this Brouilly. For a light red, this had an exceptionally friendly and layered fruit and acid balance. Lots of full cherry flavors and a smokiness that was more reminiscent of a Burgundy than a Beaujolais. It was good on its own, but it truly shined as a charcuterie wine. (Which was good, because we didn’t feel like cooking the night we opened it.) With the serrano ham (oh yes!), salami, and chorizo we’d laid out...all delicious. We found it was also especially good with goat cheese, a usually-challenging pairing. Just a lovely wine to munch with. Ordinarily $32, we got this one for about $24. 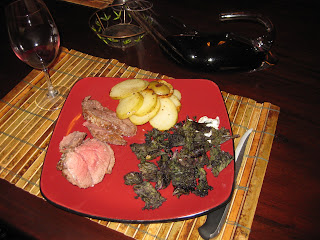 Il Bosco 2001 Cortona Syrah – Italian syrah? I think I’ve seen some of it blended into Super Tuscan wines, but I don’t remember it as a single varietal. Apparently more and more Italian winemakers are giving it a go but, until recently, these wines were much more a boutique purchase. This was the wine with the “Drink between” dates I mentioned above. Strike while the iron is still hot! Goodness, was this some tasty wine. My initial comment was “it smells more Italian than it tastes.” (Although I didn’t have much of a basis for comparison with syrah.)  The nose is lovely. Plums, flowers, and smoke. Lots of earthy blackberries and cherries on the palate with a hint of that underlying Italian chalkiness. There’s also some smoke that got amplified towards the end as the tannins kicked in, leaving coffee behind. Wonderfully complex. I’d certainly be interested in trying more straight syrah from Italy. For dinner, we had salt-crusted roasted leg of lamb. Heavenly pairing. Cut straight through the lamb’s fattiness, enhancing the rich flavors. Super. A $80-ish wine that ended up at around $35.

Chateau de Bellevue 2000 Lussac-St. Emilion – I readily admit that I don’t usually get Bordeaux. It’s just not one of those Old World wines that I generally crave the way that I do Burgundy or various Italian bottles. Just the same, a nearly 12-year old bottle has an appeal, and I’ve since learned that 2000 in St. Emilion was a historically good vintage. In retrospect, that little factoid makes perfect sense. We decided to open this with an attempt at making a more-or-less true cassoulet. (Mmm…rendered duck fat!) We got to cooking and I poured the wine into a decanter. Bordeaux are notoriously slow-breathing wines. After about an hour and a half, we decided to try a glass. Oy! Tannin bomb, coming in! This wine gave both of us lockjaw. We couldn’t speak. Heavy charcoal and graphite. We decided that it needed a little more time to open, and we had an hour or so before the cassoulet came out of the oven. In the interim, I swirled the hell out of what was left in my glass for awhile, and hooboy -- was I ever rewarded. The wine started to open beautifully. The nose exploded into herbs and chocolate covered cherries. The charcoal and graphite powered flavor mellowed into a much more pleasant balance of cherry and smoke. The finish went on and on and on. The wine continued to change over the course of the evening, yielding more and more complex flavors. This was the big deal about Bordeaux. 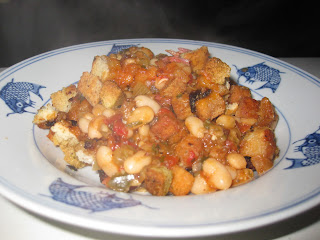 With food? Ye gods. While waiting for the cassoulet to finish, we tried it with some “drunken” goat cheese. Absolutely outstanding. A true “eyes rolling back in your head” combination…at least until we finally got to the cassoulet. Heaven. There really aren’t words for how good this pairing was. We did a version of cassoulet with ham instead of sausage and smoked duck. The smokiness of the wine complemented the rich duck perfectly, while the tannins tamed the salt from the ham while cutting through the fat. We lingered over this meal and the last drops of wine in the decanter for a long, long time, savoring. Perfect pairings come along rarely – those French know what they’re doing with wine and casseroles, to be sure. Many 2000’s from St. Emilion currently run well over $100. This wine from the surrounding region? $30.

So go forth, find bargains, and enjoy your holidays! We’ll see you in 2012!