Jeff's Wine & Dinner of the Month Club: The Last Hurrah!

Editor's Note: It is with a heavy heart that I present the last entry of Jeff's Wine & Dinner of the Month Club. What started as a birthday present for his lovely wife, Christine the Pie Queen, turned into a two-year labor of love for the Vine. Many thanks from the bottom of my Vinous heart for his well-written, love-driven, good-eatin' entries.

Jeff, if you didn't live across the alley, I'd sure miss you...

****************
This is the final entry for the Wine and Dinner of the Month Club.  I started this as a present for my wife – a paired wine dinner cooked by me each month.  It’s been very well received and I plan on continuing to prepare the meals each month for Christine, but I won’t be blogging about them.  Thanks to all my readers and enjoy this month’s entry.  With the exception of the Coq Au Vin, for which I provide a link, the recipes come from The America’s Test Kitchen Family Cookbook, Third Edition © 2010 by The Editors at America’s Test Kitchen.  January is also Christine’s birthday month, so I added an extra dessert wine as a special treat.

I woke up early on the day I was preparing the dinner and started the Coq Au Vin.  This entailed browning the chicken and layering it over the chopped vegetables in the slow cooker.  I set the cooker on low and went about my day.  Don’t be surprised if the recipe seems oversized.  The chicken and vegetables cook down considerably and while I thought we were going to be eating leftovers for days, we actually had just enough for the two of us with a little for one serving left over.

Later in the day I started the French onion soup.  I cut the recipe to one quarter what was called for and it came out to be the perfect amount for two.  I simply cut up the onions and sautéed them in a sauce pan.  The recipe calls for using a Dutch oven, but we don’t have one so I improvised with the saucepan and it worked just fine.  Once the onions are dark and sticky (about 30 minutes) you add beef and chicken stock and some other ingredients and let it simmer.  In the meantime I baked a baguette and cut it into some slices to top the soup.  When the soup was ready, I dished it into our new soup bowls (given to us by Christine’s parents for Christmas) and floated the bread slices on top.  These I topped with some shredded Gouda cheese and put into the oven until the cheese melted.  The recipe called for Swiss cheese, but we had Gouda in the refrigerator so, again, I improvised.  The soup was hearty with a smoky flavor and was excellent with the Burgundy. 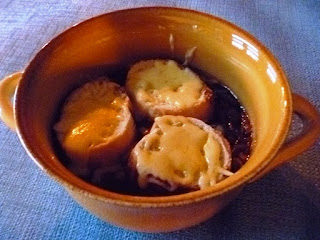 After the soup course, I dished up the Coq Au Vin.  This dish can be served over rice or couscous, but I didn’t think it needed anything added to it, particularly since we had already had the soup course.  However, I did serve it with the rest of the baguette.  After being in the slow cooker all day, the chicken literally fell apart, so it made sense to eat it more like a stew (thank goodness Christine’s parents gave us four soup bowls for Christmas).  Like the soup, the Coq Au Vin was hearty with deep rich flavors that went very well with the Burgundy.  Even novices like Christine and me can appreciate wine pairings.  A light white wine would have been swallowed up by the rich flavors of either the soup or the Coq Au Vin. 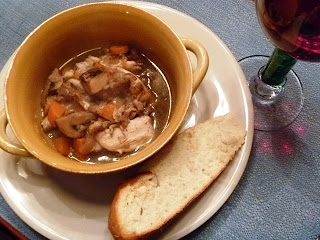 Finally, we had dessert.  Christine’s favorite cake is German chocolate, and it’s become a tradition for me to make it every year for her birthday in January.  I paired with the d’Arenberg Noble Wrinkled Riesling.  The wine was a very sweet dessert wine but not cloying.  The cake, while being sweet, is made with semi-sweet chocolate so it is not overly sweet.  I actually think this helped it pair well with the wine.  If the cake had been too sweet, I think it would have been a little overwhelming given the sweetness of the wine. 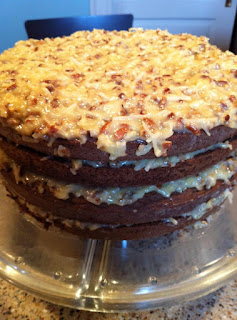 And now, a word from Christine the Pie Queen:

I have thoroughly enjoyed my two years of wine-paired meals that have been amazing (ribs!), fun (WV debauchery and KY neighbor brunch!), at times strange (jell-o!), fattening (four cheese lasagna!) and just plain wonderful, cooked and served with love by my hubby. Thank you Jeff!

How does one motivate their partner to start cooking?  What is my secret, sly recipe?  Well, I did it with a little help from a friend of mine at The Naked Vine.  Mike had been the inspiration for Jeff to start brewing beer and making hard apple cider (both of which he does extremely well) and so, I said to Mike, “Now, how can we get Jeff more interested on the food side?”  I do the majority of the cooking around the house and just wanted to share that “joy” with Jeff.  Along comes my birthday and Jeff decides to buy me 12 bottles of wine for the next year.  He goes to Mike for wine suggestions and *BOOM* Mike sees his opportunity and suggests pairing each of those wines with a home-cooked meal…the rest now documented in pixels.  Quite a success story!  Thank you Mike!

And thank you, Jeff and Christine! Cheers!
Posted by The Naked Vine at Tuesday, January 31, 2012