“Believe it or not, football players all want to be wine drinkers.”
-Daryn Colledge, Arizona Cardinals offensive lineman & winemaker.

Start with three NFL football players weighing over a half ton combined; sprinkle in a business venture and good-natured rivalry with a Hall-of-Fame caliber defensive back; add some cabernet sauvignon grapes. Mix well. What have you got?

The aforementioned large individuals are Daryn Colledge, Tony Moll, and Jason Spitz, all current NFL players. The three were drafted in 2006 by the Green Bay Packers out of Boise State, Nevada, and Louisville respectively. A combination of talent and injuries landed all three in the starting lineup for ten games as rookies. The seeds of a lifelong friendship friendship were sown. And over a conversation at Milwaukee steakhouse “Carnivore,” so was a different project…

"We'd had a few drinks, a huge dinner and we were all talking about being fat. Somewhere along the line, the idea came out and the name followed. The details after that are a bit cloudy," Daryn Colledge declared.

I had the chance to chat with Colledge for a few minutes as he took a break from his daughter Camryn tugging on his beard.

“Wine kind of snuck up on me. We did it initially just for ourselves and to be able to give some away as gifts. But people we knew who really knew wine said, ‘This is really good. You should try to sell it! It kind of went from there,” said Colledge.

One of Colledge’s teammates in Green Bay was Charles Woodson, future Hall-of-Fame cornerback – himself a winemaker. At a party sometime after the aforementioned carnivorous feast, they cornered Woodson and his winemaker Rick Ruiz. Some negotiations ensued and Three Fat Guys emerged.

To Colledge’s credit – he didn’t rise to the bait when I asked him who made better wines: offensive or defensive guys. He chuckled and said, politically, “You know that we’re each going to argue for their own side. Charles Woodson’s legacy and talent speaks for itself, and he’s been making the stuff a little longer than we have. He makes really good juice, and I like to think that we’re right there.”

Three Fat Guys released its first vintage in 2007. That was after the triumvirate’s second season in the league. I noted that they all must have been 24 or 25 years old. I was impressed. At 24, I thought Rolling Rock was high-end stuff. I asked Colledge how he got into wine so early. “It has a lot to do with the culture of the business that I’m in. In the offseason, you end up doing a lot of charity auctions and the like, and wine gets served. That’s what really got me into it. Then throw in Tony. He grew up in Sonoma, so he was around it as a kid. So when we’re over at his place, you know that’s what you’re getting.” 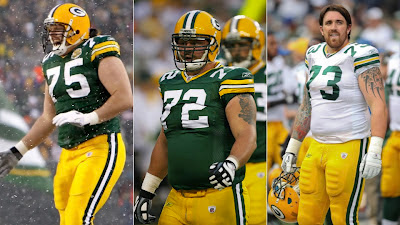 Colledge gave the nod to Moll for “best palate” honors. “Tony and Jason probably argue over the flavors more. I have to give the nod to Tony, though – he’s just been around it so long. He leads wine tastings in the offseason when he goes home and such.”

Three Fat Guys was good enough to send along a couple of samples. The bottles themselves are heavy enough to register as deadly weapons. These bottles have the deepest punt I’ve ever run across, perhaps as a tip of the cap to their special teams brethren. (WineSpeak: the “punt” is the dent on the bottom of the bottle.) 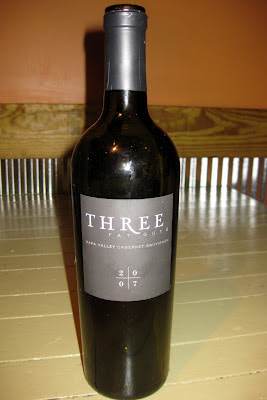 The 2007 is, not to put too fine a point on it, a vanilla bomb. The nose hits with a big whiff of vanilla and cassis. It’s medium-bodied for a California cabernet. The Sweet Partner in Crime described the powerful flavor as “strawberries and blueberries slathered in vanilla.” It does calm down a bit with some air. The finish is moderately strong with vanilla and some grippy tannins. If you’re a cab drinker that likes a big ol’ fruit-forward bottle, the ‘07 will be right up your alley. Myself, I think a couple of years might serve this well.

The 2008 was a different story. Nose is still full of vanilla and dark fruit, but it’s more balanced with some fresh cut wood and earthy scents. The flavor was much more balanced. Vanilla, blackberry, and oak all mingle very pleasantly. The finish of even tannin, vanilla, and fruit was much longer than the ‘07. This one pushed the right buttons for me.

Since many California cabs are fairly consistent from vintage to vintage, I asked Colledge how much tweaking they’d done with the mix. “We do a fair bit of sampling during the process to try to find what works best. We’re split on the vintages – Jason really likes the ’07 and Tony & I prefer the ’08. We offer up our ideas and our preferences, but the real genius lies with our winemakers: Rick and Gustavo (Gonzales). They’re amazing. Rick & Gustavo both say that the ’09 is going to knock it out of the park. We’re excited, to say the least.”

I asked Colledge about his suggestions for food pairings. “Well, you know I’m an offensive lineman, so I’m pretty much a traditionalist. Steak and potatoes are my thing, and I love it with them.”

I’d already broken into these wines before I spoke with him. I’d made this pretty tasty Asian beef & basil stew over some rice noodles a few nights before. The suggested pairing was a cabernet, so we used that as an excuse for our side-by-side. Both wines went well with this particularly yummy dish, but the ’08 was a particularly luscious pairing. The flavors ricocheted perfectly.

The three have all moved on from Green Bay. Colledge is now with the Arizona Cardinals. Moll is with the San Diego Chargers and Spitz is with the Jacksonville Jaguars. The wine helps their bond strong. “I like to think it’s one piece of what holds us together. We really forged a great friendship in Green Bay. We’ve all gotten older and gotten married. We’ve all got kids or kids on the way. But we always make sure that we take at least one trip together to California each year to celebrate the new vintage.”

Since “wine tasting” and “testosterone” generally don’t occupy the same sentence, I asked Colledge as we were wrapping up how his teammates reacted to his hobby. Are they into it? Do they give him shit? Colledge laughed: “You might not think it, but football players all want to be wine drinkers. They want to be able to do the business thing and seem sophisticated. But as for my teammates, they’ll tell me that they’re into it, but I know most of them just want free wine. So, we drop a couple of free bottles on them, then make them go through the distributor and jack up the price once we’ve reeled them in.”

A tried-and-true business model, to be sure. If the 2009 vintage makes the same sort of leap that the 2008 did, they’re certainly on to something. They also are in the planning stages for a “Skinny” chardonnay with their wives as consultants. For more information, you can check out http://www.threefatguyswine.com and/or follow on Twitter at @3FatGuysWine

(A final tangential observation: With the advent of fantasy football, offensive linemen have become the last players hometown fans can root for unreservedly. While a sizable number of “home team” fans in the stands may be rooting for an opposing running back to have a 3 TD day or an enemy linebacker to have multiple sacks, few leagues give fantasy points when a play happens the way it should.)
Posted by The Naked Vine at Monday, May 07, 2012