“If God made anything better, He kept it for Himself.”
-William S. Burroughs, Junky

The Sweet Partner in Crime and I talked for years about a vacation to Oregon. We’d always wanted to see Portland and we hoped to visit my cousin in Eugene. I wanted to return to Crater Lake to take the (spectacular!) boat ride that I’d adolescently skipped twenty years prior. And we wanted wine, of course.

Oregon, specifically the Willamette (rhymes with “Dammit!”) Valley, is known best for pinot noir. The area is nestled between the low Oregon Coastal Range mountains on the west and the tall Cascades on the east and stretches from the Columbia River on the north to just south of Eugene. The entire valley comprises about 3.3 million acres. The Willamette Valley’s temperate climate is quite friendly to those cool-weather loving grapes. (France’s Burgundy region is at the same north latitude, not surprisingly.)

The most common appellation you’ll see on a bottle of Oregon pinot is “Willamette Valley AVA.” AVA is WineSpeak for “American Viticultural Area” – the wine growing region. That designation means the grapes were grown within the valley. There are six sub-AVA’s within the larger Willamette Valley: Chehalem Mountains, Ribbon Ridge, Yamhill-Carlton, Eola-Amity Hills, Dundee Hills, and McMinnville. Each has distinct terroir.

Oregon’s fascinating topography, carved by glaciers, volcanic eruptions, wind, and water, contains wildly different soil types. The soils do fall into two major categories: marine sedimentary (which generally imparts an earthy complexity) and volcanic (which yields a fruity smokiness). Some vineyards have both soil types, often within a few hundred feet of each other.

The first pinot noir from Oregon was produced in the mid-1960’s, and Oregon became a major player in the market in the 1980’s.When Sideways kickstarted the California pinot boom in the mid-2000’s, Oregon pinot producers came along for the ride. Oregon pinot is very different from California pinot. In general, the terroir of Oregon produces a more subtle, lower-alcohol juice, which created a nice contrast for wine connoisseurs. Oregon pinot made a name for itself, and prices rose.

Alas, the mass market, fueled by our old friend Miles, demanded pinot. Inexpensive pinot from places like Chile and Australia, as well as some…shall we say…less-well-crafted-but-cheaper California offerings flooded the market. $10-15 pinot made in a big, fruit-forward style became common. Also, thanks to California’s maddeningly consistent (but beautiful) climate, a casual wine drinker usually can be fairly confident of what’s in the bottle. A 2010 wine from a particular producer in California will taste a lot like a 2009, which in turn will taste a lot like the 2008, and so on. Oregon’s climate has much more variation, so specific vintage plays a huge role in a wine’s flavor.

For a while, it was difficult to locate much Oregon pinot at local wine stores. California pinot ruled the roost of mid- to high-end domestic pinots, and Oregon’s low-key marketing approach (not to mention many fewer wineries) caused a pricing problem. A few major producers (Domaine Serene, Domaine Drouhin, Erath) were able to keep up – but a good number of the mid-sized and smaller producers had to make some major readjustments. As a result, very high quality Oregon pinot became available for about half what you’ll pay for a premier cru Burgundy.

Many Oregon wines really hit my palate’s sweet spot, particularly those from Eola-Amity, Yamhill-Carlton, and Ribbon Ridge. I thought many of these wines had similar flavor profiles as good Burgundy, but with an addition of the “brightness” that American wines tend to exhibit. The following were our faves for quality & price. Some of these may be difficult to find in your local wine stores, but they’re all well worth a few website clicks:

Witness Tree Vineyard (Eola-Amity) – The “witness tree” is an ancient white oak that marked the corner of the historical boundary of the property. A lovely location for our first stop -- with a couple of very solid choices. While the Willamette Valley is known best for pinot noir, there are a few whites spread around as well. Witness Tree produces a wonderful estate Viognier, which was the best bottle of that varietal I’ve ever tasted at $15. Their estate cuvee pinot noir, called “ChainSaw,” was a steal as well at $20. http://www.witnesstreevineyard.com

Cristom (Eola-Amity) – One can almost see the Cristom winery from the Witness Tree parking lot.They specialize in slightly higher-end pinot noir which was well-worth the extra few shekels. In honor of our beagle, Jessie Louise, we took home two bottles one each from their “Jessie” and “Louise” vineyards. More like $40 for these. I had a nice conversation with their winemaker, Steve Doerner, who said, “I’m the winemaker, but I have plenty of help – a few thousands of helpers in the vineyard and 10-to-the-sixth in the lees…” http://www.cristomwines.com/

Spindrift Cellars (Willamette Valley) – A cool, unpretentious little place we pulled into on the edge of an industrial section of Corvallis as we were on our way from Eugene to Dundee. We learned that “spindrift” is the name for the foam that rises from the top of a breaking wave. The star of the place for us was their rosé of pinot at $16 -- a perfect picnic wine with much more complexity and depth than you’ll see in many pinks. http://www.spindriftcellars.com/

Twelve Wine (Yamhill-Carlton). We first tasted this at a fantastic wine store in Eugene called Authentica. Twelve is run by a husband/wife duo – he an electrical engineer from Silicon Valley (who still works in high tech as a day job), she a high school counselor. We ran through their entire gamut at their tasting room in downtown McMinnville. (The vineyard is in Yamhill.) The quirky story of the wine’s name, their wicked cool labels, and their downright friendliness added to the experience. The estate pinot ($25) had a wonderful richness that played along especially nicely with the offerings from the gourmet chocolate shop with which they share a tasting room. Their currently-sold out reserve, called “144” (12-squared, get it?) was exceptional. http://twelvewine.com/ 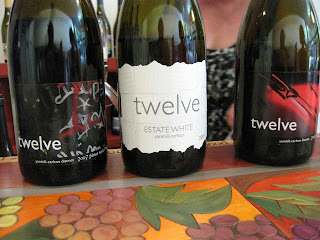 Patricia Green Cellars (Ribbon Ridge) – Patricia Green’s tastings are appointment only -- so we headed there semi-private late-morning tasting with eight other folks. We sampled 12 different wines from across three vintages, and two “futures” barrel tastings. The winemaker, Jim Anderson, sources grapes from many Willamette sub-AVAs, so we had an exceptionally educational experience. We experienced side-by-side the real differences between sedimentary and volcanic soil, as well as the wide variation that exists between vintages. We especially liked their “sedimentary” series, particularly the Etzel Block ($60), Ana Vineyard ($45), and their straight Estate ($30). They're also one of the few producers of sauvignon blanc ($20) in the Valley. Highly recommended on all counts. And we needed carbs for lunch immediately afterwards. http://www.patriciagreencellars.com/

Libra Wines (Yamhill-Carlton) – I’m writing a separate column on our experiences at Libra – a true vacation highlight. I’ll just say for now that Libra’s 2010 Willamette Valley Pinot Noir at $25 knocked the pants off almost anything else we tasted on the trip. Just try. It’s kickass. http://librawines.com/

If you decide to take a wine tasting tour around the Willamette Valley and you want to really pamper yourself, consider staying at the Le Puy Inn in Newberg. (http://lepuy-inn.com) Lea and Andy will take good care of you. Though there a number of top-notch restaurants in the area, make sure you have a meal at Tina’s (http://www.tinasdundee.com/), a favorite of Valley locals in Dundee. You’ll be glad you did.
Posted by The Naked Vine at Tuesday, September 11, 2012