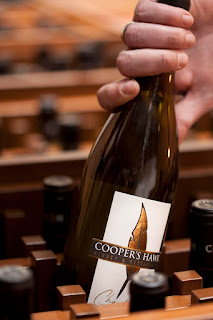 I was invited to attend the recent grand opening of a Cooper’s Hawk Restaurant, an “upscale-casual” restaurant boasting a tasting room at each location – all the better to serve their house wines. The tasting room is just the start. The wines apparently have enough of a following that Cooper’s Hawk has a wine club – according to them, the largest of its kind.

Illinois-based Cooper’s Hawk currently has 10 locations – seven in the greater Chicago area, one in Indianapolis, one in Milwaukee, and their newest location in Columbus, Ohio. Locations in Cincinnati, Kansas City, and Tampa are scheduled to open during the next year.

Unfortunately, I wasn’t able to attend the opening – so I can’t attest to the quality of the food (although the menu looks fairly wide-ranging and interesting). But thanks to Jennifer at Wordsworth Communications, I was able to obtain a couple of Coopers Hawk samples and score an interview with Rob Warren, the winemaker.

Rob, a native of Port Hope, Ontario, got his start working in wineries both north of the border and in northern Virginia. In 2007, he met the CEO of Cooper’s Hawk, Tim McEnerny, at a trade show. “We just got to talking and really hit it off. He said he was looking for a winemaker and I interviewed for the position. Next thing you know, here we are!”

Cooper’s Hawk has a very large catalog of wines. Their basic list of wines, including vinifera, fruit wines, and sweet wines, numbers about 40. Then there are the wines for the wine club. “We make 12 wines just for the club each year.” These wines tend to be lesser known varietals and blends, crafted especially for members who are usually looking for something a little different.

The blends seem to be where Cooper’s Hawk hangs its proverbial hat. “We try not to limit ourselves on the blends. Most wineries are limited to their own vineyards, or even their own region. I like finding combinations across terroir – like blending Washington and California grapes, for instance. We just do whatever we can come up with that we think will be awesome.”

According to Rob, the blends are the most popular wines in the catalog. “Among the reds, we do a blend of pinot noir, malbec, and barbera that people seem to like, as well as our cabernet sauvignon, cabernet franc, and zinfandel blend. Among the whites, our pinot grigio/riesling blend is a big hit.”

I asked Rob about the challenge of making wines for such a broad audience – a big wine club and a growing restaurant chain featuring his wines. “Our wines are made to be enjoyed right away, so I try to make something you can open, pour, and enjoy. I try to find a basic profile for a wine that I hope people will like. Once we know the profile we’re looking for, we can almost always match them up from year to year. Since we’re not limited by vintage dates or appellations, we have the flexibility to create consistent wines.”

Rob said that his real goal is to make wines that people enjoy enough that they’ll join the club. “Once they know they can get quality wine from us, we want them to join. They get discounts at the restaurant, and they can buy any of the 40 wines on the main list at a discount. We’ve got some other neat promotions for club members, too.” 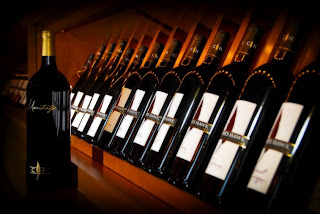 Cooper’s Hawk sent along a couple of bottles, one white & one red, for me to try. Neither of them were the popular blends Rob mentioned earlier, so I may have to visit one of the restaurants to check them out in the future. My thoughts on the two bottles:

Cooper’s Hawk (NV) Gewurztraminer – Very aromatic. Lots of tropical fruit scents on the nose – especially pineapple and papaya. This wine is definitely modeled after a “new world” Gewurztraminer. Tthe full, thick body has a fruit-cocktailish flavor of pineapple, apple, and that specific flavor of lychee. Quite full bodied, the finish turns slightly bitter at the end after some sweeter papaya flavors. On its own, it was OK. With a spicy Thai-flavored chicken soup, it worked well. The thickness of the body kept the tropical flavors from being overrun by the spices. The wine would be a nice pairing with most foods that register on the Scoville scale.

Cooper’s Hawk (NV) Pinot Noir – I wouldn’t necessarily agree with the “pop and pour” sentiment of Rob’s here. I thought this wine needed some time to open – otherwise, it came across as almost watery. After about 45 minutes of air, the fruit started to open up a bit. Even so, it’s an extremely light pinot. There are cherries and some soft wood on the nose, followed up with a light cherry flavor on the body. That’s most of what I got. The finish was light, a little smoky, and soft. There are some tannins that emerge eventually. It has the basic flavor profile of a pinot, but it’s not complex by any stretch of the imagination.

Pricewise, the wines retail at the restaurant from $15 to 40. The pinot noir I tried retailed for $22 and the Gewurztraminer was $18. I think both are a bit high for what you get, although if I’d bought either of those in a restaurant at those prices, I’d think I was getting a real deal – considering what the markup usually is. The wine club prices are $18.99 for one bottle monthly or $35.99 for two. There’s also a shipping option, where members would receive either 3 or 6 bottles quarterly for $80 or $140 respectively.

For more information, restaurant menus, wine lists, and the like you can check out the Cooper’s Hawk website at http://www.coopershawkwinery.com