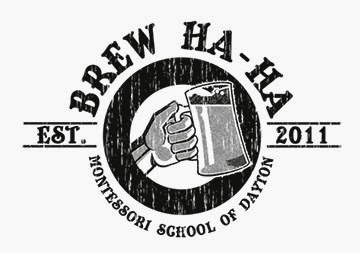 Picture a science classroom with a large pot of water, held at a stable temperature, steaming away on a burner. Given supplies of malted grains, hops, and other ingredients, students are offered the opportunity to select a mixture of their own to steep, boil, and eventually ferment. With a set of basic instructions and the guidance of a mentor, the students proceed through the steps of bottling tasty concoctions of their own creation. Sounds like a dream class, right?

Due to personal liability concerns and pesky state & federal laws, such a lesson likely will not be part of the science curriculum at the Montessori School of Dayton anytime soon.
However, MSD will be opening its doors on January 31st to the community for the 4th-annual Dayton Brew Ha-Ha, the school’s now-annual craft beer fundraiser. Adult brewers from across the state of Ohio will be demonstrating their individual masteries of the brewing process.

“The Brew Ha-Ha contributes to the capital improvement fund and has contributed to much-needed upgrades such as a new gym floor, energy-efficient windows, and a new HVAC system,” said Kevin Gray, co-founder of the event, alpha beer writer at the Dayton City Paper, and parent of three students at MSD. “Also, you can drink beer in an elementary school!”

Gray, along with two other MSD parents -- Brandy Gorham and Mike Taylor -- tri-chairs and coordinates the event. They see the Brew Ha-Ha as an opportunity for community members to mingle, sample, and learn about the worlds of craft brewing and Montessori education. “It’s fun to be able to describe beer to people and see their faces when they taste something new for the first time,” added Gorham. “I also enjoy the look on my friend’s faces when I tell them that my kid’s school is having a craft beer festival as a fundraiser, then being able to explain Montessori to them…that it’s not just a place where children go to ‘play’ all day. ”

The Montessori education model revolves around “discovery-based” lessons where students are offered a personal choice of subject matter, an array of materials, and the freedom to explore and create within a broad set of boundaries. There are no objective letter grades and students learn at their own pace. Assessment is based on accomplishment and a student’s demonstration of skills and maturity.

“For example,” proudly explained Gorham, “my son is gifted in math. He is learning algebra in fourth grade, but when he started first grade, he was behind in reading, so they provided him a tutor. Now he reads at a fifth or sixth grade level. They also teach very concretely. Math is taught [to young children] by working with beads and understanding physically how it works, not just writing numbers on paper…toddlers use items from shelves [in their lessons] from left to right and top to bottom, which prepares them for reading.”

MSD was seeking a fundraising opportunity for the aforementioned improvements to the facility, so parents at the school followed the spirit of their childrens’ classroom experience, where collaboration and common interest so often lead to inspiration.

Why something beer-themed? Montessori education has more in common with craft brewing than it might initially seem. As anyone who’s ever stood over a brew kettle can tell you, craft brewers follow a similar learning-by-doing process as they’re honing personal techniques and building beermaking skills. (Traditional definitions of “maturity,” however, are typically considered gauche among brewers.)

“There are a lot of craft beer geek parents at the school,” Gray related. “In late 2011, some likeminded parents and the school administrators decided to try our hands at a beer tasting. It came together in about 8 weeks and we held [the first Brew Ha-Ha] in January 2012. Although the first one was modest, [everyone had] a lot of fun and it was well received by the community. Attendance has steadily increased and last year, we saw our first sell-out crowd.”

While the somewhat mischievous notion of legally sampling beers in a school setting undoubtedly adds to the appeal of the event, the real draw is the beer. “We’ve always focused on regional beers…the first two years, we featured beers from the Great Lake states. [We invited brewers] from Ohio, Michigan, Pennsylvania, Illinois, and Indiana,” said Gray. “Last year, we realized that the Ohio market was so strong that we could pit it against the legendary MI market and had our first Ohio vs. Michigan showdown.”

The continued explosion of the region’s craft brewing gave the Brew Ha-Ha crew the opportunity to score a special distinction. The 4th Annual Brew Ha-Ha is the first beer festival in the Buckeye State to feature an All-Ohio lineup of breweries. “The state now has about 103 breweries, and we’ll be featuring 40 of them,” Gray added. “The Miami Valley breweries will be there, and many are reserving or brewing up special beers for the event. We are also excited to feature a number of breweries from around the state that aren't readily available in Dayton.”

One of the pleasantly unique elements of the event was initiated last year and expanded upon this year is the Brew Ha-Ha’s focus on education for craft beer newbies. “I try to remember how intimidated I felt when I first started learning about craft beer,” mused Taylor as he explained the event’s ambassador program, “The ambassador looks for people who seem confused or don't know what to try next. We engage them in conversation to find out what they like and direct them to another selection or introduce them to a new style they may have never tried. I still get a kick out of seeing people try new things and really enjoying the recommendation.” This year, the ambassadors will provide guides to the event broken down by beer flavor profile, so attendees who find a quaff they truly enjoy will be able to easily locate other selections which may tickle their fancy.

In addition, Gray uses his near-encyclopedic knowledge of beer to get the other parent volunteers up to speed on what they’ll be pouring. “I have [the volunteers] try a representative sample of the styles of beer we'll be serving and I give them some information about the beer styles, process, etc. I run through the full list…so that the servers can talk about the beers they are pouring and can recommend other beers.” The parental volunteers are then paired with representatives from the event’s sponsors, which are all well-known Dayton craft beer supporters.

Dayton’s largest local homebrew club, The Dayton Region Amateur Fermentation Technologists (DRAFT), also gets in on the act. DRAFT volunteers talk with attendees about the brewing process and act as an avenue for prospective homebrewers to get more information. BrewTensils, the area's largest homebrew shop, created “clonebrew” recipes for homebrewers to replicate some of the event’s featured beers.

While the number of attendees has grown each year, ticket sales are capped at 400 to maintain the boutique feel of the event and to allow attendees to converse with the ambassadors and learn from the representatives of the various brewing operations. “I think this level of knowledge and interaction has set us apart from many of the other massive beer tasting events,” Taylor said with a smile. “I think our attention to detail, supporting local, and providing craft beers that are accessible here in Dayton [and beyond] makes me feel proud. We have worked hard to make our event a ‘must attend,’ and I think we've been successful.”

All three chairs acknowledged the challenges of trying to put together a large event like this are magnified because the small organizing team have their other full time work and familial responsibilities, especially right after the holidays. “Kevin and I used to do everything,” Taylor explained, “But now we’ve learned you need lots of help. The event has grown from 167 people to nearly 425 last year. We now coordinate 45-50 volunteers, sponsor table volunteers and all the various vendors and distributors. With so many Ohio breweries self-distributing, this has added a new level of coordination, but in the end I think it will all be worth it to bring 40 Ohio breweries together in one location.” Gorham added, “I’ve been a volunteer for the event ever since the first year, and every year my responsibilities have increased.  Last year I noticed that the guys were struggling to get everything done, so I volunteered to help take on some of the burden on as well,” said Gorham, “I’m an engineer, so my strength is in project management. I also ensure that we are meeting as a committee on a regular basis.  Nothing like a meeting to make sure we all have our action items done from the last one!”

Even though the kids at the school are not directly involved with the event, they find other ways to participate. “They love the idea [of the Brew Ha-Ha] but are bummed that they can't participate in some way,” said Taylor. “We give them small tasks like making pretzel necklaces and helping to wash all the tasting glasses, which we hope makes them feel somewhat involved.” Gray says that his three kids love the event and get excited every year. “We usually have the gym set up Thursday or Friday before the event and it's exciting to hear my kids come home and tell me about how it looks.” Gorham puts on the volunteers’ after-party, which her two kids take great pleasure in “hosting.” “Any volunteers that are interested show up for some social time.  We all talk about the event and share what went well.  My kids love having everyone over to ‘their’ house.”

Tickets for the event are $35 – which includes admission to the event, a half-pint tasting glass, and ten tasting tickets. Taylor, who heads up the publicity and promotions for the event, is quite pleased by the Brew Ha-Ha’s expansion. “We started with ten sponsors and a 50/50 raffle which has evolved into 15 sponsors, a [considerably larger] silent auction and, new this year, games of chance -- a spin to win cash game and a beer bottle ring toss.”  Fresh pizza by the slice will be made on-site by Spinoza’s. During the last hour of the event, MSD will be providing complimentary coffee and desserts. Bottle sales and growler fills will also be available at this time.

The Montessori School of Dayton is located at 2900 Acosta Street, Kettering. For more information about the event or to purchase tickets, go to the Dayton Brew Ha-Ha website at http://brewhahadayton.com/


This story also appears in the Dayton City Paper.
Posted by The Naked Vine at Tuesday, January 27, 2015