The last jaunt the Sweet Partner in Crime and I made to California, we spent most of our time in the Sonoma Coast AVA. That close to the Pacific, the climate and soil yielded wines that were quite different from the Sonoma offerings to which we’d been accustomed. The coastal wines had, in general, more earthiness, less pronounced fruit, and a little rough-around-the-edges character that we really liked.

Fast forward to an offer I received to try an Italian coastal version of what would commonly be called a Supertuscan wine. To refresh your memory, the categorization of Supertuscan wines came about in Italy because some winemakers in Tuscany wanted to make wines above the quality of simple table wine, but didn’t want to follow the strict guidelines required to label the wines as Chianti or Brunello di Montalcino.

These blends usually included Sangiovese, but they often had other grapes like Cabernet Sauvignon, Merlot, and Syrah – leading to a bigger, fruitier product which found much favor Stateside. These wines are usually labeled “IGT” (short for Indicazione Geografica Tipica), rather than the inexpensive vin di tavola. 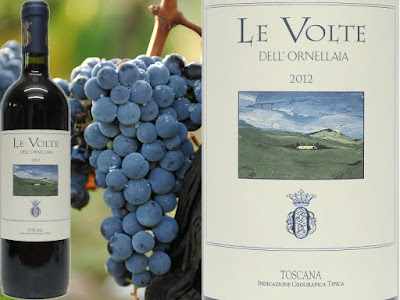 The bottle I received, the Le Volte dell’Ornellaia 2013 Toscana IGT, falls into that category – but looked to be a new experience for me because the Ornellaia estate is near the town of Bolgheri, which faces the Tyrrhenian Sea from the hills. The soil there sounds much like the soil in parts of Oregon – part volcanic, part marine sedimentary, and part alluvial – so I was quite interested to see how this wine would differ from the Supertuscan blends grown further inland in the Chianti or Orvieto regions.

This wine, a blend of 50% Merlot, 30% Sangiovese, and 20% Cabernet, pours somewhat lighter than many of the thicker IGT blends. Cool weather and coastal wines tend to be lighter in body than their warmer climate, inland counterparts. No surprise there. The nose is quite pretty – violets and some light stone fruit. The first sip, as the SPinC put it, is “straight-up Sangiovese” – light bodied cherries and chalk. Then things…changed.

The sensation was like someone fed the wine a Super Mario power-up mushroom halfway through the mouthful. Suddenly, I felt I had an eyedropper of dark fruits and tannin squeezed onto the back of my tongue. Imagine a wine with the eventual punch of a big California merlot, but without the initial fruitbombiness.

I thought, at first, this particular note may have been because I hadn’t decanted the wine long enough. Even a couple of hours later, I still got the same pleasantly peculiar perception.

For dinner that night, I’d grilled up some lamb loin chops with a side of grilled okra from our CSA share, some quinoa, and tzatziki sauce on the side. It’s definitely a meat-loving wine. It went fantastically with the lamb. I think it would certainly need to accompany richer fare – it would probably be too big for many chicken or pasta dishes, unless you had a good ragu over top.

I definitely enjoyed this wine. I thought it was an interesting twist on the often over-fruited Supertuscans – and I’ll certainly be looking for some other coastal Tuscan versions.

The Le Volte retails for around $30.

(Thanks to Claire at Colangelo for the offer.)
Posted by The Naked Vine at Tuesday, September 01, 2015