I tried to pull a fast one on the Sweet Partner in Crime. I failed miserably.

I was making one of my pastas a couple of nights ago. I take a lot of pride in my red sauces. While there’s not an actual drop of paisan in my bloodstream, I like to think my little creations hold their own. This night’s menu was an Italian sausage sauce with loads of fresh garlic, herbs, and mushrooms over penne.

Obviously, this ends up as a pretty muscular sauce, so I wanted a nice, big Italian red alongside. I had a bottle of Arnaldo Caprai 2010 “Collepiano” Montefalco Sagrantino to sample. Sagrantino, as you might remember from another recent discussion around these parts, is the tooth-staining “Italian Heavy Hitter,” a wine that could make an average Barolo ask, “Don’t you think you’re…overdoing it…a bit?” 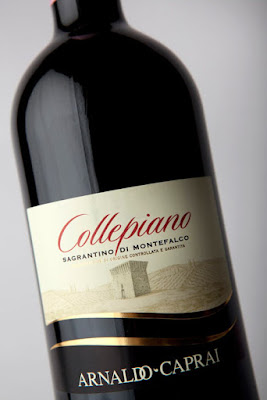 The previous times I’ve tasted these wines, the Sweet Partner in Crime gets about half a glass total down before pushing her glass away with, “I just can’t do it.” These are big, burly wines – but I personally don’t find them more powerful than, say, a California Zin or more tannic than a young cabernet. There’s just something about that wine’s combination of characteristics that doesn’t agree with the SPinC. Diff’rent strokes and all that.

So I had this bottle and I didn’t want to try it alone. A little subterfuge, perhaps? I told her that I had “an Italian red” to go with dinner and left it at that. I opened it a couple of hours early – since these wines desperately need air when their popped – in an undisclosed location. I poured a couple of glasses and brought it to the table.

“Big.” First word out of her mouth after her initial sip. “Tannic and strong. Kinda hot.” A couple of bites of pasta later, she takes another drink, looks me square in the eye, and said, “Is this one of those big Italian reds that I can never finish?” She’s always had the stronger palate of the household. I had to fess up. I kept drinking it, while she switched to another daily red that we had around the house. Both went just fine with the pasta – which was just this side of utterly awesome, if I were to rate it.

What’s the wine going to be like if you’re actually in the mood for a big honkin’ Italian red? First up, this is an “open at breakfast to drink at dinner” wine. Opening it up, letting it sit open for a couple of hours, then recorking and waiting until the next day might be ideal.

On the nose, there are strong plum and blueberry scents to go along with a bit of pepper. Big tannic explosion on the first sip with more of that plum flavor, some vanilla, and some pretty rich coffee flavors. The finish is heavy with tannin, charcoal, and cocoa. That finish will last you 30-40 seconds, easily.

If you’re into massive, tannic wines – then the Collepiano is certainly an option for you. Like most Sagrantino, this isn’t an inexpensive bottle. It retails for $54. However, if your Father’s Day plan includes a Game of Thrones-style feast of roasted meats and aged cheeses, and you’d like to serve Dear Old Dad something burly, this would make a very nice option.
Posted by The Naked Vine at Tuesday, June 07, 2016