Montepulciano, one of my favorite wine double-entendres.

“Montepulciano” is a wine term that gets tied up in Italian wine naming conventions and can be somewhat confusing. To avoid getting addled, you need to distinguish between the Montepulciano grape and the Montepulciano region. I recently had the chance to try one of each for comparison's sake. 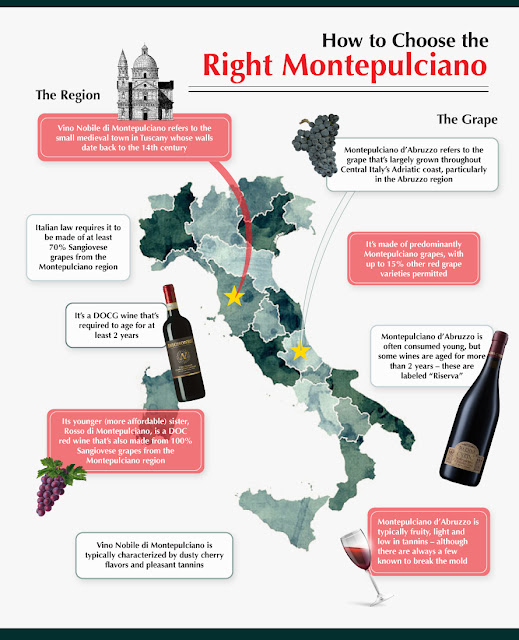 Here at the ranch, Montepulciano d’Abruzzo is one of our house wines. Simple, fruity, medium-bodied and straightforward, a glass of Montepulciano d’Abruzzo is like watching an old episode of Seinfeld. I know exactly what to expect, I can enjoy it without paying too much attention, and I don’t have to search hard to find an episode. The fact that it’s around $10-12 for a 1.5 liter bottle doesn’t hurt, either (or a box for around $18). These wines tend to be relatively inexpensive. I’ve seen bottles of Montepulciano for as little as $5 in my local stores.

There are higher-end versions, such as the Marina Cvetic 2011 Montepulciano d’Abruzzo DOC San Martino. Marina Cvetic married winemaker Gianni Masciarelli in 1987, and Gianni dedicated his top-line wine to her. She has run the Masciarelli production operation since 2008. This more “grown up” version was evident from the moment we poured it. The color was much inkier than what I was used to, and the nose of this 100% Montepulciano is full of plums and strawberries. The body is considerable, with dark fruits wrapped up in vanilla and a solid tannic backbone that becomes very pleasant after the wine gets some air. (I’m not used to decanting my Montepulciano!) The finish is evenly tannic with some nice coffee flavors. With a strip steak topped with mushrooms, just outstanding. Also lovely next to evening chocolate. For $20-25, I thought this certainly worth that price.

Our example from here, the Avignonesi 2013 Vino Nobile di Montepulciano, is somewhat unusual for this type of wine. Going against tradition, the winemaker, Virginie Saverys, made her wine out of 100% Sangiovese rather than doing a blend. Few other wines in Tuscany are single varietal – the best known of which is Brunello di Montalcino.

With the Avignonesi. I prepared chicken thighs braised in an herbed porcini mushroom and tomato sauce, served with a side of gnocchi. Before I plated it up, we tried the wine on its own. I was pleasantly surprised. I don’t generally prefer Italian wine on its own. Something about the minerality just makes my palate crave it with food. This wine, however, had no issues with flying solo.