“You know that in the back of every sushi restaurant there’s a guy going, ‘Hey, look! They ate it! You want some hot wine to go with that, too?” – from “An Evening With Robin Williams”

I remember hearing that line at my friend Dave’s way back in the early days of cable. Dave figured out how to set the tuner on his VCR to get access to free HBO. Comedy specials, Excalibur, and Heavy Metal ensued.

Before I get lost in nostalgia, let’s get back to the late great Mr. Williams and his coke-fueled special, which is still one of the greatest pieces of standup ever committed to film, or tape, or whatever digitally remastered media you want to mention. (And the man’s pants. The pants. See for yourself...)

Anyway, the “hot wine” that he’s referring to is Sake. Sake is one of the native drinks of the nation of Japan. Sake is a fermented beverage made from rice. The process of creating sake is an interesting one – and bears more similarity to the making of beer than wine. Sake, however, is classified as a wine, as it’s typically bottled somewhere in the neighborhood of 10-15% alcohol.

For many years, most Americans only knew inexpensive sake – either served hot with a meal like a tea or dropped as a shot into a pint of beer (the unfortunate “sake bomb”). Sake makers are exporting more and more premium sake into the States, providing another alcohol alternative for thirsty connoisseurs of Asian (and other) cuisines. 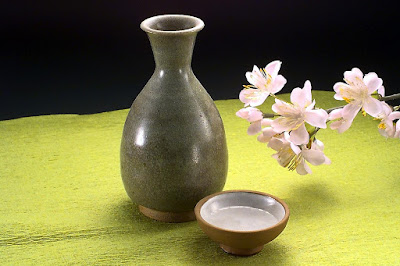 Sake, as we’ve mentioned, comes from rice. Sake rice, known as saka mai, is grown only for beverage production. It’s not really suitable for eating.

The first step of sake production exposes the rice grain through milling or polishing. This was once done by hand (or, more accurately, by foot by stepping on the grains) but is now done mechanically. The rice bran is polished away, leaving the grain behind. The amount of polishing done determines the quality category of the beverage. Cheap “table wine” sake-bomb sake (known as futsuu-shu) may be milled to 80% of original weight, where the ultra-premium junmai-daiginjo is milled to 50%.

Once the rice is milled, the grains are washed to remove residue and soaked to increase the moisture levels in the grain. The rice is then cooked by steaming, with a portion of the total amount held back to create the fermenting starter, which is where the process really gets interesting.

Sake rice (and rice in general) does not have the naturally fermentable starches that grains like wheat and barley do, so the existing starches in the rice grain must be converted. There is a particular type of beneficial mold, called koji-kin, that is sprinkled on a portion of the rice. This mold penetrates the rice kernel. The inoculated rice is called koji. At this point, the koji is added to the rest of the rice, along with more water and a particular brand of yeast. Several batches of koji are added over the course of the fermenting process. The mold converts the starches to sugars, which are consumed by the yeast – at which point alcohol is produced. The product at the end is then pressed, filtered, pasteurized, and allowed to age for 3-12 months before bottling.

If you’re exploring the world of premium sake, you’ll run into two classifications most commonly. Those are junmai (pronounced JOON-mai) and junmai-ginjo (JOON-mai GEEN-joe). “Junmai” means that what you’re drinking is straight sake. Lower grades of sake are often bottled after some neutral alcohol is added. The primary difference is the percentage of “milling.” The more the rice is milled, the higher the quality (and price) in general.

These versions of sake tend to have very light bouquets but fairly upfront flavors, they can be slightly sweet and fruity, and can be slightly acidic. Premium sake (basically anything above the quality of futsuu-shu) should be served at room temperature or slightly chilled. Heating sake, like heating any spirit, basically kills the aromatics. 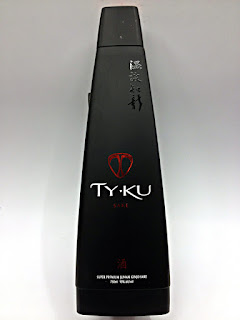 I received a couple of sample bottles of sake from Ty Ku – one of the larger sake houses in Japan – Ty Ku Silver (junmai -- $16) and Ty Ku Black (junmai-ginjo -- $22). I’m not a sake connoisseur – and I honestly haven’t had a glass of sake in quite some time when I tried these. The Silver has a light pear nose, which is mirrored on the palate. Beneath the fruit is an alcohol flavor with a little bit of an alcoholic kick. There’s also a melon flavor that builds a bit. The first taste is a bit jarring. It eases into something a little more pleasant after drinking a bit. As for the Black, the flavor is much more gentle. The flavors are fairly similar, but they’re softer, more even and easier to work with for my palate.

Honestly, neither of them would be drinks that I would ordinarily have a craving for on their own. I tried a little of each with some tuna and salmon sushi rolls. I thought the sake was certainly better with sushi than on its own (especially if there were some wasabi on the rolls).

The other use I’ve seen for sake is as a mixer. It gets subbed in for dry vermouth in some recipes, like sake versions of martinis, gibsons, or cosmos – or for vodka, in something like a “sakedriver” with orange juice. All things being equal, it was certainly a flavor twist, but I personally preferred the classic versions.

Sake’s an interesting twist on your normal aperitif or mixer. If you’re going to give them a try, don’t go for the bargain basement stuff. Drop a little coin on a bottle of junmai-ginjo and decide if these flavors are your thing. If you like it, off to the races. If you don’t, then use the rest of the bottle as you would rice wine vinegar in your favorite Asian recipes. No muss, no fuss.
Posted by The Naked Vine at Tuesday, November 22, 2016