In my “Ten Years” retrospective, I copped to making a number of factual goofs when I was getting this good ol’ column off the ground.

I mentioned my initial confusion about the Spanish wine Rioja. I fell hard for Spanish juice when doing my first pass through the wines of the world. I enjoyed Rioja especially. I was still used to the American naming conventions for wines, so when I saw “Rioja” on the label, I thought that was the grape used in the production of the wine – as I would expect if I saw “Cabernet Sauvignon” or “Zinfandel” on the label.

And I said as much. In public.

As you probably could surmise…that’s just not right. No, to my chagrin, it turned out there aren’t picturesque vineyards of Rioja grapes ripening in the warm sunshine of Spain. Rather, there are picturesque vineyards of Tempranillo grapes ripening in the warm sunshine of Rioja.
Like most European wines, the name on the label – like Bordeaux or Burgundy – refers to the region of the country from whence the grapes spring. In this case, Rioja is a region in the north-central section of Spain, along the River Ebro just southeast of the city of Bilbao. Rioja is just on the other side of the Cantabrian Mountains, which moderates the climates and shields the vineyards from some of the strong Cierzo winds blowing off the coast that can reach hurricane force.

The primary grape used to make Rioja is, as mentioned above, Tempranillo. There is often Garnacha blended in as well to add a little extra fruit flavor to the wine. In general, Rioja is along the lines of Cabernet Sauvignon from a weight perspective, but the flavors run closer to Pinot Noir’s cherry than they do to the dark fruits usually found in Cabernet.

Rioja tend to have fairly firm tannins, both from the grapes used in production and because most, if not all, Rioja are barrel-aged for at least some period of time. The length of aging is one of the primary characteristics of how Rioja is classified. There are four general classifications of Rioja, which are – in ascending order of quality: 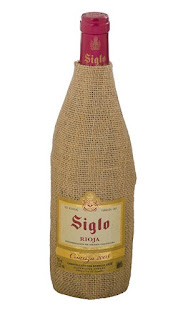 Rioja are super-flexible food wines. The Naked Vine Rule #1 of Food Pairings is “People make wine to go with the foods they love to eat.” Well, those damned Spaniards eat just about everything – from fish to fowl to flesh to flowers. Tapas is just behind fútbol as a national sport. And you know what? Rioja can go with just about anything. I personally love Rioja and paella, even though it’s often got a bunch of fish in that rice. Manchego cheese, almonds, various cured meats – you really can’t go wrong.

(Side note: there are white Rioja as well. I like them, but I’ve never found one that really blew me away. White and Red Rioja are like White and Red Bordeaux. There’s a reason you think of the latter before the former.)

I had the opportunity to try a couple of very decent Rioja recently – one Crianza and one Reserva:


Siglo 2012 Rioja Crianza – This one’s almost worth picking up for the bottle itself, which comes wrapped in burlap. For that reason alone, it would be fun to bring this one to a party. It’s got a bright, fresh nose of cherries and cedar. The cherry flavor passes over to the body, which is relatively light for the fairly solid backbone this wine possesses. The tannins gradually emerge on the finish, leaving a lightly fruited aftertaste. Easy to drink on its own, but really shines with food. It’s flexible enough for all sorts of tapas-y delights. The aforementioned paella was a lovely pairing.

Coto de Imaz 2010 Rioja Reserva – As you might expect, I had an entirely different experience with this Reserva. The nose is fuller and richer, but more restrained. Darker fruits are in evidence – blackberries and raspberries dominate the nose. The body is softer and tongue-coatingly rich with full chocolatey tannins. The finish is long with plummy smoke. I thought this was a fascinatingly complex wine for $20. A real find and certainly worth it.

Spanish wines, in general, are much less expensive than their French and Italian cousins. If you like your Old World wines more on the fruity side, my guess is that you’re going to enjoy a Rioja more than a wine from Bordeaux or Tuscany at a similar price point. Of course, there’s only one way to find out…
Posted by The Naked Vine at Sunday, December 18, 2016