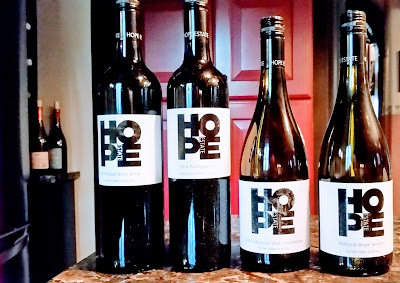 Australian wine played a major role in the early days of my wine education. I was in graduate school, invited to one of my first “grownup” parties. The party was hosted by the boyfriend of one of my classmates, a debonair business sort who hailed from Sydney. He’d bought the local wine store out of Jacob’s Creek and Penfolds, it seemed. I was a beer guy at the time, but was always willing to drink for free learn about new drinks.

After that, Shiraz from Australia became one of my “have a bottle lying around” reds – largely because it was decent, inexpensive, and easy to drink. The Sweet Partner in Crime (who also has an Australian wine history thanks to her stint as a server at Outback back in the day…) and I went through our courtship consuming copious quantities of Rosemount Estates’ Grenache-Shiraz.

But times change and palates change. Most of the Australian wine available in my price range for many years was relatively uninteresting – big jammy reds, semi-sweet Rieslings, and steel tank one-note Chardonnay were always available. A friend of mine in the wine business referred to the inexpensive Australian juice as “Pop-Tart Wine” – because every flavor basically tasted the same. There were some higher quality Australian reds to sample, but many of them were out of our price range at that point. As my wine education took my palate to different areas of the world, Australian wine largely dropped off my radar.

Until recently, that is. My recent dispatches about the wine shortages brought about by climate change in North America and Europe prompted me to start looking below the equator for better wine values. Fortuitously, the wine fairy dropped off a package of wines from Hope Estates in Australia’s Hunter Valley, in New South Wales near Sydney.

Hope Estate, founded by Michael Hope in 1992, started as a single vineyard, but has expanded to an entertainment complex which includes a brewery, a café, and a 20,000 seat amphitheater – if you’re ever in the neighborhood. A four pack of Hope Estates wines got me rethinking the lack of Australian wine in my portfolio, as they were all quite good and sit at a nice price point:

Hope Estates 2016 Wollombi Block Semillon – I don’t know when the last time was that I tried a straight Australian Semillon. Must be a decade, at least. Semillion’s a native grape of France, where it’s usually blended into white Bordeaux or noble rotted to make Sauternes, the most expensive (and for good reason) dessert wine in the world. In Australia, though, Semillon is grown as a primary white varietal. If this wine’s any indication, I’ll need to work this into the rotation somewhere. This version’s a crisp, minerally white full of lemons and limes. Lots of minerals on the palate, which has a nice weight and a little honeyed sweetness. Most wines this acidic feel much lighter. Pretty floral nose, too. $14.

Hope Estates 2015 Hunter Valley Chardonnay – As I mentioned, for me, Australian Chardonnay always seemed uncomplicated and forgettable. Some winemakers seem to have taken up the challenge of improving these wines. This estate grown Chardonnay is aged in French oak with extended time on the lees to add to the mouthfeel. It has a very fruity nose -- bananas and pears, which leads to a full flavored body with a nice creaminess. The flavor yields plenty of pears and peaches, transitioning to a well-balanced oakiness. The finish is lasting, fairly crisp, and with a nice little smokiness. A nicely put together wine. Good value at $14.

Hope Estates 2014 “The Ripper” Shiraz – The first of two Shiraz bottlings in this set. Don’t be frightened by the name of this wine – “Ripper” is an Australian slang term for “Great.” Honestly, I feel like that’s a pretty solid interpretation of this particular bottle. Full of Oz-Shiraz red fruit-forwardness on the nose and palate, the Ripper pulls back into a nicely balanced middle of spice, licorice, plums, and leather. Not the fruit bomb you might expect from an Australian Shiraz, the finish on this is long and fruity, but with a solid tannic backbone. A particularly strong value at $18.

Hope Estates 2014 Basalt Block Shiraz – The “Basalt Block” is a parcel of land in the Broken Back mountain range with deep, volcanic soil, which lends an earthy characteristic to this wine not found in the Ripper. This one has a lovely nose of coffee and plums that transitions into a deeper, smokier fruit on the palate. Blackberry, graphite, and smoke entwine on a firm tannic base. The finish tickles on for quite a good length of time, with smoke and dark fruit alternating. Fans of Rhone Valley-style blends will really enjoy this wine. Again, $14.
Posted by The Naked Vine at Sunday, November 26, 2017