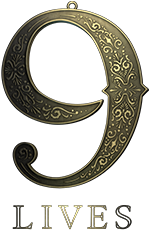 Anyone who’s spent time around this little shabeen of mine knows that the Sweet Partner in Crime and I love our pups. One of the real stress points for us in our recent move to State College was worrying how our critters would adjust to living in The Pennsylvania.

We had some tense moments when we got here. Even though we have a fenced-in backyard at our new place, our dear girl Rosie is every bit the beagle – and she exploited every opening she could find. She escaped four times in the first two weeks, but managed to find her way home each time – although once, apparently, she made a visit to an open sewer first. She’s gotten much better. The Charles Dog has had no such inclinations. He just wants to snuggle.

So, when across the wires came the opportunity to try a couple of Chilean wines tagged with the moniker “9 Lives,” I hoped that my natural bias towards canines wouldn’t mess with my ability to be objective about what we were going to be tasting. I did my best.

The 9 Lives wine line comes from Viña San Pedro, a Chilean producer. As you know, I’ve long espoused losing the notion that most South American wine is cheap plonk. While there are some hastily made, one-note wines from below the Equator, there are also many affordable, well-made wines that regularly make their way north. I think these two offerings – a Sauvignon Blanc and a Cabernet Sauvignon certainly fall into that category.

The wine’s name stems from a black cat that would appear in the winery vineyard. The first winemaker at the place put a charm with the number nine around the cat’s neck – and the cat has never left.

Both these wines hail from Chile’s “Central Valley” – but, truth be told, that’s like saying that a domestic wine is “from California.” The Central Valley wine region is one of the largest in South America – with so many subregions and microclimates that just seeing “Central Valley” won’t tell you much about the wine style. These wines are also labeled “Reserve,” but that doesn’t have a particular meaning.

I can tell you, however, that they’re both quite decent. Each retails for right around ten bucks, so you’d be getting a pretty solid value, in my estimation.

Viña San Pedro 2018 “9 Lives” Sauvignon Blanc – Very light and refreshing. The tropical fruit flavors of Sauvignon Blanc certainly are in evidence, although the body feels much more like a well-made pinot grigio or a stainless-tanked Chardonnay. I thought it was nicely aromatic, with plenty of lemon and orange blossom on the nose. The body is crisp and dry, with lemon and pineapple flavors edging over a nice minerality which simply doesn’t exist in many contemporary SauvBlancs. The finish is crisp – reminiscent of the grapefruity finish on a vinho verde. Also really improves with a little bit of air. For warm weather, a real winner at the price.

Viña San Pedro 2017 “9 Lives” Cabernet Sauvignon – When I did my informal study on wine perception many moons ago, I made the observation that the more expensive someone thinks a wine is, the better they’ll usually think it tastes. Here, I’m trying a Cabernet that’s under $10 – so I had very moderate expectations. The wine blew right past those. Whatever magic that cat brought to the vineyard, it’s reflected in a very solid Cab. There are actual vanilla and tobacco aromas on the nose to go with the common red berries, and the flavors are really nicely balanced between dark red fruit, leather, and a very nice smoky tannin. The finish is the only place where things trail off a bit – it’s a bit soft on the end and the tannins don’t linger, but for ten bucks, I mean – whaddya want? If you’ve got grilled meat or big cheeses, set it and forget it.

I can appreciate cats, you know. In my days hanging with the Wizard of Covington, I had to overcome my allergies and was able to get along with critters of the feline persuasion. But nothing will replace the unconditional love of my pups – who are finally making the adjustment to this place, as you can see…