The Alphabet Soup Project – “D” is for “Decant”

How many times have you heard or read something to this effect in a wine description:

“Make sure you open the bottle and let it breathe for an hour or so before you drink it.”

Astute Vine readers probably remember that very recommendation from me in this space.

Guess what? Anyone who tells you something like this (including myself, admittedly) is more or less full of it as it applies to most bottles. Honestly, if you crack a bottle and let it sit for awhile, any difference in flavor – at least initially – is going to be largely psychosomatic…like most tasting notes. When someone tells you that a wine has a “strawberry nose,” you’ll unconsciously sniff for strawberries.

Decanting wine is all about physics. Think about why we swirl wine – since alcohol evaporates on contact with air, bringing those wonderful aromatics to our nose so we get flavor. The more surface area gets exposed to air, the more aromatic a wine will become. Some wines also develop a sulfury smell or a sweatsock stink after being in bottle for awhile. Exposing the wine to air allows some of those scents to dissipate a bit. Simply opening a bottle and letting it stand only allows a tiny bit of the wine’s surface to contact the air. Using a decanter provides much more oxygen exposure, which causes the wine to “open” more quickly and effectively.

So, what is a decanter? In a nutshell, it’s simply any container into which you can carefully pour (usually) an entire bottle to expose more of the wine’s surface area to oxygen. Decanters come in all shapes, sizes, and styles, ranging from very simple to curvy, twisty shapes that make for better art than function. I mean, if you’re feeling vampiric… 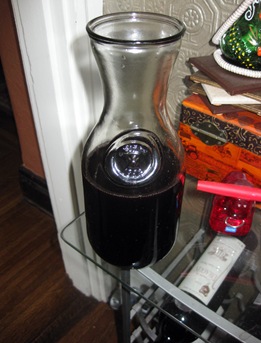 I can’t remember where we came up with this, honestly. I think it may have been a bottle of white zinfandel once upon a time that I bought for sangria, and we’ve used it as a flower vase ever since. It’s a perfect size – comfortably fits an entire bottle, easy to pour from, and I don’t have to worry about being clumsy with crystal. You can also use a water pitcher. Works fine. In a real pinch, just pour the glasses early and put them somewhere that they won’t be disturbed.

How to decant wine? Easy. Open the bottle, then pour the contents into the decanter slowly and reasonably gently. I use the pouring method long-perfected by any knowledgeable sophomore at a keg party – tilt the decanter and pour down the side. While you don’t have to worry about your wine foaming up everywhere, cabernet sauvignon stains don’t come out as easily as Natty Light. After you’ve poured your wine, just set the decanter down somewhere for 20 minutes or so (longer for certain wines) – and go to town. Now, if you want to show off the bottle itself, you can pour the wine into a decanter, let it sit, and then pour it back into the bottle. Use a funnel! (Another side benefit of decanting -- it’s an opportunity to get any sediment out of your wine – especially unfiltered wine. Wine sediment usually doesn’t have any effect on the taste, but “gritty” isn’t a sensation I want when I’m quaffing.)

During the afternoon & evening of the Sweet Partner in Crime’s recent birthday, we did a little experiment with a few bottles. We opened each bottle and tasted it immediately. Then we decanted, let the wine sit for a bit, then sampled it again. We used the following bottles:

First up, the white Burgundy. I don’t usually decant white wines since they’re made to be drunk young. As a rule, the younger a wine’s made to drink, the less good you’re going to do by decanting. Most of these wines, however, are built to last and we thought it would be interesting to see the contrast. At first taste, the “typical” white Burgundy profile came out – fairly crisp and minerally in a lean style with plenty of citrus. After decanting, new flavors emerged. Peach and pear popped up, as did a mild oakiness that really pointed up the lemony flavors. Made a good wine that much better. I decided to do a “day of small plates” and started off with some smoked salmon and crackers. The oakiness worked well with the smoked flavors and the acidity cut through the oils nicely.

I picked up the Saintsbury on a “vintage clearout” sale – it’s typically around $35. This vintage was getting towards the end of its “recommended peak,” and it was pretty straightahead pinot at first taste. I certainly got the “smoked cherry” flavors you’ll get from most pinot, but it didn’t seem overly complex. When you have a wine that’s getting near the end of its peak, decanting will allow you to wring all of the flavor you can from the wine. With the Saintsbury, after a little decantation, revelation. The nose picked up a caramel twist and the body added some yummy ginger and raspberry flavors. The smokiness was enhanced at the end. This went from a solid, everyday pinot to something more supple and sexy. I made a little “seared sashimi” with it. I read it was a good pairing, and I can stand and tell you to three decimal points that it’s heavenly.

Finally, the Barolo. Now, Barolo is a special case. These powerful Italian wines from the Piedmont are so tannic on bottling that they usually need a minimum of 8-10 years in bottle before the bitter edge has softened enough to drink. Tannic wines almost always improve with decanting. (The same applies to young California cabernets and the like.) This Barolo was a great deal from Garagiste Wines – even so, it was still around $45. When first opened, the light color of this wine belied the power within. At first sip, though, it was tannic but not overly so and fairly easy drinking. I might have even confused it with a Chianti. The recommended decant time for Barolo is at least a couple of hours, so I set it aside and got to work on my special birthday eggplant parmesan. When I served it up and poured the wine – a transformation. The wine “woke up.” That’s about as well as I can explain it. Everything was more powerful. The tannins were stronger, the plummy, somewhat tarry flavors were pronounced, and the wonderful complexity showed up. It went delightfully with the parmesan. Actually, the post-decanting version was too strong in the opinion of the SPinC. She said that she liked it better before decanting, actually. As I’ve said, everyone’s palate is different.

So, when should you decant? Almost anytime you can, really. Unless a wine is a bargain-line wine, you’re probably going to see a marked improvement in flavor and complexity after you decant a wine for a bit. In a pinch, you can use an aerator. These work well for most wines – but for something that needs more time in air (older European wines or younger American wines in general), you’re still going to be better off finding something to pour the wine into for awhile.

Can you please tell me where I can purchase the decanter that looks like a heart from? My email is info@topaustralianwines.com.au. Thanking-you,
Martin Peston