Another mouthwatering entry from Jeff, halfway through his gift to Christine the Pie Queen…

The wine this month was a very nice Beaujolais paired with a recipe suggested by Mike at TNV. I put together a small cheese plate for an appetizer and a very simple, fruity dessert perfect for the warmer months. You may remember that last month we had Thai grilled chicken. This month we are sticking with the Asian theme. Enjoy.

I started by making the mango puree for the dessert and putting it in the refrigerator to chill. I then opened the wine and had a brief panic when the cork broke in half while still in the bottle. I figured that couldn’t be a good sign, but I was able to get the rest of the cork out and found finding the bottom of it wet and the wine just fine. The wine had good fruit with a nice soft finish and not a lot of tannin. It went great with the appetizer and the main course.

Next, I got to work on the cheese plate. I set out some grapes, sliced pears, and bread as well as three different cheeses that I picked up at our local Kroger: brie, boucheron, and morbier. They were in that order as far as pungency. The brie was creamy and smooth while the boucheron, a goat’s milk cheese, was a little more pungent but very tasty. The morbier was even more pungent – so much so that we couldn’t even eat it. I told Christine it smelled like feet. She said she didn’t mind that because she loves stinky cheese. But after smelling it, she described it as something dead and rotting in the ocean. I think we finally agreed that it smelled like feet, if you wrapped the feet in a dead jellyfish and let it sit in the sun on the beach for a week. In retrospect, perhaps we got a bad block of cheese, so we just stuck with the two other cheeses and the fruit and it all went very well with the wine. 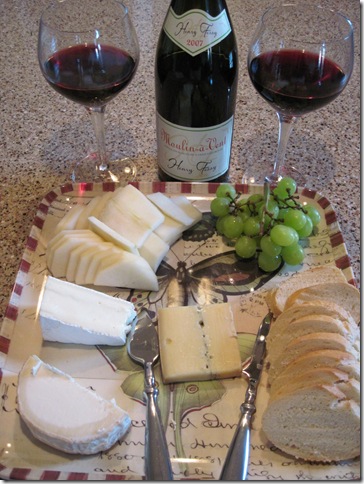 After the appetizer, I started preparing the main course and side dish. I prepared the beef for the grill and, at Christine’s suggestion, put some sliced zucchini in a foil packet with some olive oil, graded ginger and garlic. I also threw in some seasoning – Trade Joe’s 21 Seasoning Salute to be exact – which added a nice zing. I wasn’t going to make the zucchini, but we had it to use and Christine is always pushing the healthy stuff on me. I put the beef and zucchini on the grill and prepared the rest of the salad ingredients, including some shredded mint from our backyard. After six minutes I turned the beef, let it cook for another six minutes, and then took it and the zucchini off the grill. I sliced the beef and added it to the other ingredients in the salad. I plated it up and we sat down to dinner. The wine went very well with the myriad of flavors in the salad and we finished the bottle. (Note from Christine: This was one of my most favorite meals so far – try it!) 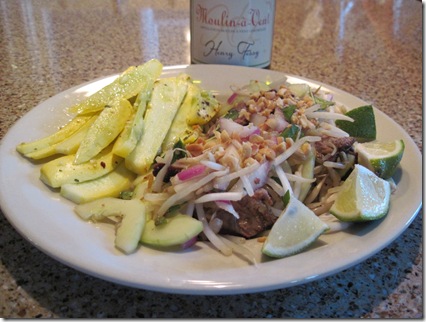 After the main course, we took a little break and Christine relaxed by the pond while I cleaned up and prepared the dessert. I put some of the pureed mango in stemmed glasses and added watermelon balls with a sprig of mint for garnish. The dessert was cool, light and refreshing - a perfect ending to another great meal. 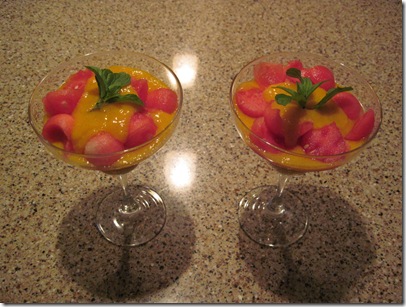 Here’s a quick preview of next month. I’ll be doing barbecued pork ribs to go with a zinfandel, and I might just have a recipe from a special guest contributor to this guest contributor. Check in and see how it turns out.