If you live in the Cincinnati area, as we do, one of the great culinary treasures is Findlay Market, a municipal market first opened in 1855. I don’t really consider myself a foodie, but walking in the market and seeing the goods on display at the various vendors’ booths almost always inspires me to try something different. With apologies to our vegan and vegetarian friends, some of my favorite places are the meat vendors. Often I have looked at a sumptuous rack of baby back ribs and thought, “I’d like to throw that on the grill sometime!” So this month I get my chance. I picked up the ribs at Mackie Quality Meats and a mesquite dry rub from the spice vendor Herbs & Spice and Everything Nice and got to work on July’s wine dinner.

In this case the ribs were actually the easy part. My brother-in-law, Rob, told me his method which was super easy and made for incredibly juicy, tender and succulent ribs.

[SPOILER ALERT: In order to help Rob maintain his Lone Star street cred, those of you from Texas please stop reading now and join back in below.]

When I pictured myself cooking these ribs it was standing at the grill, patiently watching over my prize as it cooked over low heat and absorbed the smoke from some wood chips I threw into the grill. You know, like a real man. But Rob gave me a better way – cooked in the oven. Start by putting on your Tommy Bahama-like shirt and pre-heating the oven to 225 degrees Fahrenheit. Coat the ribs in the dry rub and wrap in aluminum foil, sealing it tightly. Put the ribs on a baking sheet (juices will leak) and put in the oven for just a little less than 5 hours. I went with 4 hours and 45 minutes. You don’t even have to watch them, which gives you plenty of time to make side dishes. Once the ribs were done in the oven, I took them out and finished them on the grill a few minutes while brushing on some barbecue sauce. You could also do this in the oven under the broiler, which would probably have been easier since they were so tender that the rib rack started falling apart when I tried to turn it over on the grill.

[You Texans can rejoin the conversation now. I think Rob’s reputation is intact.] 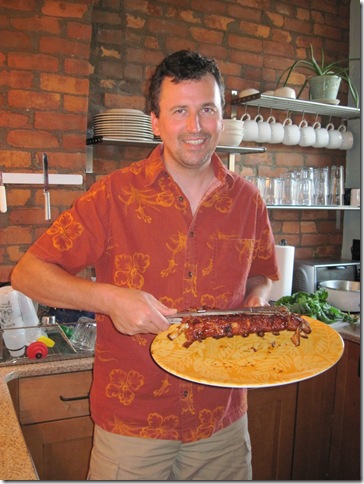 And there you have it. You often hear the phrase “fall off the bone tender”, and these ribs really were! We could not even pick them up by the bone to eat because the meat would just fall away, and they were so juicy you could almost drink them.

While the ribs were cooking, I made the side dishes. The slaw can be made early on, and the recipe even suggests making it the night before so the cabbage and other vegetables can marinate in the dressing overnight. It was just slightly sweet with a good vinegary tang. I chopped the cabbage pretty thick so it was crunchy and hearty.

The green bean salad was sort of an olio of things we had around the house. The beans were from my parents’ garden last year. We had helped them pick, wash and break the bean, and Christine helped my mom can them. As my Dad said, “She got the full bean experience.” I added some small, boiled potatoes that we also picked up at Findlay, some corn we had leftover in the fridge and some chopped onion. I mixed into this some pesto that Christine had made from the basil in our garden and warmed the whole thing up. Just prior to serving, I cut up some tomato wedges and placed them on top. I had opened up the wine to let it breathe a little and after plating the meal, I poured us a couple glasses and we sat down to eat. 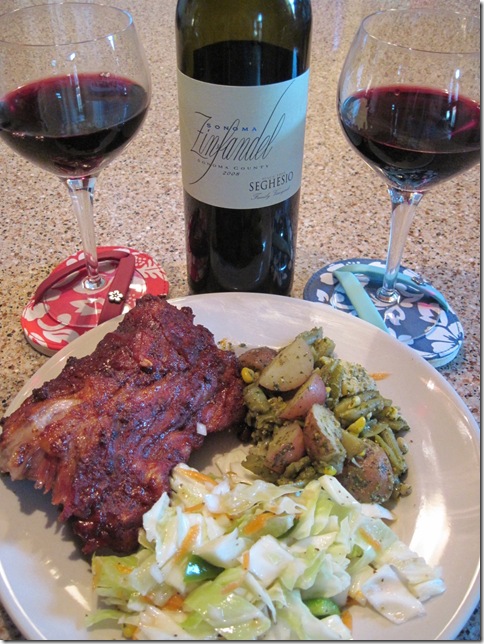 As I said before, the ribs were tender and juicy, and the barbecue sauce gave them a nice smoky flavor with just enough sweetness. The acidic tang of the coleslaw provided a perfect counterpoint to these flavors, and the bean salad provided additional flavor variety. The wine went nicely with the entire meal as it complemented the ribs and was not overpowered by them. It was a nice counterbalance to the tartness and acidity of the coleslaw. Needless to say, between the two of us we finished off the entire rack of ribs and the bottle of wine.

Christine relaxed for a bit while I cleaned up the kitchen and then we went for dessert. I had not planned a dessert because I figured what would be a better after a meal of barbecued ribs than ice cream, and in this part of the country, there is only one ice cream – Graeter’s. A couple years ago a Graeter’s store opened up about eight blocks from us. This is a good thing because now we walk over for a scoop instead of buying a pint and gorging ourselves with the whole thing. Self-control and Graeter’s are not two words that play well together. Christine had a scoop of her favorite, coconut chip, and I had a scoop of mint chocolate chip. We walked home completely satisfied. It was another great meal with another great wine. 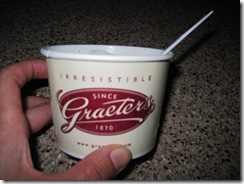 mmmm... ribs and Graeters!!! And I am a personal fan of making ribs in the oven instead of the grill while still considering myself a Texan. :-)

coconut chip is my fav too! I want to fix some ribs now, but I'll settle for a nice glass of red wine.

that last comment was me. User error made it show up as anonymous.

some guy in austin said...

I've been 'smoking' my ribs in the oven for 3 years now. Easy and delicious.