Wine and Dinner of the Month Club – August 2010

This month’s entry includes the meal and wine description, but also a surprise visit that I describe at the end, so make sure you read all the way through. Is this just a cheap trick to get you to read the whole article? Sure, but I’m not above a little gimmickry for the benefit of the greater good.

Originally I was going to go with either pork or duck based on a recommendation from Mike’s (of The Naked Vine) Sweet Partner in Crime, Pam. Unfortunately, earlier in the month I had some gum surgery that precluded me eating certain meats. The tuna steaks were a good alternative.

I prepared the steaks by coating them with olive oil and rubbing on some grated lemon peel and spices per the recipe. These I put in the refrigerator and then made the simple salsa which included peaches, onion, cilantro, lemon juice, salt and pepper, and also put this in the fridge.

To make the bruschetta I sliced a baked French batard and brushed both sides of each slice with olive oil and garlic. I toasted these in the toaster oven and then loaded them up with diced tomatoes and basil from our garden, a little drizzle of olive oil on top, and a dash of salt and pepper. I had already opened and poured the wine so Christine and I sat on the back patio by the pond enjoying the appetizers and the wine, which was immensely drinkable and food friendly. Mike told us this was the case and he couldn’t have been more right. 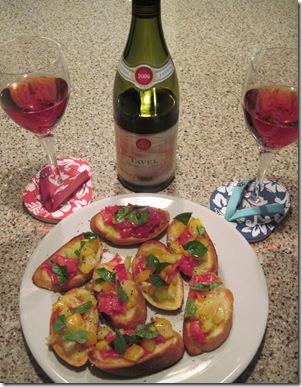 While Christine relaxed with a fresh glass of wine, I prepared the tuna. Tuna steaks are usually cooked rare so it doesn’t take very long to prepare them. I threw them on the grill for two and a half minutes for my steak and three minutes for Christine’s steak because she prefers them more thoroughly cooked. Once I took them off the grill I plated them up with the peach salsa on top. I completed the meal with a simple green salad and some cherry tomatoes from our garden. 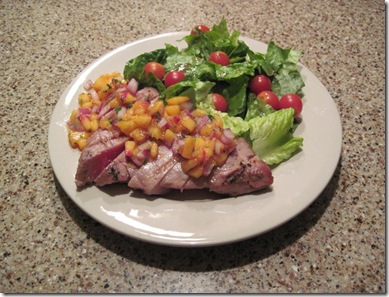 The steaks were good, but both Christine and I thought the salsa make the meal. The sweet and sour aspects of the salsa really complemented the fish. The wine lived up to its billing and went nicely with the steaks. The wine had good texture but did not overpower the fish. Christine commented that it wasn’t very tannic and was very easy drinking. I highly recommend giving this wine a try.

After dinner we sat around the table and finished off the bottle of wine. We were pretty sure it wouldn’t go with dessert since dessert was watermelon that had been soaking in vodka all day. This dessert was super simple to make. I cut up watermelon into bite size pieces and put it in a shallow serving dish. I then poured in a mixture of lime juice, sugar, mint (from our garden again), and plain vodka. I poured in enough of the mixture to just cover the watermelon, put a lid on the dish and set it in the refrigerator the morning of the meal. To serve I simply spooned pieces of watermelon into bowls and poured a little of the remaining liquid over them. 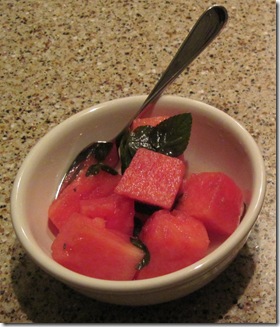 You could certainly taste the vodka in the watermelon, but it wasn’t overwhelming and at the end you had a little watermelon flavored vodka shot at the bottom of your bowl. I think it might be interesting to try this with flavored vodka just to see what combinations you could come up with.

I alluded to a surprise visit earlier. Well, it wasn’t that we had a visitor, it was who we visited. I don’t know if it was the wine, or the vodka or both, but it was a pleasant evening and Christine felt confident that Mike of the TNV and Pam his Sweet Partner in Crime, who happen to be our back alley neighbors, would be sitting out on their back patio so she decided to go over and offer to deliver some of the vodka watermelon. Good friends that they are, they indulged us and Mike even gave us a sneak peek at their newly refinished basement with full on man cave and wine storage under the staircase for about 150 bottles of wine. That’s a lot of wine, but is there ever really enough storage for good wine?

As is usually the case when the four of us get together another bottle of wine was cracked open. Mike picked out a lovely dessert wine from Adelaide by d’Arenberg called The Noble. It is a blend of Chardonnay and Semillon grapes that have been infected with botrytis mold which results in high sugar content in the juice and high residual sugar in the wine. [Ed.note – a very tasty faux Sauternes!] Between the four of us we finished off the bottle, but it was only a 375 ml bottle and the alcohol content of the wine was only 9% so we didn’t really feel any ill effects as we toasted the renovated basement. 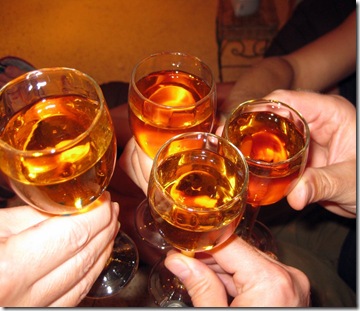 It was another great wine meal with the added benefit of ending it in the company of good friends. We loved Mike and Pam’s refinished basement. If you get a chance to visit it in person, you might find yourself with an inexplicable hankering for a burrito and some chips and guacamole. Just ask Mike to pick a nice wine from the cellar to go with it.