This month’s entry heads to South America for both the main course and the wine. Only one recipe was found online, so I will try to reference the other sources and describe how they are made.

The wine this month is from Argentina and for a food pairing Mike at TNV suggested the following – MEAT! MEAT! MEAT! As an alternative he also suggested MEAT! But if you’re vegetarian you could go with lamb (see My Big Fat Greek Wedding, 2002). I was trying to find a good recipe and found one in How to Grill: The Complete Illustrated Book of Barbecue Techniques

by Steven Raichlen (© 2001 by Steven Raichlen). The grilling was pretty straightforward, but the preparation was a little involved. You start with center cut beef tenderloins, slice them thin and then pound them to a quarter inch thickness between pieces of plastic wrap. This process tenderizes the meat and also is a great way to work out any frustrations from your day at the office. You then marinate the meat in a three herb chimichurri made up of parsley, cilantro, mint, garlic, olive oil, white vinegar, salt and pepper, and water. The recipe for the marinade is also in the book How to Grill.

Place the meat in the chimichurri and let it sit in the refrigerator for about an hour. Reserve some marinade for serving later.

I next started the potatoes. I cut these into French fry size pieces, coated them in olive oil and herbs (rosemary, sage, marjoram or whatever else you want to use) and put them on a baking sheet. Cook these at 475 degrees for about 20 minutes, turning them a couple times to cook evenly. Watch these closely so they don’t dry out.

While the potatoes cooked I make the appetizer, fried green tomatoes. These are really simple. I took green (unripe) tomatoes from our garden and cut them into slices. I coated them in cornmeal and fried them in olive oil until golden brown on both sides, seasoning with salt and pepper while cooking. I served these with a homemade aioli, which I made by mixing some olive oil, salt and pepper, and lots of garlic with some mayonnaise. Simple and delicious! 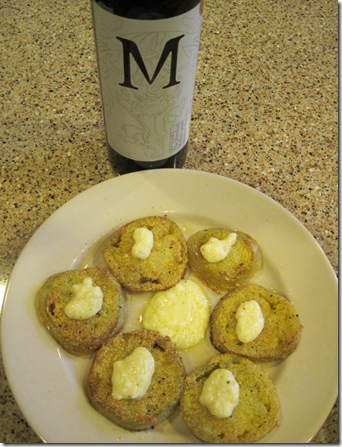 While the potatoes were finishing cooking I grilled the meat. On a hot grill cook the meat about four minutes on each side, depending on how rare you like it. I did ours about medium. I plated it with the potatoes and a green salad with ripe homegrown tomatoes. We had some of the meat left over, which made for great steak salads the following night. 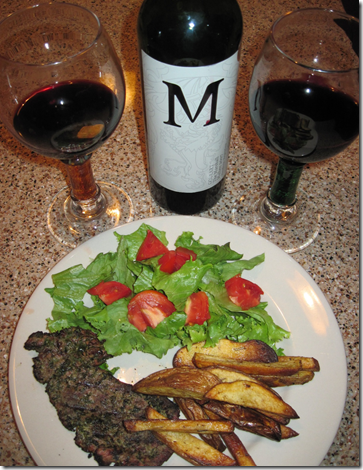 I had made the dessert before and it is always a hit. The recipe is for 12 servings but you can always cut it down to whatever number of servings you want. Usually you would top this with ice cream but we used whipped cream. Mmm, mmm, good! 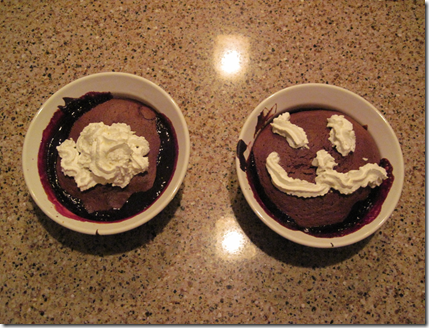 As for the wine I can honestly say, wow! It had very luscious berry and cherry flavors and I think when I poured it I thought I got just the slightest whiff of tobacco. The color was a deep ruby red. This was definitely a food wine, as I don’t think I could sit around drinking this by itself. It went great with all the courses of the meal, nicely offsetting the garlic in the aioli with the fried green tomatoes, complementing the steaks and herb chimichurri, and, because of the berry/cherry flavors in the wine, it also went surprisingly well with the dark, sweet cherry and chocolate flavors in the cobbler. I would definitely buy this wine again, especially to go with steaks off the grill. Thanks to Mike for another great recommendation.