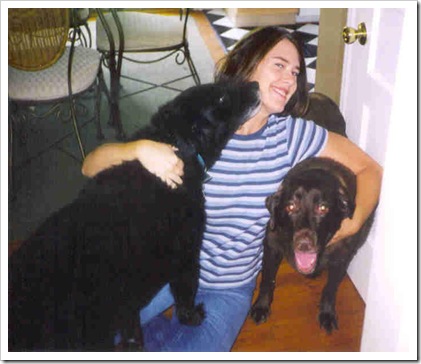 The Sweet Partner in Crime and I had been dating for a few weeks when she invited me to swing by her place for some food and a glass or three of wine. My family had had dogs while I was growing up, although my sister was much more interested in them. I like pooches, though, and since I had some obvious ulterior motives, I answered in the affirmative. She continued:

Yeah, yeah – so what? Big dogs? I can handle big dogs. I came to the front door, knocked, and heard them bark. The Sweet Partner opened the door and my life changed forever. Before I could take a step, I was nearly bowled over by 70 pounds of fast moving black fur. Paws to chest, face to face, and major greeting kisses. A relationship was born. The SPinC eventually warmed up to me, too…

(Side note: I was also bowled over by Jessie Red, who had no less of an impact…)

The SPinC got Mooch from the county animal shelter when he was a few months old. He’d been turned in twice, so finding my sweetie probably saved Mooch from an early dirt nap. He was a handful -- willful, listened when he felt like it, and always on the prowl for some kind of mischief. (As the SPinC said recently, “A quarter of the words I said to him were “NO, MOOCH!”) He was an unrepentantly bad boy who had a sense of duty and honor that would draw salutes from many Marines. He saw his life’s purpose in perimeter patrol wherever he found himself, protecting all in his sight from the hellborn threat of cats and squirrels.

Mooch didn’t look like any other dog I’d seen. He was a strikingly handsome mutt – the neighborhood bitches couldn’t get enough of him. Some posited that he might have had some golden retriever blood, but we didn’t buy that. Retrieving wasn’t his thing. But if a cat found its way into the yard? Mayhem. Mooch knew trigonometry. When he chased a cat, he’d run them towards the highest fence in the backyard. The critter would invariably try to jump the fence and end up sliding back down. Mooch was ready. When the cat hit the fence, rather than follow, he immediately calculated the precise end of the cat’s unfortunate parabola – and he’d run straight to that spot and wait, mouth open. We figured him for a German shepherd/Australian shepherd mix. Where the jet black came from? Anybody’s guess.

He earned his name with his somewhat unconventional yen for people food. Our kitchen needed constant Moochproofing. We like good food, and Mooch developed a refined palate. Mooch would turn his nose up at table scraps. He wouldn’t eat fat cut trimmed from any kind of beef or pork. Ham held little interest for him. But bring seafood anywhere within a block of the homestead, Mooch goes nuts. Salmon skin was his closest touch of heaven. We could never get him to stop playing our heartstrings for fish. (And it occasionally worked.)

Anything on the counter was fair game. I diced some tofu for a stir fry, left the room for a second, and came back to the sight of Mooch, both paws on the counter, face down, going to town on a pile of soy protein. I also have clear memories of watching Mooch effortlessly snag a roast beef sandwich from the unsuspecting hand of my father (an easy target for such subterfuge).

The Sweet Partner and I usually end our day with some two-bite brownies and some good red wine. We really enjoy them – you know who else does? Mooch. We made the mistake of leaving some of these brownies on top of the sofa. This was in Mooch’s older days when he wasn’t getting around very well. He’d not climbed any of the furniture in several years. This time, though, we came back to an empty brownie container and an old dog with a new craving after he answered the brownies’ siren song.

I always joked with the SPinC that her adoption of Mooch paved the way for my entry into the family. When you get right down to it, Mooch and I were a lot alike. We’re both somewhat obnoxiously alpha, a bit twitchy, always keeping eyes out for a million things, and with attention spans that a fish can put to shame. We also try to make sure everyone’s safe, show a great deal of passion, love fiercely, and will do just about anything for a good scritch. Mooch was the first dog that I ever really understood. He was the one who made me really understand what a “dog person” was. I think we ended up training each other.

We put Mooch to rest a few weeks ago. His first, well-deserved break after fifteen years of constantly protecting the family. We buried his ashes in the patch of hostas where he used to love to flop while we were on our patio. (We’d also been keeping his big sister’s ashes, but we decided to put the two of them together. They’d always been inseparable.)

Mooch was the Sweet Boy and the Smoocher -- the eternally mobile speed bump in the kitchen. He greeted us every morning with bright eyes and furiously wagging, blackflowing tail that looked like it could have been on one of the squirrels he kept away. He always appreciated the chance the Sweet Partner gave him to show that he’d be a good part of a family. Just as I appreciated being a part of Mooch’s life. He taught me so much.

I was lucky enough to be scratching him behind the ears when he passed from our world.

Goodnight, sweet prince. And flights of angels sing thee to thy rest.

Bad Dog Ranch 2005 Petit Sirah – A pretty easy call to look at this wine. Big nose of prune and cedar. Lots of dark fruit on the palate, but the flavor slides away a little quickly. Interestingly, the fruit returns on the finish along with some very solid but well-balanced tannins. A solid value petit sirah.

Boekenhoutskloof 2009 “The Wolftrap” Red Blend – Who knows? Maybe Mooch was part wolf? This red blend is from South Africa. Made up of syrah and mourvedre, with a little viognier thrown in for good measure. It has an unexpectedly vanillaish nose and was quite tart initially. Although it was lighter bodied and more acidic than I expected, this wine went exceptionally well with the aforementioned two-bite brownies.

Magnificent Wine 2008 “Fish House” Columbia Valley Sauvignon Blanc. We raised a glass of this to him over a pot of shrimp, mussel, & asparagus risotto. The wine went perfectly with the meal, but we would have had a difficult time eating this if Mooch had been around. He’d have been at the table, smiling broadly, asking for a bowl of his own.

and will do just about anything for a good scritch. I'll let Gremalkin know when you come to visit.

Lovely tribute to a one of a kind furry guy.