Fresh off our trip to Thailand in February, I was having a hankering for meat on a stick, so some skewered chicken and some kind of stir fry seemed to fit the bill. As an added bonus, I whipped up a quick peach crisp for dessert. All the recipes for this month came from The America’s Test Kitchen Family Cookbook Third Edition (© 2010 by The Editors at America’s Test Kitchen).

I started out making the chicken marinade and the peanut dipping sauce. These can be made ahead of time and kept in the refrigerator, but I had plenty of time to make them on the day of the dinner. It’s really just a matter of mixing ingredients, but make sure you store the chicken and marinade separately until you are ready to make the meal. After prepping for the sate, I made the peach crisp and put that in the oven. While the crisp was baking I prepped the ingredients for the stir-fry and then skewered the chicken and placed them on a broiling rack.

Once the crisp came out of the oven, I finished my prep on the stir fry and then popped the chicken under the broiler. There isn’t a set time for cooking the chicken, as you just want to make sure that you cook it all the way through. The recipe said four minutes for each side, but a couple of mine were a little thick so it was actually more like six minutes for each side. They came out plenty juicy and tasty and the peanut sauce was a delicious complement, though not as spicy as I had anticipated. 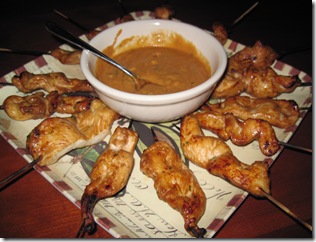 The stir fry was quick to prepare once I had all the ingredients ready, so I didn’t start cooking it until after we had the appetizer. I will admit to one peeve I have about cookbooks and their prep time estimates: cookbooks generally don’t take into consideration all the prep work when coming up with the time estimates. For example, the stir fry recipe called for snow peas, with strings removed, but you have to remove the strings first, which isn’t taken into account in estimating the prep time. So keep that in mind when trying to time the meal.

The stir fry was tasty with a good sauce that did not overwhelm the vegetables. This was mostly a vegetable stir fry, but I think it also would have been good over rice, particularly with the sauce soaking into the rice. 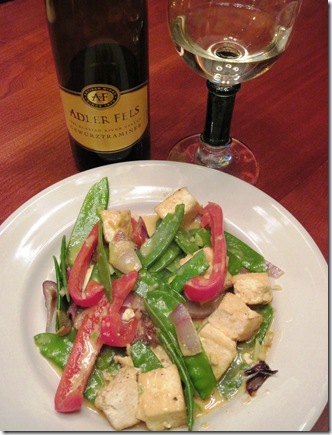 After dinner I whipped up some whipped cream, which we had on top of the peach crisp. The peaches were lovingly peeled, sliced and frozen from last summer’s peach crop from McGlasson Farms. 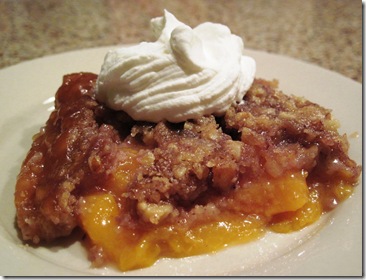 As for the wine, it was wonderful, with some nice citrus and melon notes and maybe a hint of baby’s breath in the nose. There was a little sweetness to it, but not much and it went very well with both the chicken sate and the stir fry. We tried it with the peach crisp, but both Christine and I thought it didn’t have enough sweetness to pair well. We tried a Riesling that we had open in the refrigerator and that seemed like a better match.