Special guests joined us for the wine dinner this April. My sister Mary and her husband Bill were in town from Tampa, Florida to participate in the Cincinnati Flying Pig Marathon. Mary was going to run the half marathon and Bill was slated to run the full marathon (which, if you didn’t know, is 26.2 miles). This seemed like a great excuse for a meal heavy on the carbs! All the recipes for this month came from The America’s Test Kitchen Family Cookbook Third Edition (© 2010 by The Editors at America’s Test Kitchen) except for the Turkish Red Pepper Spread, which was also served at the December 2010 dinner..

I got ahead of the game by making the red pepper spread and apple turnovers a couple days in advance. The spread is simply refrigerated and the turnovers are assembled and placed in the freezer. When you are ready to bake them, just thaw them at room temperature for about fifteen minutes and then put them in the oven, turning once.

Instead of going out for dinner, we decided to have the meal the night before the race so that we would be at home and Mary and Bill could get a good night’s sleep before running the next day. First, we sat down to enjoy the red pepper spread with pita chips. The spread had in it some red pepper flakes for spice and toasted walnuts that gave it a floral note almost like, dare I say, rosewater. 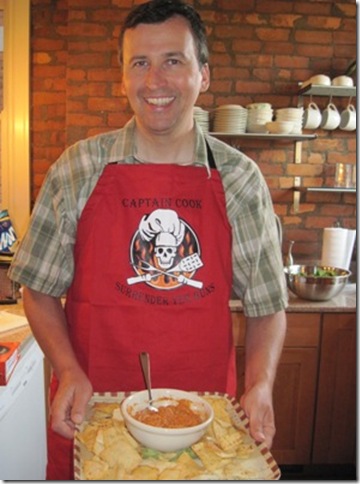 For dinner, I started by sautéing some bacon for the spaghetti and setting that aside, and making a mixture of egg and cheese, also for the spaghetti, and putting that in the refrigerator. I then washed the spinach and placed it in a big bowl. After cooking some onions, garlic and spices in olive oil, I poured the oil mixture over the spinach to wilt it, sprinkled on some feta cheese and sliced olives, and served it immediately. You need to serve the salad quickly after wilting it or the spinach will get soggy. Everyone thought the salad was delicious and it was surprising how much the spinach shrinks when you wilt it. 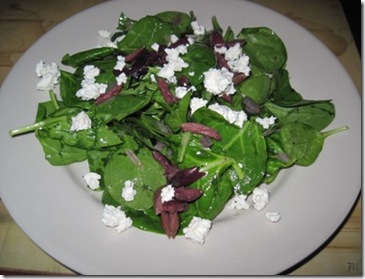 I retreated into the kitchen to make the spaghetti. I had turned on the stove so that the water for the spaghetti would start boiling while we were enjoying the salad course. It was a simple matter of boiling the spaghetti, draining it and then tossing in the other ingredients. One hint from the cookbook is to put the serving bowl in the oven at 200 degrees Farenheit to warm up (obviously it has to be an oven safe bowl) and that, combined with the heat of the boiled spaghetti will cook the raw eggs in the egg and cheese mixture. I plated it up and served. The spaghetti was creamy without being heavy and the wine was a perfect accompaniment. It neither overpowered the dish nor got lost in all the creamy goodness. 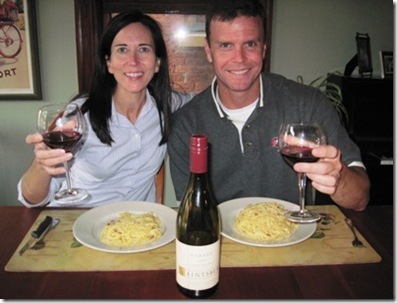 Next, we had dessert. There is nothing like running a marathon, or hosting marathoners for a weekend, to give you a good excuse to eat dessert! The turnovers took a little over twenty minutes to cook and came out flaky, golden brown and as light and fluffy as a baby’s breath. I had some whipping cream in the refrigerator so I got out the hand mixer and whipped us up some fresh whipped topping to go with the turnovers. 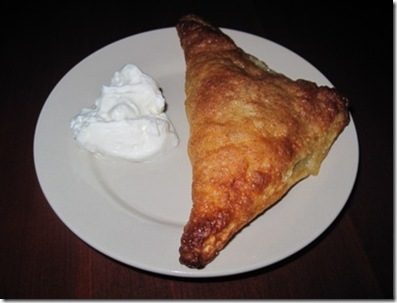 It was a delicious and filling meal, fit for the training table. And by the way, the next day Mary and Bill both finished their respective races. Mary finished the half marathon in about two hours and twenty minutes (2:20) and Bill crossed the finish line of the marathon in just over three hours and fifty-seven minutes (3:57). Congratulations to both of them, and I’ll take some of the credit due to my cooking. 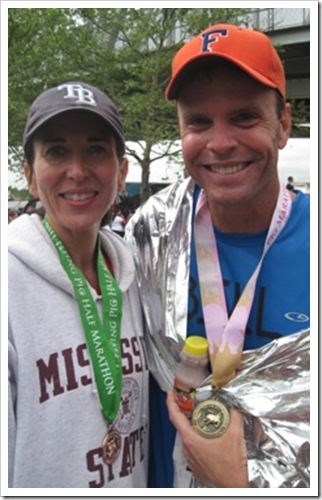