One thing you need to know about Christine is that she loves the bubbly. It doesn’t matter if it is champagne, prosecco or cava; if it sparkles, she’s a fan. I think it matches her sparkling personality. So when picking out the wines for her monthly dinners, I always include a couple of sparklers. Last year I picked up a bottle of Les Rocailles Brut and paired it with a brunch of quiche and cinnamon buns. She like it so much that I decided to repeat it this year. This time, however, we had as special guests - our friends and neighbors Marlane and Steve and Pam and Mike, the Naked Vinester himself. With the exception of the green salad and citrus salad, which I made up myself, all the recipes for this month came from The America’s Test Kitchen Family Cookbook Third Edition (© 2010 by The Editors at America’s Test Kitchen).

I have to say that I really love these recipes that you can assemble ahead of time and then pop in the oven. I did that with both the strata and the cinnamon rolls so that in the morning all I had to do was put them in the oven while I made the citrus fruit salad and green salad. For the strata prep I toasted the bread and then layered that in the pan with a sautéed spinach mixture and grated havarti cheese. I then poured over the layers a mixture of eggs, half and half and a little white wine. The strata went in to the refrigerator overnight. One tip from the cookbook is to put plastic over the strata and then place plastic bags of sugar on top as weight. This helps force the egg mixture down into the lower layer of bread.

I had a little trouble with the cinnamon rolls, as it was a particularly humid night and I accidentally added a little too much liquid to the dough. It was very wet and sticky and I was just about to throw it out and start over. Fortunately, Christine was there to talk me down. We added extra flour, got the dough into a nice ball, put it in a bowl and left it alone. A couple of hours later it had risen properly and I was able to assemble the rolls and get them into the refrigerator, ready to be baked the next day.

In the morning I made the citrus salad while Christine rode her bike to the Bellevue Farmer’s Market where she picked up some beautiful spinach, lettuce, cucumber and asparagus for the green salad. At the appointed time, the guests arrived and while we chatted and sipped mimosas (not made with the Les Rocailles, heaven forbid) the strata was baking. We served it up with the salads. 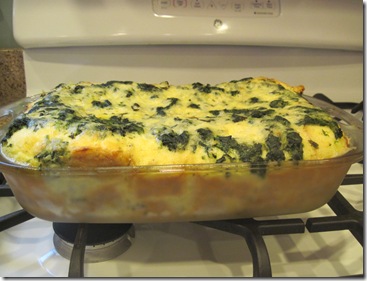 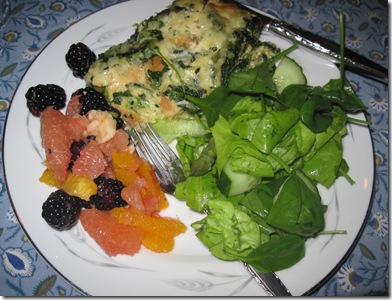 While we enjoyed the strata and salad course, I put the cinnamon rolls in to the oven to bake. After they came out golden brown, I drizzled them with a cream cheese and sugar icing. I served them with some great tasting Starbucks House Blend Coffee. 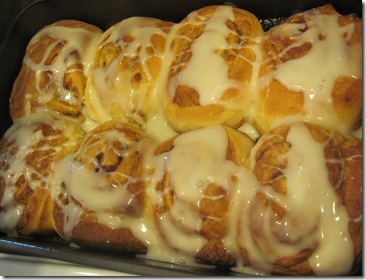 Everyone thoroughly enjoyed the cinnamon rolls that were (almost) as big as their heads. We even had enough left over to send a couple home with everyone. 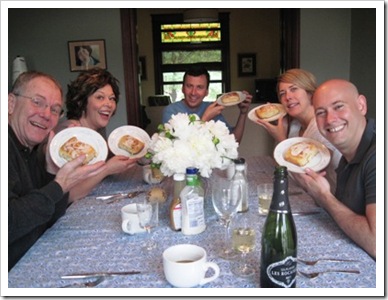 As Mike has told us many times, sparklers are very food friendly wines and can go with a wide array of cuisines. In this case, I think it was a great accompaniment to the variety of flavors from the egg-y, cheesy strata to the acidity of the citrus salad. On a personal note, this meal rated high on the fun-meter. Of course, with company like this, every meal is delightful.