The joys of social media continue. I learned that tomorrow, September 1, is National Tempranillo Day from my new friends at TAPAS – The Tempranillo Advocates, Producers, and Amigos Society. They invite everyone to open a bottle of Tempranillo on that date, drink up, and share the experience on Facebook and on Twitter at #TempranilloDay. They were also kind enough to send along some samples of Tempranillo grown in the good ol’ USA for me to try.

I’d not heard much about North American tempranillo. It’s a grape indigenous to Spain. It’s the main grape used in Rioja and Ribera del Duero wines. There’s also plenty of relatively inexpensive Spanish tempranillo out there. I’ve always found it to be an incredibly flexible food wine. It’s a good summer red option as it’s usually not overly heavy. It’s one of my favorite alterna-reds.

I’d long wondered why this grape isn’t grown in many US wine regions, especially some of the warmer, drier regions of California. It’s a grape that thrives on big temperature swings and dry weather. (I’d enjoy seeing what tempranillo would do in Temecula, outside of San Diego, for instance.) A growing number of winemakers have decided to take a swing at it and I was interested to try this new bounty.

I wanted to spread the wealth, as well. Our friends Milwaukee Mike and @gourmetgroup were hosting a “wine club” gathering at their place. This was our first ever visit to this gathering. The samples showed up just before the scheduled date, so I offered to bring the wine for the group to sample. I didn’t have to twist arms too far. (Also, we discovered were were the lone childless couple, so the Sweet Partner in Crime and I concluded that the club made an excellent excuse to go somewhere after dinner and extend the evening if a sitter was already lined up…)

While high-end Rioja and Ribera del Duero can run into the triple digits, much Spanish tempranillo you’ll find in your local wine store will probably be under $15. Since there’s not a huge amount of tempranillo grown in the US, the prices tend to be a little bit higher. The retail on these samples were between $15-30. I cracked the wines and let the assembled folks have at it. A few decided to play along and help me with tasting notes. Milwaukee Mike, who spent much of the evening wrapped around a bottle or other of Rivertown Brewery Hop Bomber Ale (a Cincinnati concoction which my beer drinking readers need to check out!), gave this helpful note: “They all taste like red wine.”

We had six tempranillos to try – five from California and one from Washington. @gourmetgroup laid out some delicious tapas (the manchego/prosciutto fritters were divine!) and we set to it: 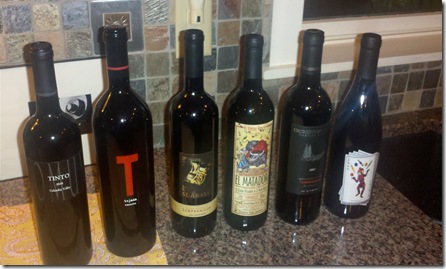 Duarte Georgetown 2007 “Georgetown Divide” Tempranillo – When all was said and done, this wine from Modesto, CA was the big winner of the evening. This wine had little other than positive comments all evening, especially once it had opened up a bit. “Not too fruity,” said the Sweet Partner in Crime, “with some nice mineral on it. Tastes like a European wine, which I like.” @gourmetgroup enjoyed the balance – as did I. My tasting sheet has “Balance!” double underlined. Big cherry notes and a long finish on this. It was the most expensive of the group, retailing at $29.

Pomum 2008 “Tinto” Tempranillo – from Yakima Valley in Washington comes this one, also a crowd favorite. It’s made mostly from tempranillo with some Grenache and merlot thrown in for good measure. It’s a very “solid” wine. @gourmetgroup described it as “tight” and “bracing” – by which I think she meant that you get a whole lot of flavor all at once. Jammy was her thought. An easy drinking, all around quality wine. $25.

Ripken Vineyards 2008 “El Matador” Tempranillo – This wine from Lodi, CA won the award for the best comment of the evening. “This smells like dirty bulls’ balls” said @gourmetgroup. The assembled, for whatever reason, did not press her on how she had definitive evidence of this, but we digress. “Inoffensive but not interesting,” said the SPinC, “Not doing much for me.” I noted that it was a bit funky and earthy, but only stays with you for a moment. I described it as a “hi/bye” wine. At $22, not our favorite.

St. Amant 2008 Amador Tempranillo – Also from Lodi, CA, but the response from the assembled was the other pole from the Matador. The Fat Bastard chimed in with, “This is very easy to drink and goes with every bite of food I’ve tried,” he said, “I can’t say this so much about the others, but I would buy this wine.” This was my favorite of the bunch. I thought it tasted a little like a pinot. Nicely complex, balanced, and just downright tasty. @gourmetgroup wasn’t quite as hot on it, thinking that it needed food. The SPinC thought it was the easiest of the bunch to “just drink” – meaning that it didn’t cry for food. A number of other folks thought so too – it was the first bottle to bite the dust. It’s perfect for parties where folks are just drinking and socializing while nibbling on lots of different foods – like…say…tapas. $23.

Stein Family 2007 “Just Joshin’” Tempranillo – From Napa, CA. This wine with the joker on the label drew decent reviews. I thought it was straightforward and a bit tannic. “Decent, but that’s as far as I’d go,” said my note. The SPinC really liked that it wasn’t a fruit bomb – which is a bit surprising in a wine from Napa. She thought it was a bit “thin,” but that was OK with the profile. @gourmetgroup said that it was “friendly, not aggressive” and “pleasant but with some depth.” At $15, the least expensive of the group.

Tejada Vines 2005 Reserve Tempranillo – “Bring on the funk!” exclaimed @gourmetgroup as she hoisted the last wine of the evening. The SPinC, always a fan of “dirty wine” (as I put on my tasting sheet) wrote, “This is great, IMO. Low fruit, funky but not heavy, but still with a full flavor. Would be so, so yummy with food.” I concurred. I thought that its funkiness (“it’s Parliament, not Prince,” I’d written for some reason) screamed for a steak. This wine also came in a heavy, industrial strength bottle. By “heavy,” this bottle weighed more empty than many bottles of pinot grigio weigh full. Or at least it seemed that way by that point in the evening. Milwaukee Mike considered keeping the empty bottle by the bedside for home defense. “That’s quite a punt,” said @gourmetgroup with a look in her eye that frightened me a bit. $25 and worth it.

I’ll be interested to watch the tempranillo market over the years ahead. If these wines are any indication, there’s an opportunity for U.S. winemakers to make a broad range of styles up and down the west coast, much as they’ve done with shiraz/syrah and merlot. It will certainly be fun to follow.

On a personal note, a big thank-you to our hosts and the other members of the wine club for being such good sports about my little tempranillo experiment. Good fun.