Wine and Dinner of the Month Club – August 2011

August brings us a very local based meal with fruits and veggies from our garden and a couple farmers markets. The wine is a nice sparkling wine with a twist – it’s a rose. The recipes this month, with the exception of the tapenade which I just made up on my own, are from The America’s Test Kitchen Family Cookbook Third Edition (© 2010 by The Editors at America’s Test Kitchen). Enjoy.

What I had planned for this month was a Mexican inspired meal using dried hibiscus flowers in all of the recipes. Do you know how hard it is to find dried hibiscus flowers in Cincinnati, particularly on short notice? Not that easy. I’ll have to plan for this meal a little better next time. Fortunately, Christine was in the mood for a less exotic meal made with some of the local goodies we had in our garden and from other local sources. I started the ratatouille by chopping the vegetables and mixing them with olive oil and some spices. The tomatoes and squash for this dish came from our garden and the eggplant and onion came from McGlasson’s Farm, a farm with a produce stand along the Ohio River about 13 miles from our house (http://www.mcglassonfarms.com/). Everything went into a baking pan and into the oven.

While that was baking I prepared the appetizer. We had a lot of little cherry tomatoes and some sweet peppers and I was wondering what I could do with those. In this situation my motto is “olive oil and garlic to the rescue.” I cut up some tomatoes and the peppers and blended them in the food processor with some olive oil, garlic, salt and pepper. It made for a yummy spread on crackers with a little goat cheese. 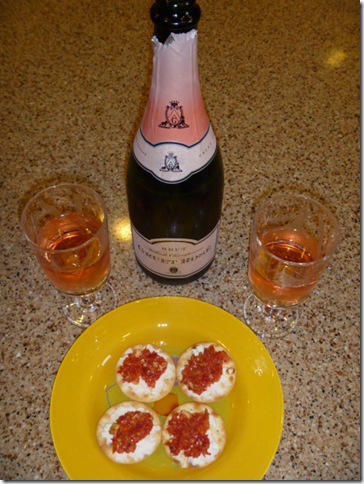 Since the ratatouille was still baking, I got started on the rice for the side dish. We recently acquired a rice cooker and if you follow the directions correctly it makes pretty good rice rather flawlessly. The key phrase here is “follow the directions correctly.” I thought I had done just that, but it turns out I did not add nearly enough water for the amount of rice I was cooking. Is rice supposed to be crunchy? I don’t think so. Christine, who is more adept with the rice cooker, pointed out the error of my ways and we made another batch that turned out perfect – firm but tender and nice and fluffy. I plated this up with the ratatouille and we sat down to dinner. 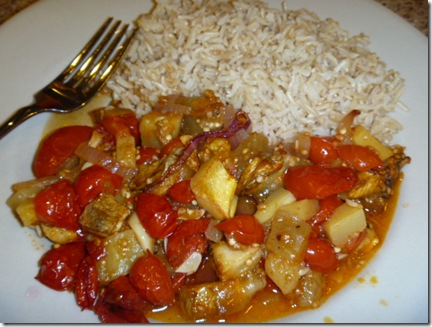 The wine went well with both the appetizer and the main course, which you would expect from a very food friendly sparkling rose. There was not a lot of fat in either dish so the wine didn’t have to compete against that, and the sweetness helped offset some of the acidity from all the tomatoes.

Finally, we had dessert of baked peaches. The peaches for this dish came from McGlasson’s as well. I also made up a raspberry sauce to go over top of them, creating a type of Peach Melba. Pouring a splash of bourbon over the peaches gives them extra flavor and creates additional sauce in the pan to put on them. They were great with just a little vanilla ice cream. If I had it to do again, I would change two things. First, I would not make the raspberry sauce. The sauce from the baking pan is enough to
give the peaches some additional moisture and I thought the raspberry sauce rather overwhelmed the peach flavor. Second, even though the recipe did not call for it, I would peel the peaches. Even after baking the skins were a little tough and hard to cut through with a spoon, particularly since the peach
flesh was so tender. 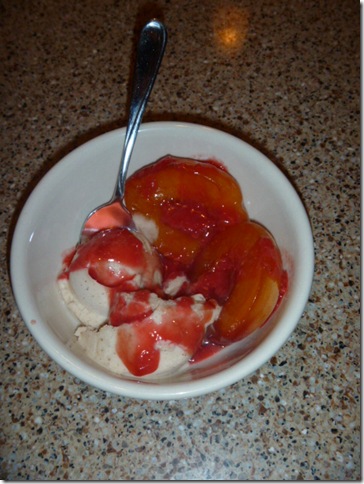