For September, I took a different course in preparing the meal. I used the slow cooker. I always forget about the slow cooker, and when I use it I wonder why. It’s a simple matter to put the ingredients into the pot in the morning and when you are ready for dinner everything is cooked to tasty perfection. I highly recommend you give it a try.

For some reason, we had a lot going on in September so I was looking for a meal that could be prepared with a minimum of fuss. A slow cooker recipe was a natural fit. Generally Rioja goes well with roasted meats such as lamb or duck so I opted for a lamb dish. The recipe originally called for lamb shank, but when I went to the grocery store they were out of the shank so I opted to use some shoulder cuts. It worked out to be a perfect substitution. I figured the beans, mixed with some spices, onion, carrot and celery would make for a good savory accompaniment.

One thing to remember about dry beans, which I prefer to the canned variety, is that you will probably have to soak them overnight. If you remember that tip, it will save you from scaring your wife to death when you jump out of bed at night shouting, “I forgot to soak my beans!!!” With the beans appropriately soaked, the next morning was a breeze. I coated the lamb shoulders with a mixture of flour, salt and pepper and browned them lightly on all sides. They went into the cooker on top of the beans with a sprig of rosemary tucked underneath. I then cooked the vegetable mixture which included onions, carrots, celery, garlic, the zest and juice of an orange, some beef broth and a little red wine. After this mélange softened I poured it over the lamb and beans and set the cooker on low. Here’s a little tip I like for celery or some other vegetables: if you need just a little bit and don’t want to buy, for example, a whole stalk of celery, pick up just what you need at the salad bar if your grocery store has one. [Ed. Note -- For this tip alone, we forgive his tardiness...]

While the lamb was cooking I rolled out the dough for the pop-tarts, which I had prepared the night before and stored in the refrigerator. The tarts are simple to assemble by cutting out rectangles of dough and putting strawberry jam inside. Once assembled the pop-tarts went into the freezer until ready to bake.

At dinner time I put out a cheese plate of crackers and a couple cheeses, including a delicious goat’s milk Gouda. 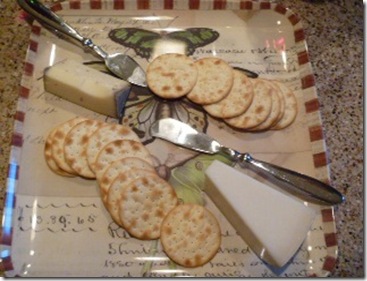 After the appetizer, I dished out the lamb and beans and served them with the wine and some crusty bread. The lamb was fall off the bone tender and the juices from the lamb and the vegetable mixture had combined with the beans to create a deliciously savory and hearty meal that paired well with the fruity dryness of the Rioja. 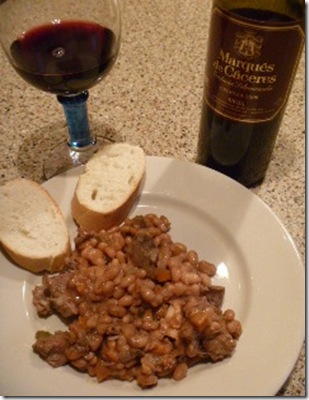 While we ate dinner, I had the pop-tarts baking. After taking them out of the oven and letting them cool, I sprinkled them with confectioner’s sugar and served with fresh strawberries. My only problem was that I forgot to cut slits in the pastries to let out steam and the filling overflowed out of the crust. They were still tasty and I heard no complaints. 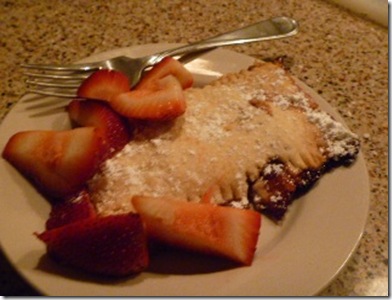 This was a delicious meal and very easy. I can certainly see doing more slow cooker recipes, particularly during the cold winter months ahead.