Walk into GABP and you’ll run across a cornucopia of food and drink options. At its heart, though, Cincinnati is a dog-and-a-beer sort of town. That’s why I was a little surprised to see Lance Lambert’s recent article in the Enquirer about W1NE for One, a partnership between Steelhead Vineyards and one of the Reds’ favorite sons, Hall of Famer Joe Morgan. 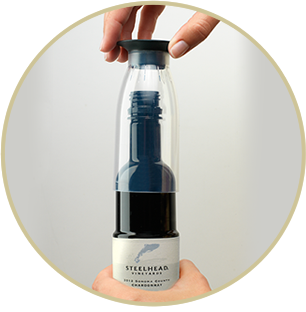 W1NE for One (which is currently driving my spellcheck bonkers) is marketed as the “next generation of single serve wine.” I’ll admit – it’s like nothing I’ve seen before. The wine comes in a plastic 187ml screwcap bottle. The “cap” is actually the bottom of a plastic wine glass – so there’s no need to pack along additional glassware and you actually get to feel like you’re drinking a glass of wine while you’re out, rather than surreptitious sips out of a Solo cup. I think it’s a great concept for picnics, hikes, concerts, and other such out-of-the-house situations.

Morgan, who became interested in wine during his stint with the San Francisco Giants (where he once made a barrel of wine under the instruction of Robert Mondavi), thinks the New Zealand-designed bottles are the key. “This wine is great for a setting where you are around a lot of people, or somewhere you might bump into people, because of the bottle’s size,” he told Lambert.

After reading the article, I shot a note to Steelhead Vineyards. Katy Leese, who owns Steelhead with her husband Dan, was good enough to send me some sample bottles of W1NE for One, as well as a couple of other Steelhead wines available in the Cincinnati area.

W1NE for One comes in two versions:

If I wanted to, I guess I could give you detailed tasting notes. Honestly, that’s not really the point of these wines. These are to be cracked and poured when you’re thinking about something else -- and in this case, “something else” could easily be an 0-1 pitch to Joey Votto with Shin-Soo Choo on first and two out in the bottom of the sixth while you’re having a conversation with a buddy sitting next to you. In that environment, who’s really paying attention to bouquet, finish, and whatnot? My quality requirements are simple. I want to take a sip of something that tastes decent without worrying that I’ll go, “Ew.”

These wines fill that bill. Neither one is going to blow your doors off. The merlot is solid and standard in the flavor department. It’s got pretty decent plummy fruit with enough tannin to give it a backbone. The chardonnay is a mild California version. There’s some creaminess, some gentle apple flavors, and a little more oak than is my typical preference. I preferred the merlot, but I wouldn’t turn down either one of them if someone offered them to me. Will these wines replace beer as my gametime beverage of choice? Not likely. But I could certainly see times when these wines – and their super convenient delivery systems – would be just what the doctor ordered.

Unfortunately, with the potential of the playoffs upon us, I wasn’t able to do what I *really* want to do with these wines. If a ballpark’s going to be offering wine as a beverage option, then the wine should be enjoyed in its natural state – paired with ballpark concessions at GABP. I want to know how these wines taste with a loaded bratwurst, nachos, ballpark peanuts or funnel fries. You know, for science. The public deserves to know. So, if the Reds have the good fortune to be back at GABP for the playoffs and you'd like to do some advance scouting – the Vine wants your comments.

(And if you don’t know what funnel fries are…you’re missing out. Mo Egger, one of the hosts on ESPN1530, turned me on to these things. They’re stop-your-heart delicious.)

W1NE for One will set you back $10 at GABP. For reference, a 187ml bottle is one-quarter of a full-sized bottle – so a little more than a standard glass. Ballpark pricing, after all. In local stores or on the Steelhead website, you can get a case of 24 individual bottles for $96. Steelhead donates part of the proceeds from the sale of each bottle to various conservation efforts.

Steelhead also sent us two other wines, both of which normally retail from $12-15:

First up, the Steelhead Red. This red cuvee is a little curious, flavorwise. It’s a fairly substantial wine that comes on strong with plum and blueberry fruit. That flavor kicks into cherry in the middle, and finishes with a good balance of fruit and tannin. I wondered at the time if it might be some sort of Zinfandel-based blend, and after checking the specs, I was dead on. It’s about 70% Zin, with petite sirah, syrah, and a couple of other grapes rounding it out. I preferred it with food to sipping it on its own. Think about it as a “California Barbera” pairing-wise. Barbera goes really well with red sauces and spicy meats, like sausages, as a rule. We had this alongside homemade pizza with a goat-cheese blended red sauce, salami, basil, and lots of garlic. With those flavors – meat, spice, richness – it was a champ. I’d get it again for that alone.

The sauvignon blanc is one of the lighter ones  I’ve tasted in awhile. “If I tried this blind, I might think it was a pinot grigio,” quipped the Sweet Partner in Crime. It’s quite light, with a nose and flavor of pineapple and grapefruit. The finish starts tart and finishes up with just a little bit of sweetness crossed with lemon rind. I’d put it in the “serviceable, flexible quaffer” category. By itself, it’s in the pool wine category, but it went along happily enough with a cod-based fish stew with potatoes, fennel, and garden tomatoes. Would be a little pricey at $15, but if you can find it for $10 and you want something light and food-friendly, you can be comfortable snagging it.
Posted by The Naked Vine at Saturday, September 28, 2013