Our tour of Turkish wines takes us to Izmir in the heart of the Aegean winemaking region and one of the “older modern” wineries in Turkey, Sevilen Winery.


Sevilen celebrated its 70th anniversary last year at the Isabey Vineyard and Winehouse, Sevilen’s on-site fine dining restaurant. The winery was founded in 1942 by Isa Guner, a first-generation immigrant to Turkey from Bulgaria. Guner’s travels in France planted the mental seeds for Sevilen, and the vineyards sprouted soon after. Now managed by third generation of the Guner family, Sevilen draws upon the winemaking expertise of Florent Dumeau, a consultant from Bordeaux, to produce its wines; as well as a partnership with a Turkish university to create better barrels from French oak.

Sevilen’s estate-grown grapes are sourced from two main Aegean areas: from the coastal region around Izmir and from the Güney plateau somewhat farther inland. The two areas are climactically different. Izmir is warmer, similar to the weather around Athens – while Güney, at an elevation of 900 meters (about half a mile), has a climate closer to the Rhone region of France.

We received samples sourced from both of these areas. We did the sampling a little differently. As part of the package, we had pairs of Syrah-based and Sauvignon Blanc-based wines. Each was from a slightly different terroir, so we tasted those side-by-side to check out the contrast. We also had two other wines, a rosé and a Kalecik Karasi, a Turkish indigenous wine. Word to the wise if you get a chance to try Turkish wines. These wines really require some air to reach their full potential. Decant the whites for at least 15 minutes and the reds for half an hour or more. Let’s start with the side-by-sides: 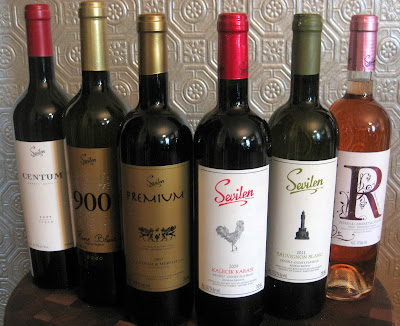 This pair of Sauvignon Blancs provided an interesting contrast. (Just for information’s sake – Fumé Blanc is just another name for Sauvignon Blanc.) The “non-numbered” wine, which runs about $15, is almost austere until it gets enough air. Once it had time to breathe a bit, it settled on my palate with plenty of lime and apple. I found a fair amount of tropical fruit on the lean body along with a powerful backbone of mineral. It reminded me a lot of Muscadet with more tropical flavors.

The 900, which is only available in limited quantities for around $25, was one of the more interesting wines I’ve had in awhile. “It tastes like a margarita!” exclaimed the Sweet Partner in Crime, and she didn’t mean that in an “I’m on the beach in Mexico” manner. The nose is lime and green apple, with some more apple on the palate initially – but the finish becomes a rocketship of lime and mineral that made me pucker. Even after lots of air (and even the next day), there was enough lime in this wine to cure scurvy. If you like really acidic sauvignon blanc, this might be a wine for you. I didn’t mind it, but the SPinC had a strongly negative reaction.

With food – specificially shrimp roasted in herbs -- the less-expensive Sevilen was the superior wine. I’d get that one again. I’d probably pass on the 900.

The Centum is a full, rich, opulent wine. It’s a full-tasting wine without being too overly heavy. I found lots of dark plummy fruit and exceptionally well balanced tannins. The texture on this wine was lovely. There’s a big nose of vanilla and caramel. I thought this was a really nice wine, and the description of similar terroir to the Rhone is apt here, as the flavor ends up in the neighborhood of a high-quality Cotes du Rhone. It also calls out for Big Food. We grilled up some lamb burgers and sautéed up some potatoes to go alongside the pairing. The Centum was exceptionally good with the burgers. It also worked well with some strong Roquefort cheese that we tried for dessert. It retails for around $30.

While both these wines need air, the Premium does especially after we discovered its flavor does something uniquely odd. At first, it was very pleasant – not too heavy, nice spicy fruit, and a balanced nose of blueberry, cinnamon, and a not-unpleasant scent of roasted meat. It was more tannic than the Centum. After about 15 minutes, the nose’s fragrance utterly vanished. The wine had flavor but no scent, which was weird. Another 15 minutes later, the nose changed to something that smelled like wet brown paper towels like you’d find in a grade school – and then it returned to normal. (Interestingly, the Centum did something similar after being open for a couple of hours – but the “nose neutralization” didn’t last as long.) The Premium wasn’t bad on its own. It wasn’t as good with the lamb, but with the potatoes it was actually a better pairing than the Centum. Go figure. (Note: I couldn't find a price point for the Premium.)

Sevilen 2009 Kalecik Karasi Denizli-Güney – Kalecik Karasi has become one of my favorite Turkish indigenous grapes, but definitely take heed of my “let these Turkish reds breathe before you drink them” advice with this one. After only a few minutes open, it’s tannic and almost sour. There are few wine metamorphoses I’ve experienced more dramatic than this wine has after decanting and some solid swirling. The tannins and tartness mellow and blend into a fragrant nose of vanilla, plums, and fresh cut wood. The body is fullish, with tarry, black fruits abounding. The finish is full of coffee and more dark fruit. We were making kebabs the night we opened this because I figured, “Hey! Turkey! Kebabs!” With the ingredients we had around, the meal’s flavors ended up being much more Cajun than Mediterranean in nature, especially with a side of red beans and rice. Even alongside those spices, this was quite a nice pairing. I would recommend it, especially at $15.

Sevilen 2010 “R” Syrah-Cabernet Sauvignon Rosé Izmir/Menderas Valley – A very pleasant, straightforward rosé, and the first of the Turkish wines that didn’t require at least 10-15 minutes of air when opened. There’s a very pleasant peach and vanilla nose. Those flavors are echoed on the palate, which is on the lighter side and gently fruited. Weightwise, it’s along the lines of a Cotes du Rhone rosé. The finish is soft, slightly grapefruity, and lasting. An excellent choice with many foods, too, I would imagine. We had this alongside a “Spanish Mixed Grill” – chorizo sausage, chicken thighs in an adobo-lime-garlic marinade, and yellow rice. The fruit held up just fine against those spices and flavors. I’d certainly give this a second try. And it’s very reasonable at $13.
Posted by The Naked Vine at Sunday, September 15, 2013