I received an invite to a “Wines of Turkey” guided tasting that sounded absolutely fabulous. Only trouble – the tasting was in Bordeaux, and the Vine’s travel budget is…shall we say…not quite that stout. I contacted Wines of Turkey directly and had a good conversation with Taner Ogutoglu, the director of this organization, which serves as an umbrella publicity group for a number of Turkish wineries and winemakers. 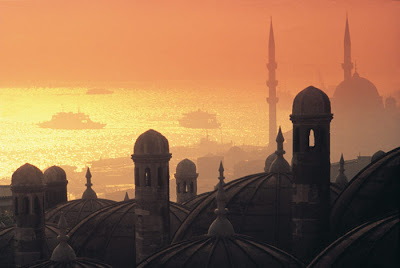 He offered to pass my information along to some of his colleagues around the country. Next thing I knew, I had some samples on the way. I didn’t know a lot about Turkish wine, needless to say, so I wanted a little background before the bottles started showing up at my door.

Winemaking in Turkey dates to pre-Biblical times. Evidence exists that winemaking was going on in what is now the Turkish province of Anatolia 7,000 years ago. The natives of that region introduced wine to Greek colonists in the 6th century BC. From there, word of Turkish wine spread to Italy and France. With the rise of the Ottoman Empire, wine production waned because of religious reasons. Most wine produced in Turkey during the life of the Empire (1299-1923) was carried out by non-Muslim minorities – Greeks, Armenians, and Syrians. There were “wine bars” in Christian neighborhoods where citizens could purchase wine. There were occasional religious bans on the sale and production of alcohol, but they never lasted very long. (More on this in a bit.) During the European phylloxera outbreak in the late 19th century, Turkey’s wine production soared to keep up with the demand from France and Italy.

With the formation of the Turkish Republic in the 1920’s, most of the winemaking fell under government control, but a couple of world wars blunted the growth of the industry. In the latter half of the 20th century, into the beginning of the 21st, wine tourism became a major force in the Turkish economy. Word spread about the interesting native wines (of which there are nearly 800 named indigenous varietals), and the excellent terroir for growing “standard” vinifera grapes like Cabernet Sauvignon. Turkey is still a relatively small player on the world wine production stage, but this may be changing soon. 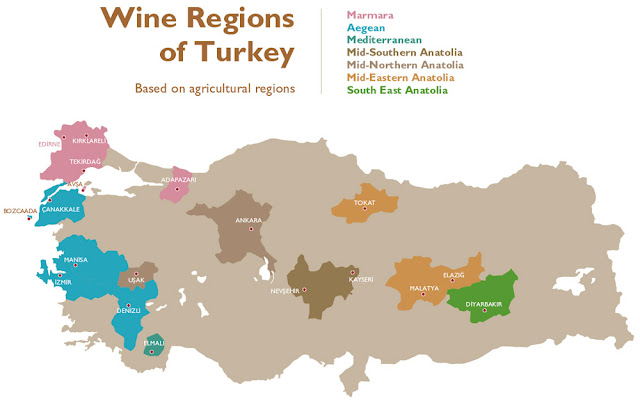 Most wine produced in Turkey comes from three major growing regions: Thrace (also called Marmara), on the northwest coast near Istanbul; the Aegean region, especially near the city of Izmir farther south down the coast by the Aegean sea; and in the mountains in the aforementioned Anatolia surrounding  the Turkish capital of Ankara. There are other pockets of wine production around the country. The size and geographic diversity of Turkey (it’s larger in square miles than Texas and longer than California) provides a variety of growing areas and climates.

As I mentioned, Turkey has had a number of brief periods of wine-related restriction in its history. We may currently be moving into another one of these times. In June (actually, just after the tasting I mentioned), the Turkish government passed major restrictions on the sale of alcohol. The new regulations make it illegal to sell wine during evening hours, forbid wine displays where they can be seen from a street, and prohibits advertising and promotion of wine. Winemakers hoping to stay afloat will undoubtedly begin offering more wines for sale internationally, so now’s a good time to get in on the ground floor.

What’s Turkish wine like? The notes I took have a lot of “reminds me of” statements in there. The Turkish wines I’ve tried thus far have been quite “old world” in terms of general weight and flavor. I love Mediterranean flavors, and alongside that sort of cuisine, these are winners. One thing I’ve discovered to be near universal. These wines – both reds and whites – need air. Give them plenty of time to decant and swirl them strongly, initially. Otherwise, there’s a bit of an odd alkaline characteristic which, fortunately, fades pretty quickly once it gets some oxygen.

The first set of samples I received were wines from Kavaklidere, Turkey’s best known winery. The main winery is located in Cappadocia in the Anatolian region, but they have satellite vineyards across the country. I received two bottles each of their “Prestige” and “Pendore” label wines. The Prestige wines are from Anatolia, while the Pendore wines hail from the Aegean region. The price point for these wines is usually around $25-30, but if Turkish winemakers have to increase export production – look for those prices to drop. 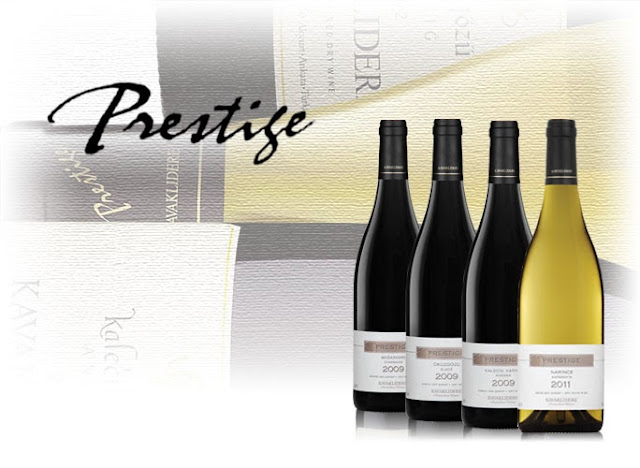 Prestige 2009 “Ankara” Kalecik Karası – One of the native grapes, pronounced “KAH-le-djic car-AH-suh,” is a Pinot Noir-ish grape. The translation of the name is “black from the small castle,” referring to the town of Kalecik which has, well, grapevines and a castle! The wine struck me as halfway between a Burgundy and a Chianti. I found it to have a very nice smelling bouquet – with strong scents of cherries and some fresh-cut wood. The initial weight feels light but it finishes strong. The bright cherry up front transitions to vanilla and then into a lingering wood and smoke finish that “bigs up” the flavor. We liked this a great deal. We had this alongside some homemade veggie burgers with a chickpea, pearl couscous, and quinoa base and some roasted beets. It’s $25-30, but as we concurred as we were talking about it later in the evening, we don’t buy a lot of $25 wine. But if we’d paid $25 for this, we wouldn’t be at all disappointed.

Prestige 2010 “Cappadocia” Narince – Pronounced “Nuh-RIN-djeh,” the name of this white grape means “delicate.” If you’re a fan of stuffed grape leaves, traditionally the leaves are from Narince vines. We read the tasting notes to try to find a good pairing, but they were translated from Turkish, so they were a little vague. I expected a flavor like a chardonnay, so I thought about using it with grilled barbecue chicken breasts with some foil packed veggies. Nope. The wine was much lighter than a chardonnay and quite minerally. It also had this weird sharpness at the end. We didn’t like it at first, so we recorked and put it back in the fridge. It hit me later…that weird sharpness was akin to the sharpness at the end of a Muscadet, which can taste almost metallic. Muscadet is a great pairing with shellfish, though. So, the next evening, we made mussels in white wine and garlic with white beans and prosciutto – a pairing we knew would work with most Muscadet. We were dead on. The flavors meshed nicely. I think it’s a bit overpriced, but if you’re into Muscadet, money is no object, and you want a change of pace, it’s not a bad option. 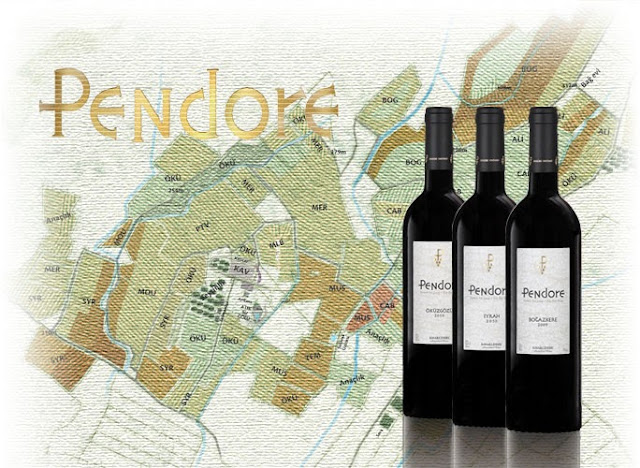 Pendore 2009 Öküzgözü – If there’s a more rock and roll grape in the world, I don’t know what it would be. I mean, four umlauts in eight letters! Crank up the Dokken! The grape is pronounced “Oh-cooz-GOE-zue” and translates as “ox’s eye.” The berries of this particular kind of grape are some of the largest in the winemaking world. The description made it sound like a pinot noir, but it’s actually considerably heavier than that. I thought it was much more like a merlot-based Bordeaux as anything. Lots of blackberry flavors here, along with a really nice earthiness and a lingering finish that’s full of cocoa. As such, it was too much for the chicken/asparagus/fontina combination we’d made for dinner that night, as it was just too heavy. It needs to be served alongside a good with a little more oomph, like grilled meat or some punchy cheese. We had most of this bottle on its own over the course of a relaxing evening. When we pulled out the evening dark chocolate, the Öküzgözü was a deliciously sultry pairing. Thumbs up.

Pendore 2008 Boğazkere – This was my favorite wine of the set. Pronounced “Bow-aahz-KEH-reh,” the name of the grape translates somewhat unfortunately as “throat scraper,” which is far from the truth, in my estimation. To me, once it had some time to breathe, it was reminiscent of a really nice pinot noir. It had plenty of what seems to be the Aegean terroir-based smokiness along with lots of dark, subtle fruit in a reasonably weighted body. Where it really shined was with a somewhat decadent dinner of grilled lamb loin chops with a marjoram/garlic/butter sauce along with some quick-sautéed zucchini. A meal like that sports lots of rich flavors, which the ample tannins in this wine handled with ease. Following Naked Vine Wine Pairing Rule #1, the   lamb made a truly scrumptious pairing. I felt like this wine certainly deserved the pricetag.

Over the next several weeks, I hope to provide some notes on other Turkish regions and grapes. In the meantime, ask for them in your local wine store. Turkish winemakers need our help with demand!
Posted by The Naked Vine at Monday, August 05, 2013