The results of May’s 2013 Sommelier Wine Awards, a British-judged international country-on-country wine competition, were released in “Imbibe” magazine.  Quoting from that press release:

“The real surprise of 2013 comes from “forgotten” wine nations of Europe, such as Turkey, Greece, Slovenia and Lebanon. Spearheaded by producers like Kavaklıdere and Arcadia, these countries gave some of the more established wine regions a run for their money. Turkey took the competition by storm, moving to 10th place (ahead of the US and Germany!) in the medals league table. [I]n one fell swoop, the country has positioned itself as a place that ought to be on every restaurant’s radar.”

In my own wine judging event, held over a period of several weeks with a very exclusive panel of judges (two counts as a panel, yes?), I’ll make the definitive statement that I will certainly be looking for these wines as they appear on my wine store’s shelves. The second batch of Turkish samples I received were from Arcadia Vineyards. If you pop back to the Vine’s first Turkey column, I had samples from two of the three main wine growing regions – Anatolia and the Aegean region. Arcadia’s wines are from the third region: Thrace, sometimes known as Marmara. This region is on Turkey’s northwest coast near Istanbul and the Turkish border with Bulgaria and Greece. About 40% of the country’s total production comes from Marmara/Thrace.

This set of Arcadia samples centered on more well-known “Western” varietals such as cabernet franc and sauvignon blanc, rather than the indigenous varietals such as Kalecik Karası, Öküzgözü, and Boğazkere. Narince (pronounced “Nuh-RIN-djeh”) was the only indigenous grape to make an appearance. There’s a disclaimer on the bottom of each wine description on the Arcadia website that suggests giving a bottle 5-10 minutes of air before serving. As I’ve discovered, that seems to be a universal characteristic of Turkish wine. The “Turkish Ten” is a minimum guideline for the whites. Let the reds really get some breathing time for best results. 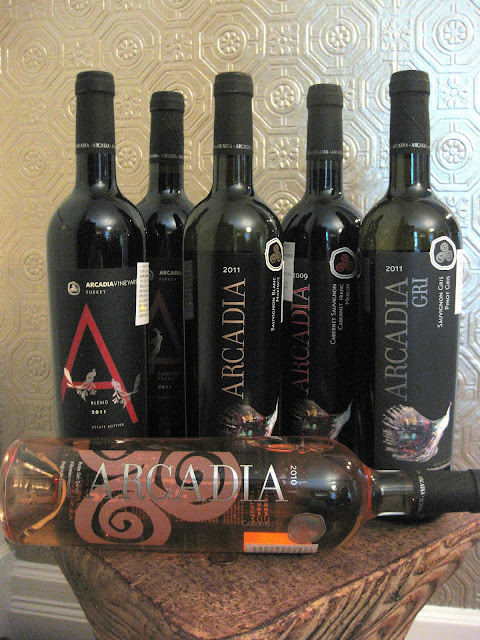 Overall, I found the Thracian wines – or at least the ones from Arcadia – a little more approachable than the ones from the other regions, but I’m still learning, obviously. I will keep you apprised.

Arcadia 2011 “Finesse” Sauvignon Blanc/Narince – Narince is an indigenous Turkish grape whose leaves are traditionally used to make tasty appetizers. I ran into a lush variety of floral and tropical fruits on the nose. The quick and citrusy body was followed initially by bit of an odd finish. If this wine hasn’t gotten enough air yet, it tastes a little alkaline. Once that oddness fades, which it will, it has a similiar mineral finish to a muscadet. Like a muscadet, serve it next to shellfish and it really shines. We opened this with shrimp and white beans sautéed with prosciutto. It was a lovely complement. The big fruits made the wine stand out, and the mineral flavor meshed nicely with the shellfish and beans. Thumbs up.

Arcadia 2011 “Fresh” Rosé – According to another Imbibe release, the win of a gold and a silver medal at the Sommelier Wine Awards by the rosés of Arcadia winery “would only have been more shocking had it been written in lipstick on Prince Harry’s naked butt and shown on the Ten o’clock News.” I don’t know if I would consider it quite that shocking, but I would stack this up against some of its Provence brethren. This rosé is made from cabernet franc, cabernet sauvignon, and merlot. It’s very much on the dry side. It boasts a firm nose of apples and melon. The body is extremely lean initially, but fattens up with air into a fairly broad, light grapefruit and melon body. The finish is dry and a bit clipped and also needs some air to not taste alkaline. Once it opens, it’s super-food friendly, and held its own against a cheese tortellini with corn and prosciutto. If you like a minerally rosé, you’ll like this.

Arcadia 2011 “A” Red Blend – Described on the label as a “Bordeaux-style blend of Cabernet Sauvignon and Cabernet Franc,” I had modest expectations for this wine, but these Turkish wines keep exceeding expectations. On first taste, I could certainly see its Bordeaux-ish tendencies, but for me, it tasted halfway between a Bordeaux and a Rioja, which is certainly not a bad thing in my book. The nose is quite full, with a fresh mixture of wood, cherries, and blackberries. The body’s got a nice weight without being too heavy with pleasant dark fruit and coffee flavors that tail off to a finish full of cocoa. I was paying attention to making dinner when I first tasted this wine, and the amalgamation of flavors snapped me out of my cooking reverie and made me say, “Whazzat?” I really enjoyed it. 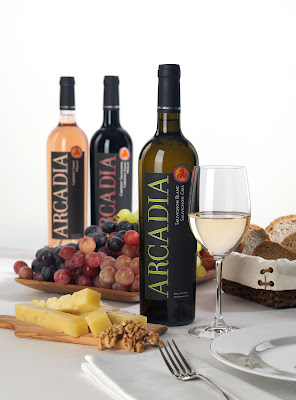 Arcadia 2011 “Gri” White Blend – This pleasant white is an 80/20 blend of Sauvignon Gris and Pinot Gris. The grapes in the blend led me to expect an acidic, somewhat lean wine. Instead, I was reminded more of a cross between a Viognier and a Riesling. It’s quite floral with some herbal scents alongside. The flavor is very rich and tropical with plenty of mango and pear to go around. The body is fairly full with just a bit of sweetness that becomes less pronounced as the wine gets some air. The finish reminds me of a lemon tart. It’s quite a nice white wine, and was an excellent pairing alongside some grilled trout filets and a bulgur salad with fresh tomatoes.

Arcadia 2009 “Finesse” Cabernet Sauvignon/Cabernet Franc/Merlot Reserve – This one needs more than 5-10 minutes of air, to be sure. Bordeaux blend that follows along those lines of flavors. The nose is full of cherry and herbs. The body is light-to-medium – again, think along the lines of a Bordeaux. The finish is a little on the sharp side, with some full tannins that emerge as the wine gets more air. We had it as an accompaniment to some grilled filets, tarragon potato salad and some sautéed mushrooms. It worked well as a table wine. On its own, it was decent, but not my favorite. (Full disclosure: the cork on this bottle was really stained, but the capsule was intact and there seemed to be no leakage. I don’t think there was any oxidation, but I couldn’t really tell.)

Arcadia 2011 “A”  Cabernet Sauvignon – I’m still figuring out the alchemy of Turkish wine. With Cabernet Franc in a blend, the wines seem French-styled, but this straight Cabernet Franc from Arcadia’s “A” line tasted more Italian. The tannins had a more minerally, chalky edge to them. The nose had plenty of vanilla and a little bit of earthy funk. The body was medium with cherry and woody flavors. The finish had a cocoa-and-graphite flavor that mellowed out over time. I get the sense that this wine is still really young. I opened it a full three hours before dinner and it was still tight as a drum when we sat down to eat. Lots of swirling eventually brought the flavors out. I’d probably stash this for a year or two.

Wines from Arcadia are still making their way to the U.S. They’re not available yet, but I have assurances from Olga at Vinorai Importers that the first parcels are on their way. I hope  they get here soon. These are certainly wines worth trying, especially if the price points are similar to the EU, where you can find Arcadia for 10-15 euro a bottle (about $15-25 US).