When I started The Naked Vine lo those many years ago, one of the wines I reviewed in my very first column was a varietal that I’d only recently turned on to – Malbec. I’ve not covered Malbec as much over the last few years as my palate swung back towards the Old World, but it’s too good a grape to pass up for long. 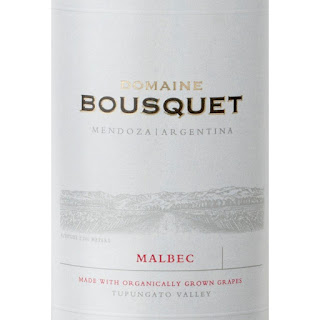 Malbec was known for centuries as one of the five major grapes that makes up the classic Bordeaux blend (Cabernet Franc, Cabernet Sauvignon, Merlot, and Petit Verdot are the others). Malbec’s inclusion in Bordeaux is typically minimal – usually a single-digit percentage of the blend. French Malbec – sometimes called cot noir or Auxierrois – yields a dark, inky, tannic wine on its own. (The Cahors region in France is about the only source of 100% French Malbec.)

In the mid 1800’s, cuttings of French Malbec vines were brought to Argentina and transplanted. After some ups and downs in production, Malbec rose to viticultural prominence in the 1990’s in Argentina and is now both their most widely planted red grape and most exported wine.

The terroir of Argentina turned out to be uniquely suited for growing this formerly humble blending grape. Rather than the dark, tannic monster from Cahors, Malbec from Argentina thrives in the high altitude of the Mendoza region – yielding a wine that, while still quite powerful, is considerably more approachable. Argentine Malbec typically has big fruit flavors and smoky tannins. These wines typically pair beautifully with anything that can be dragged across fire. Grilled steak, chicken, and pork are classic pairings, and it holds up well against strongly flavored sauces and cheeses. Malbec also tends to have a fairly reasonable price point.

The success of the grape in Argentina has attracted some Old World winemakers to South America, where they attempted to merge the more elegant French wine style with the Argentinean flavor. One such example is the Domaine Bousquet 2015 Malbec. Domaine Bousquet, founded in 1990 in the Uco Valley of the Mendoza region, produces exclusively organic wines.

This particular Malbec boasts a dark violet color and a big nose of plums and violets. The mouthfeel is quite sturdy, with lots of chewy, tooth-staining tannin – more so than some of its typical Argentine cousins. However, that tannin is balanced by more of that plum flavor, as well as some blackberry and leather. The Bousquet’s finish is long, tannic, and smoky. It calls out for -- nay, downright demands -- grilled food. We tried it with some burgers – both beef and pork – and it was spot-on. A medium-rare steak with a spice-blackened crust would also be a good choice.

The Domaine Bousquet retails for around $12. It’s well worth it.