Like just about every other foodie we know, the Sweet Partner in Crime and I went to see the now-ubiquitous "Julie & Julia." We enjoyed the movie quite a bit, especially the parts about Julia Child's background. Afterwards, we promptly rented some old The French Chef DVD's from Netflix and snagged a copy of Mastering the Art of French Cooking.

[Side note: I read the book on our honeymoon and discovered that most of the "Julia parts" were additions when the screenplay was adapted...and that Julie was hardly the cute little junebug Amy Adams portrayed. Still, both the book and movie portray the ultimate fantasy for bloggers...getting "discovered," garnering a huge following, and getting our words read widely.]

So, with this experience in our heads, we decided to do a French-themed New Year's Eve. (If you're not familiar with our little tradition, see here, here, and here.) Unfortunately, some family health issues called the SPinC out of town for the couple of days where we ordinarily did our prep. I figured she'd be exhausted when she got home and wouldn't be in any semblance of mental space to want to cook -- but I sure as shootin' wanted to keep our ritual rolling. So, the SPinC's worst nightmare came to pass -- Mike alone in the kitchen for an extended period of time. This usually leads to a good percentage of the household's pots and pans being used at least once, a few sauce and oil splatters in hard-to-reach places, and a somewhat stickier floor than when she left.

I did my best to keep things tidy. Really I did.

Here was the menu for the afternoon & evening: 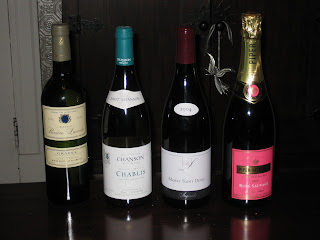 Courses #1 and 3 were from Julia Child's book. Steamed crab is pretty straightforward, and the clafoutis was a recipe I poked around the Internets to discover. Now, so you don't think that we're even more shamelessly gluttonous than we clearly are -- our little "meal" took place over the course of an afternoon and evening. We got the party rolling around 2, once the SPinC had a chance to get home, go for a run to clear her head, and get into appropriate loungewear for the day.

I never knew much about leeks for most of my life. I'm addicted to the bloomin' things now. I put them in as many recipes as I can find for them. This soup, classically French, has such a remarkable flavor -- which is amazing because it's really just leeks, potatoes, water, salt, pepper, some butter, and parsley. But it's SO good. I feared the white Bordeaux might be too light for a soup like this one, but the acidity and minerality made a lovely balance. 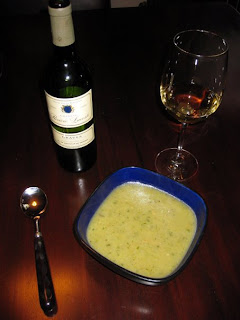 A couple of hours later, we moved on to the crab legs. I'd initially thought about doing a lobster for this course, but neither of us really felt like committing arthropodicide on New Year's. We let someone else do the dirty work for us and stuck to king crab, which was plenty rich and tasty enough for us. A little drawn butter alongside, we cracked the Chablis which we snagged at the dinner at the Phoenix a few months ago. Chablis & shellfish is a heaven-sent pairing, and we certainly were not disappointed. 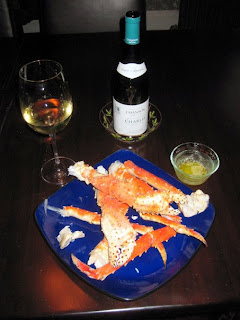 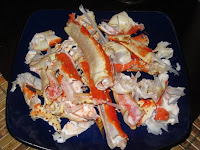 We gave ourselves some digestion time as we listened to some jazz and then watched Duke's utter detonation of the Penn Quakers as an interlude. During the second half, I put the Bourguignon on to simmer itself to proper warmth. By game's end, we were ready to go. I'd opened the Moray a few hours before to let it breathe. We dished it up and headed to the table. Now, I'll admit -- I was a little bit skeptical of the recipe. I wondered why you just wouldn't throw everything in a slow cooker and turn it loose. After all, it's just beef stew, right? 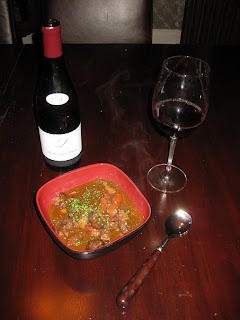 Wrong. There's something about the way that the flavors from the various steps of cooking marry that you end up with waves of flavors coming at you from any number of directions. Throw in the smoky loveliness of a very very good pinot noir, and it's a pretty magical dining experience.

Admittedly, I did tweak the recipe a bit -- basically amping up the various levels of spice. For instance, the original recipe calls for 1 tablespoon of salt for the entire dish. Only a dash? Balderdash. I also had some new potatoes, which I quartered and added, rather than doing boiled potatoes on the side.]

In a nod to our advancing ages, we ended up admittedly taking a nap at this point to get ourselves up until midnight. We made it in time to crack open the Champagne and dig into the clafoutis. 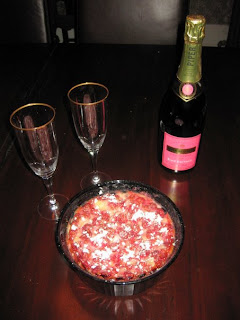 Now, I'd not even attempted a dessert like that (pies and pastries are the SPinC's bailiwick) -- and if I were to do it again, I'd probably have used a slightly larger baking dish -- just so it would have cooked a little more quickly, but I was pretty pleased with the result. We used cherries from our year's harvest from the tree in the backyard, and they overwhelmed the subtlety in the Champagne (a rosé Champagne at that) -- so we finished the two up separately before clinking glasses at midnight and smiling at another New Year's well done.

I would agree if we were talking about mussels, clams, oysters, etc. King crab and lobster are too rich, in my opinion, for most white Bordeaux. The first wine we poured would have been overwhelmed.

I have no doubt that there are some white Bordeaux that would work, but my preference would almost always be Burgundy in that context. But, as I always say, drink what you like...

Good point. I don't do crab/lobster nearly as often as I do oysters/shrimp/clams/scallops. And I'm always looking for ways to expose more folks to white Bordeaux.

Speaking of which, if you have any of that white Bordeaux left over, pour it for a snack with a little Manchego cheese. Yum.