Oh, do we love ourselves some pizza around the household. Pizza’s so deliciously egalitarian. Make it however you like it. Toppings, your choice. Thickness, your choice. Vegan, Vegetarian, Carnivore – there’s a ‘za out there for everyone. For us, it can range from indulgence to “don’t feel like cooking tonight…what can we throw on a crust?” Yep. Put pretty much toppings on a well-covered crust and I’m signing up.

If you’ve poked around this space for any amount of time, you know my usual recommendations for pizza. I either crack a medium-bodied Italian red or some kind of sparkling wine when the disc of deliciousness emerges from the oven. I swear by them both. After receiving a “come hang out and we’ll order pizza” invite from some friends of ours, the idea hit me – why not try a side by side of Italian wine and bubbly. Cage match. Vino a Vino. Or something.

Regardless, it made for the perfect excuse to kill a couple of bottles.

We’re pretty lucky. About five minutes from us (and a block from our pals) is Buona Vita -- a pizzeria owned by a third-generation Italian family. They make a tremendous Southern Italian, stone oven-baked thin crust pie. We ordered two to sample – one pepperoni, one Margarita. For those not familiar, Margarita (or Margherita) is fresh tomatoes, mozzarella, & basil. If you haven’t given such a pizza (or Buona Vita, for that matter!)…do so. Perhaps now.

We packed up the beagle and headed over to their place. While waiting for our pizza, we enjoyed a delicious antipasti provided by Chris, frontman of local rockers Brewer’s Tongue, and Sunshine Rei, his lovely wife. A sufficient amount of time passed. No need for delivery. A block’s not too far to stroll, after all. Pizza retrieved, we opened the two wines for the evening: 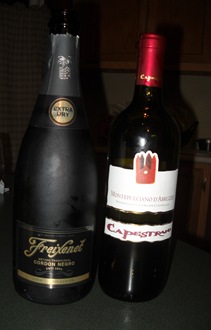 The Freixinet is a Spanish sparkling wine I’ve used as a fallback basic bubbly for eons. It’s very flavorful and crisp. If you remember your sparkling wine terminology, among commonly available wines, one labeled “brut” will be the driest. “Extra dry” means that there’s a hint of residual sugar left in the wine. With something like pizza, an ever-so-slight amount of sweetness can make the wine pair a bit better, in my opinion.

We fell to eating. We tried our best to do the 2x2 comparison, taking detailed notes and really tasting – but as is so common when we all get together, we got to chatting about everything from the Women’s World Cup to T.Rex to Amsterdam (In my mind, a logical progression). After several slices and a few refills, however, consensus formed in a surprising manner.

The preferences broke along gender lines. Chris and I preferred the Cava with the pepperoni and the Montepulciano with the Margarita. We thought that the sparkler cut the fattiness of the sausage and let the flavor (and they use good pepperoni) come through. We thought the red wine pointed up the red sauce and the basil on the other.

Sunshine Rei and the Sweet Partner in Crime went the other way. They thought that the cava went better with the Margarita, since the bubbles cut the mozzarella and let the fresh basil reign. They also both thought that the depth of the Montepulciano was a better complement for the meat. 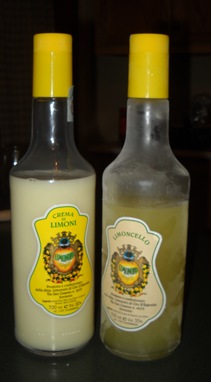 Thanks to a surprise from Chris, we got to do one additional comparison. A good friend of his, Blake, is in the Navy Reserves and is deployed in Italy, where he’s actually working for the Army. He sent Chris a “share package” not long ago. Within were a couple of traditional Italian aperitifs/digestifs: Limoncello and Crema di Limoni from Limonoro, a liqueur maker in Sorrento. We decided to open them. Chris also had some homemade limoncello crafted by his bass player Dave – so we needed to do a side by side of those in the interest of science, of course.

There was a distinct difference between the Limonoro and the homemade. Dave’s limoncello had a slightly sharper flavor. We could taste a thread of bitterness from the rind and the tartness was sharper. The Limonoro was smoother. Chris and I split on this one. Brewer’s Tongue loyalty won out for him. However, with the Crema di Limono, I thought I was going to lose Chris – I think he discovered his touchstone after-dinner drink. “This blows my mind!” he exclaimed. While I wouldn’t go that far, I thought it was pretty darned tasty, and made a good closer for our evening’s experiment. 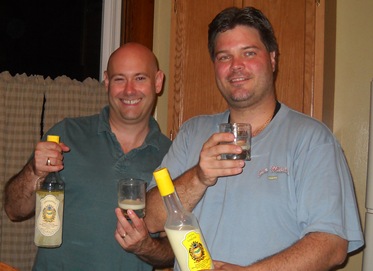 So, what did we learn? Our beagle can co-exist quite easily with a cocker spaniel and a collie. You can’t go wrong with either Italian reds or sparkling wine if you’re throwing down a pizza. And palates may be gender-specific. We’ll have to come back to the last for further examination.

The Kinkead Ridge 2nd label River Village Cellars 2009 Cabernet Franc at 11.95 is going to be THE perfect pizza wine!

Well, I'll just have to be the judge of that sometime soon! :-)