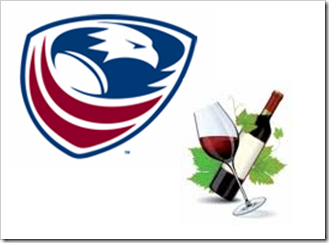 Hand it to the folks at Planet Bordeaux. They’re a creative bunch.

As I’ve mentioned before, Planet Bordeaux is the marketing arm of the winemakers who produce Bordeaux and Bordeaux Supérieur wines. These are the wines that often get lost between the more inexpensive “vin de pays” table wines and the “classified growth” wines that can go for hundreds of dollars apiece. These mid-priced Bordeaux (which actually aren’t much more expensive than the vin de pays) are designed to be solid, everyday values. The Planet Bordeaux folks were looking for spokesmen. They found a bunch of unexpected takers – a bunch of loud, muddy, sweaty, normally beer-swilling men and women:

Planet Bordeaux is now an official sponsor of USA Rugby.

The Rugby World Cup will be held in New Zealand in September. Planet Bordeaux decided to support the Eagles (the US team, currently ranked 17th in the world) on their path to the event. I was fascinated by this choice of sponsors, largely because after my remarkably brief and utterly unimpressive career as a rugger, wine was just about the last thing I associate with rugby. Beer, blood, public nudity, beer, and beer…sure.

Apparently, however, the Bordelais are absolutely bonkers about their rugby and at least some of them are willing to trade national loyalty for commerce and visibility. “Planet Bordeaux and the Eagles are both dedicated to excellence and contributing to the game of rugby beyond the field. The partnership will help to prepare the Eagles for their build up to the world’s largest rugby stage in September,” said USA Rugby CEO and President of Rugby Operations, Nigel Melville.

In celebration of this partnership, the good folks at Balzac sent me another set of Planet Bordeaux samples. My enthusiasm for these bottles was much greater than my desire to put on my old kit again. I’m much better gallivanting in front of a wine tasting than I am running for my life as an overmatched outside centerback.

Chateau Raynier 2006 Marc Lurton Bordeaux – This is an exceptionally easy-to-drink Bordeaux. It has the requisite earthiness and “vegetal” nature, but for the most part, it’s just smooth and balanced. The merlot and and cabernet grapes strike an accord, and you can uncork this one with any number of foods. In our case, we had it with some beef kabobs, also skewered with pineapple, tomato, mushrooms, onions, and green peppers. Also, a salad of greens and basil leaves with balsamic vinaigrette. At 12.5% alcohol, nice and light -- just uncomplicated, friendly, and pleasant. About $14.

Chateau Le Grand Verdus 2009 Bordeaux Rosé – The English translation of the back of the label reads: “Crisp, voluptuous, aperitif, fruity, femininity, passion, lustrous, relaxation, pleasure, fragrant, candy, warmth, temptation, intensity, seductive, summer, modern, raspberry, aromatic, energy…” (Jeez…I need a smoke…) While I won’t cop to every term on that list, I will say that this is an exceptionally pleasant rosé. Made from cabernet sauvignon, cabernet franc, and merlot – this is a hearty rosé with plenty of fruit and a pleasant minerality. We grilled turkey burgers alongside some mushroom and parmesan couscous and it went splendidly. Also was quite tasty on its own. An absolutely smashing deal at $9, as well.

Chateau Ballan-Larquette 2009 Bordeaux Blanc -- This one takes a hard but not unpleasant turn when you get to sipping on this one. It starts out with a very tart lemony zing, but quickly mellows into a nice balance of mineral and fruit, which further mellows and finishes creamily instead of acidically. Medium bodied for a white Bordeaux so it can handle some richer foods easily enough. We did mustard-and-pretzel crusted chicken breasts with some new potatoes sautéed with pancetta. Very tasty. Very interesting value and an excellent dinner white at $10-14.

Chai de Bordes 2008 Bordeaux Rouge – Cracking this one, the nose was floral, almost lavenderish to go along with some light berry scents. It’s light bodied and fairly acidic with a cherry and mineral flavor. The finish is quite dry –tannic, but not harshly so. Reminds me a little of a Montepulciano d’Abruzzo, actually. A very pleasant and approachable Bordeaux. $15-18.

Chateau du Cros 2009 Bordeaux Sauvignon – They call this a “field blend,” which is a blend of two grape varieties planted together in the same vineyard. In this case, it’s largely Sauvignon blanc with a little Semillon and Muscadelle thrown in. It starts you with a fairly strong nose of apples and lemons. I found it to be minerally and sharply acidic, like a shot of “lemon juice light.” Finishes slightly astringent. To me, it seemed like a Bordeaux winemaker was trying to make something that tasted like Italian pinot grigio and just missed. It’s a decent quaff and would go well with shellfish, especially raw ones, but at around $16, you could likely find a better sipper.

Chateau Le Calvaire 2007 Bordeaux Superieur – I didn’t really care much for this one at first sip. I opened it about three hours in advance and was hit with an “alcohol and grape”. As a little of the alcohol dissipated, however, the wine opened quickly. The Calvaire had a really interesting nose of graphite and blackberries. Fairly full-bodied. On the tongue, more of that mineral to go with a substantial dose of dark fruit and some tannins that linger for a half minute or more. A good, big choice for Bordeaux if you’re looking for something with a little more punch. It does seem to call for bitter and dark flavors alongside – grilled meat, dark chocolate – that kind of thing, especially after it’s been open for awhile (a day wouldn’t be bad, if you can wait that long). Pretty good deal at $16.

Nice article, thanks for the information.

Just to add that before becoming a USA Rugby sponsor, Planet Bordeaux has been a long-term sponsor of the French Federation of Rugby through the 'Oscars of Rugby' award dinners held all over France.

Rugby is an international game, and the Planet Bordeaux producers are delighted with the growing interest in rugby in the US - and the aftergame "convivialite" needs no translation!

I'm just back from Glendale - Denver myself, where we participated in USA Rugby's Tailgate Party & Fundraiser during the Rugby World Cup Test Match, USA vs Canada on August 13, 2011, at Infinity Park, the first municipal stadium built specifically for rugby in the US.

We did a tasting of four whites, one rose & one clairet, and four reds from the Bordeaux & Bordeaux Superieur regional AOCs. Our table was conveniently located between the beer and the BBQ.

As one gentleman said to me, "Beer quenches your thirst, but these wines go so much better with food."

And the pulled pork was indeed divine (thanks again, Angel & Gerald!).

I'll post more info and photos from this event shortly on www.planet-bordeaux.com.