It’s July and that means parades, flags, fireworks and RIBS! This year Christine and I were visiting her sister Vida and brother-in-law (and my doppelganger) Rob and their two boys Orion and Jonas. They live on Bainbridge Island near Seattle, Washington, so we got to spend time with them and experience some of the natural beauty of the Pacific Northwest. Since we were going out there, we decided to take the Wine and Dinner Club on the road. With luck and plenty of bubble wrap in the luggage, the wine made it in fine shape, supplemented by some Washington state wines that Rob picked up for the occasion. Enjoy.

We started with some cheeses and cured meats as an appetizer. The cheeses were a manchego and a herbed goat cheese, and the meats were a spicy cured Italian salami and some thin prosciutto. They were served with a sourdough baguette and the first of the Washington state wines, the Ex Umbris. We had asked Rob to pick up another bottle of The Love Grass for the meal, but his local wine shop did not have it in stock and would have had to order it in special. When asked about an Australian wine, the person at the shop said, “Well, that’s one way you could go.” 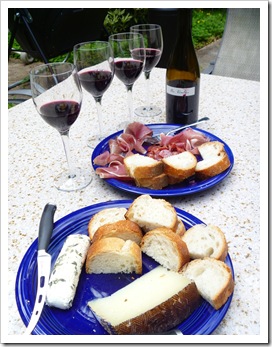 According to Rob, he then went on to espouse the superior quality of Washington state wines and pelted Rob with granola until Rob relented and bought the local fare. (That last part may have been a little exaggerated.) As I recall, and since there were four bottles of wine I don’t recall much, nobody was really bowled over by the Ex Umbris. It had a little spice to it, but not enough to stand up to the spicy salami. I thought it went well with the manchego and would probably be good with a simple piece of grilled meat. Thus, we decided it was a good M&M wine (Meat & Manchego).

After the appetizer we had the main meal which included the slaw, corn and ribs that had been cooking low and slow in the oven at 225 degrees Fahrenheit for about five hours. We did two racks. One I dry rubbed with Southside Market & Barbecue Premium Original BBQ Seasoning from the Southside Market in Houston, Texas and the other with Colonel’s Smoky Rub from Colonel De Gourmet Herbs and Spices at Findlay Market in Cincinnati, Ohio. To cook the ribs you just wrap them in aluminum foil, sealing it tightly, and put them on a baking sheet to catch leaking juices. You don’t even have to watch them and they come out supper moist and tasty. I always put a little barbecue sauce on them and put them under the broiler for a while to give them a nice glaze. Oh, and did I mention Rob is the source for my rib recipe? The other key is to wear an orange shirt! 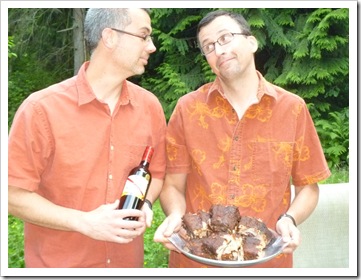 The ribs were delicious and between the four of us we finished both racks. The slaw was tangy and a little sweet and was a cool contrast to the spiciness that the rubs imparted to the ribs. Of the two, the Southside rub was spicier with more pepper in the mix, while the Colonel’s Smoky Rub was just that, smoky. The coconut basted corn was sweet and was a great accompaniment to the meal as well. By this time we were well into the Dominio wine. It was good, but again, nothing really outstanding. We liked saying that the Syrah was tempered by the Tempranillo, but that was probably just 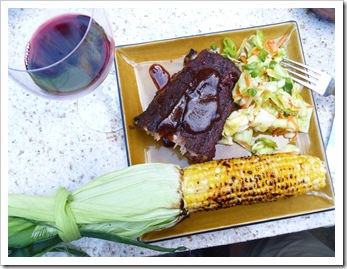 the second bottle of wine talking. Before we finished the meal, we broke open The Love Grass. We thought this one was a lot different than the others and much better with more flavor and good tannic structure (take that granola boy). Or so I recall. Hey, give me a break - this was the third bottle of the night!

After the ribs came out of the oven and while we were eating, I put the pie in to bake. We took a long break after the dinner waiting for the pie to finish cooking and then let it cool while we cleaned up the kitchen. The pie was delicious with the sweetness of the strawberries offsetting the tartness of the very rhubarb, and the filling could not have been more local with both the strawberries and the rhubarb from Vida and Rob’s garden behind their house. 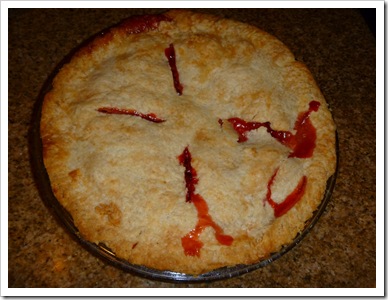 We finished The Love Grass and opened the Sagelands, which was good, but not too complex. It was a nice sipping wine to finish up the evening. Thank you to Vida and Rob for a great July 4th getaway! 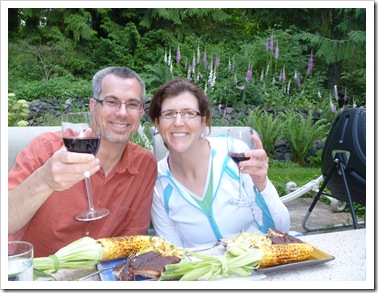 Wine and Dinner of the month club is welcome at our house anytime! Maybe next time we need to fit granola into the recipe though.