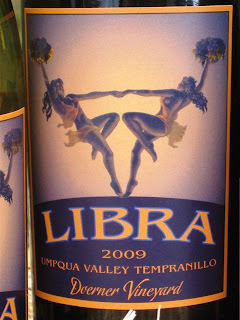 The sun’s setting on the last day of our Oregon vacation. I’m sitting on the back deck of the home of Bill Hanson with a fat glass of Libra Wines’ 2008 Momtazi Reserve. Bill, the owner and winemaker of Libra, looks out over the vineyard as sunset approaches and cracks a little smile.

Our long, twisty road from the baggage claim at PDX to Bill Hanson’s back deck began at Oregon Wines on Broadway in downtown Portland. One of the wines in their pinot flight was the Libra 2009 Willamette Valley Reserve. We absolutely loved it. Rich, perfectly balanced, and flavorful without being too heavy. We asked the fun-loving folks at OWOB if Libra had a tasting room. They said no, but indicated that they thought he showed his wines at the Carlton Winemaker’s Studio.

When our travels led us to that end of Willamette Valley, we discovered the aforementioned studio was a dead end. No Libra. They told us that he’d been working as the winemaker at Panther Creek and they sometimes poured Libra in the tasting room. We thanked them and moved on. At Panther Creek, we discovered that Bill and the higher-ups had had a parting of the ways. Thankfully, the Panther Creek pourer gave us Bill’s phone number. Which was disconnected. However, the pourer let Bill’s wife, Linda, know that we were trying to get in touch with them – and gave them our number, which we’d left at the tasting room. After a couple of phone tag calls, we were able to set up a tasting for the end of the last day we’d be there.

We made our way out into the Yamhill countryside, following directions which included, “take a hard left onto the dirt road… I’ll try to remember to leave the gate open for you,” which, thankfully, he did. We exchanged a few pleasantries before discovering that Bill and the Sweet Partner in Crime were both born in Danville, Illinois.

The ice officially broken, we made our way to the deck to enjoy a gorgeous afternoon and sip Libra’s selections. Not long after we headed outside, Linda joined us the porch, followed by their precocious smile-and-mop-of-dark curls Lily, both back from an afternoon trip to the local pool. Lily, a country music aficionado, came bearing a bowl of peanut-butter filled pretzels for noshing. She said that the best thing about waking up each morning and looking at her own vineyard is “knowing that we all did this together.”

Bill caught the wine bug in, of all places, a community college Geography class. “[My teacher] really got me, as an 18 year old kid, fascinated with wine. When I was waiting tables at 18, I started learning about wines from all over the world, and I was just fascinated. I wrote papers comparing the climate of Oregon to the world’s other great wine regions. I was hooked. I got into it when I was 20 and I’m 49 now.”

Bill’s first job in the wine world was at Eola Hills’ Hidden Springs Winery in 1985, followed by a stint at Mendocino County’s Parducci. He decided to try the sales end of things for awhile, but the vineyard kept calling him back. He became assistant winemaker back in Oregon at Matello in 2002, then moved on to (and now away from) Panther Creek. He and Linda started Libra in 2007 and made wine from their first estate grapes in 2009. “I always wanted to live on my own vineyard and make wine,” Bill said, “And I just love being around wine people – from consumers who love wine to growers and producers. It’s a great feeling to be able to do what I love.”

Libra’s tagline is “Balanced Wines,” a hat tip to Linda’s Zodiac sign. Libra’s origin story also references the Greek goddess Persephone, who spends six months of each year in Hades’ timeshare, causing the changes in the seasons. “Bill originally had the idea for the Persephone tie in, he did a lot of research and the story really resonated with him,” said Linda, “the whole cycle of the seasons thing… the symbol of balance, and of course we all know how finicky Pinot Noir is to grow and to make.”

Bill says that he tries to craft wines as each vintage demands. “We just try not to get too crazy as far as doing ultra-low yields or overcropping. We’re more interested in flavor development than sugar development, although we hope they come together,” Bill explained. “This year, Mother Nature did a lot of our thinning for us. We don’t want too much alcohol. We just try to run with what Mother Nature gives us. We’re L.I.V.E. (low-input viticulture) certified sustainable.” Linda echoed Bill’s view: “Each of those plants are like one of his children! We do both love the land and firmly believe in only putting into the earth things that will not harm it. Even in my vegetable and flower gardens…we love the end result, a beautiful, natural product which you helped produce--your touch each step of the way had a hand in how it turns out.”

From there, we moved on to Libra’s Umpqua Valley Tempranillo, sourced from the , and finally to his Momtazi Vineyard Reserve. The tempranillo was good stuff, full of chocolate and tobacco flavors. The Momtazi was nothing short of a rock star – smoky, sultry, and special. The most expensive wine in the Libra catalog is the Momtazi. At $35, it absolutely blew away many of the wines we tried on the trip that retailed for twice as much. After that, we retasted a few things – but we weren’t paying a lot of attention by that point. We were soaking up the sun, good conversation, and good company.

I asked Bill what it was like using his deck as a tasting room. You could hear genuine appreciation in his voice: “It’s awesome. It really helps us appreciate what we have. I mean, we are really living the dream out here, but sometimes the dream can be a lot of work! Having folks over, sharing our wines and good conversation with them – it’s fun! And it helps us remember just how much of a blessing this is.”

Bill said that his goal is to “keep it simple.” His hope is to produce more and more of the estate wines, eventually getting the production to 600-800 cases per year – in addition to doing some more vineyard specific wines like the Momtazi and Ribbon Ridge since they’re “big fans of that fruit.” He said that he’ll also keep crushing pinot gris because “you’ve always got to have some white wine around, you know?”

Libra’s a limited distribution wine, so it will likely be difficult to track down in local stores. The best way to find it is to order it straight from the source: http://www.librawines.com -- trust me, you’ll be glad you did. And if you happen to be in the Willamette Valley, give Libra a call. Bill will leave the gate open for you.