I’m sitting across from Jim Brandeberry in the tasting room of his namesake winery. After delivering that quote, he pauses for effect as I watch a grin spread across his face. He chuckles briefly before musing, “…but it’s definitely not the way I imagined my retirement!”


Brandeberry Winery sits adjacent to the home of Jim Brandeberry on Jackson Road in Enon. The winery and tasting room were built in 2008…just in time for a natural disaster.

“We finally had everything done,” Jim said, “We had the tasting room built, we had the tanks installed, and we were all ready to go. The weekend we were going to open – along came Hurricane Ike.” The wind drove a tree through the roof of the building and killed the power for over a week. All the while, he had an unstarted tank of Seyval grape juice ready to go. He decided there was no harm in fermenting what was there. The result was one of Brandeberry’s first big sellers – a dry table wine he dubbed “Windy Ike.” 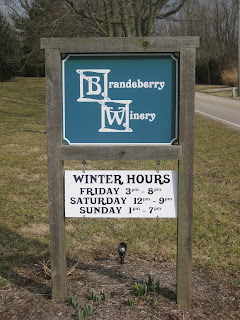 Not long after, the Brandeberrys rescued a stray cat, who they named after the hurricane. The feline Ike spent a couple of years as “official greeter” at the winery until he was, sadly, hit by a car. They dropped the “Windy” from the name. The crisp, lemony wine is still called “Ike” and bears a picture of the critter on the label.

While Brandeberry’s intellectual pursuits now tend towards the oenological, ‘twas not always thus. Brandeberry moved to Dayton in 1969 to take a position at the Wright State in computer science. (As I’m a former tech geek, we spent a nice chunk of time reminiscing about the joys of FORTRAN programming. He honed his early punch card programming chops on an IBM 650 “drum computer” at the University of Toledo.)  In the 1985-86 school year, WSU established the stand-alone College of Engineering. Brandeberry served as Dean for 19 years until his retirement in 2005.

In the early 90’s, Brandeberry and his wife, Sharon, were driving to visit family in New York City. They’d stopped on the way in the Finger Lakes region. Jim said that he “saw a sign for the Cayuga Wine Trail” and they spontaneously decided to winery hop for awhile. In one of the winery gift shops, Jim spied a “Winemaking for Beginners” book. “It was only a buck!” exclaimed Jim.

The winemaking bug bit hard. Jim (the “Li’l Olde Winemaker,” according to his nametag) had been making cider from the apple trees on his property for years, so he started with fruit wines. After the apple came peace, pear, and strawberry wines. The jump was short from fruit to grapes. “I started by buying juice from Valley Vineyards (in Morrow) to make five gallons of wine at a time. After his two horse-riding daughters grew up and moved out, Jim converted his pasture into his first vineyard.

Through his engineering contacts, Jim became friends with Chris Joshi, president of Universal Energy Systems, a Dayton tech company. After making wine together, they decided to increase production to 50 gallon batches. “I’d built some racks in our basement to hold the wine. Well, those racks kept getting bigger and bigger. Before long, we were at capacity – 200 gallons per year. We just gave the stuff away to friends and coworkers at first – and people seemed to really like it -- so I started the process of getting the proper permits to start a winery so we could sell what we made.”
Brandeberry Winery produces around 20 varieties of wine.  “A lot of the wines I make are sweet, because that’s what people want. Some of them are accidents – things that I hadn’t really thought about – but they end up selling like crazy.” One of his recent accidents was a wine called “Berry Monster,” with a label drawn by his 9 year-old grandson. Berry Monster was born when he accidentally pumped 50 gallons of substandard blackberry juice into a 200 gallon tank of raspberry. “We sold it all in less than a year. People are chomping at the bit to get more.”

On the “estate,” Jim currently grows Seyval, Vidal, and Cayuga – all white varietals. He says that he’s still searching for the right red grapes to grow on the property. He grows a small amount of a red varietal called Noiret (no-RAY), although it’s “sufficiently different from what people are used to that it’s not a big seller for me,” said Jim.

He sources the raw material from various places around the country. Much of his juice comes from vineyards near Cleveland – although he reaches as far as Lodi, California for his Syrah. He also still makes a number of fruit wines, including his best seller -- one of the aforementioned “unplanned wines” – a blackberry wine, He says that his blackberry accounts for about 20% of his total sales. “I had a guy in here today who was buying a bottle of blackberry. He told me…that it was his grandmother’s favorite wine while she was alive and that – when she passed -- he’d bought a whole case so that the family could all toast her with it.”

Jim has swapped his computer lab for a sophisticated, albeit somewhat cramped, winemaking operation, located behind the Tuscan-themed murals on the tasting room walls. Instead of stainless steel, Jim makes his wine in 250-gallon plastic tanks. “The plastic doesn’t impart any flavor to the wine, it’s easier to clean, lighter to handle, and it’s made in such a way that it a little bit of oxygen can penetrate – which is necessary to the process.”

His tour of the setup was educational and informational. I’ve suffered through a number of bad winery tours. Jim’s clear pleasure while sharing a simple story about why his crusher/destemmer (which he calls his “Lucille Ball Machine”) that morphed into a history lesson about the practice of grape stomping was a refreshing change. At his “mad scientist station” where Jim adjusts the composition of his various creations, Jim asked for my opinion on his upcoming pinot grigio release, which I thought was greatly improved with the addition of a small amount of the traminette grape.

On the way back to the tasting room, I asked Jim what sort of wine he liked to drink when he wasn’t sampling his own. Jim said that he’s not personally a big fan of sweet wine. “I like dry reds like Sangiovese. Left to my own devices, I’d probably have made dry wines, served them out of my garage, and gone out of business in a hurry. Thankfully, Sharon and my daughters convinced me that I needed to make sweet wines and put together this tasting room. They clearly knew what they were talking about.”

At the tasting room bar, I met Jim’s vivacious daughter, Kelly. She began pouring samples of some
Brandeberry creations after brushing some hay from Jim’s shoulder. (“He must have been feeding the goats earlier,” she quipped.) Several of the wines are state-award winning and/or bearing an “Ohio Quality Wines” designation, meaning 90% or more of the content is from in-state fruit. Like Jim, I preferred his drier selections, especially his dry Vidal Blanc. (He also makes a semidry version of the Vidal, which wasn’t bad either.)

While not my usual proverbial cup of tea, I thought Brandeberry’s sweet wines were actually drinkable. Many local wineries’ “sweet” offerings are cloyingly thick, syrupy messes closer to Kool-Aid than wine. Jim took a more evenhanded approach to these wines. They’re still sweet, but they’re not heavy. Even their sweetest wines, the Cayuga/cherry blend called “Pink Passion” (Kelly’s favorite) and the top-selling blackberry, have some balance, structure, and flavors beyond sucrose.

Brandeberry Winery hosts live music every Saturday. Cookouts are regular weekend occurrences in the summer and fall. Wine is available for visitors both by the taste and by the glass. Light appetizers are also available for purchase, as is the official “Berry Monster” artwork t-shirt. The Brandeberrys also host an annual “Dogtoberfest” fundraiser for the Clark County Humane Society. This year’s Dogtoberfest master of ceremonies will be the winery’s newest official mascot, Mingo, an adorable 40-pound mutt who bid me farewell from the estate with many kisses.

For directions to the winery or for more information, see http:///www.brandeberrywinery.com

This story originally published in the Dayton City Paper.
Posted by The Naked Vine at Tuesday, April 30, 2013