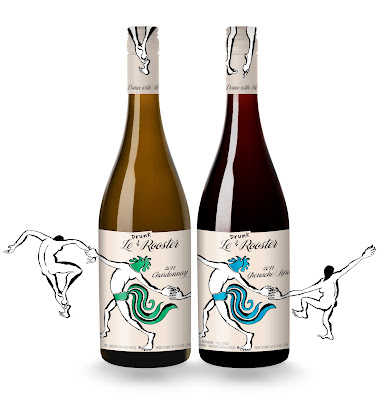 I received a couple of sample bottles from Bourgeois Family Selections of a French tipple from the Languedoc–Roussillon region called “Le Drunk Rooster.” The wine’s moniker stems from an interesting cross section of symbols. The “state bird” of France is the rooster. (The Latin word for both “France” and “rooster” is “Gallus,” interestingly enough.) One of the winemakers that crafted these creations enjoys a good dance after imbibing. Alas, he apparently has (in a phrase I’ll steal from my mother) “more enthusiasm than rhythm on the dancefloor.” His style is, according to the information sheet, “the French version of the Chicken Dance,” hence the name.

Le Drunk Rooster 2011 Chardonnay – This wine is in a light-bodied, lean style. No surprise, considering the region. After a little air opens it up, a considerable amount of oak starts to emerge. I’m not talking Meridian Chardonnay levels of oak – more like a Mersault from Burgundy (although it’s not creamy like a Mersault). It’s got a tart, green apple character on the palate with a lasting oaky finish. Even as light-bodied as it is, the backbone allows it to stand up firmly next to some pretty hearty fare. We poured this with a chicken and Italian sausage casserole, and it worked just fine. I thought it was a pretty solid food wine.

Le Drunk Rooster 2011 Grenache-Syrah – We opened this one during the midst of our kitchen remodel. Our first bottle of the evening had run dry, and we needed something to sip on as the evening wore on. I knew it was from the southern Rhone, so I figured it would make a decent sluggable. Turns out it was slightly better than that. If you’re a fan of peppery wines, this one will grow on you. This blend of 65% Grenache and 35% Syrah isn’t overly heavy, it’s got a good, strong blackberry backbone, followed up by a spicy “tailfeather.” It’s pleasantly smooth, medium bodied, and even on the tannins. We didn’t have this with food – but it was reasonable with evening chocolate.