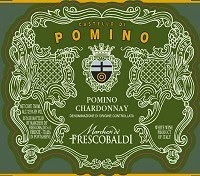 What's Pomino? It's a small wine region tucked away in the northeast corner of Tuscany, near the town of Rufina. In 1855, local winemakers, led by the Frescobaldi family, introduced some French grapes -- Cabernet Sauvignon, Merlot, Pinot Blanc, and Chardonnay alongside the indigenous regional grapes. In a stroke of good fortune for this particular microclimate, these grapes were able to thrive.

The wine fairy (with some help from the folks at Colangelo PR) recently  brought me a bottle of the Marchesi de Frescobaldi Castello di Pomino 2012 Chardonnay. I was intrigued. I've consumed my weight in Tuscany's scrumptious reds, but I'm completely unfamiliar with Chardonnay from there. The Italian whites I'm most familiar with are pinot grigio and the "V" family -- Verdicchio, Vernacchia, and Vermentino. I've sampled others, like Falanghina and Gavi, but if I've had an Italian chardonnay in the past, it didn't make much of an impression.

The Frescobaldi Pomino Chardonnay changed that a bit. This is an interesting departure from those aforementioned Italian whites. The wines I mentioned at the top are all largely lean and acidic. This Chardonnay is certainly a lean-styled wine, but it's much richer than most of its local grape brethren. The nose is a mineral-laden combination of apple and melon, which leads to a somewhat creamy, easy apple flavor. The finish is soft, slightly tart, and slightly minerally. It's very gentle and rich.

The real test of an Italian wine is being paired with food, of course. We had this alongside a penne pasta in a goat cheese marinara with some bits of capicola "bacon" tossed in. I've gotta say, it was a particularly pleasant pairing. I would imagine it would be an extremely food-flexible option if you're thinking about holiday wine.

The Pomino Chardonnay retails for around $18. Frescobaldi also produces a "Pomino Bianco," a blend of chardonnay and the aforementioned pinot blanc, which I would imagine would be very much along these same lines as this wine flavorwise. If you'd like an Italian change of pace, give it a swing.