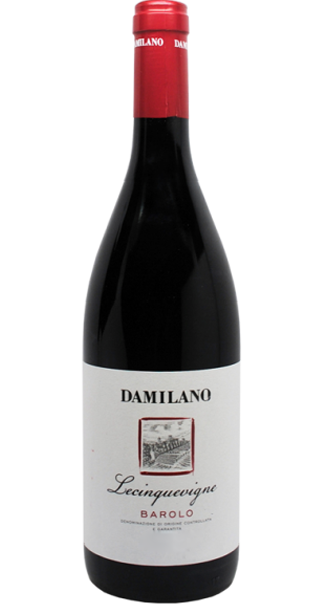 A bottle of Barolo – the Italian “Wine of Kings” – recently made its way to Vine HQ for a visit.

Barolo doesn’t make many appearances around these parts. This wine from the same-named area of the Piedmont region commands respect on any wine list and an emptying of most wine drinkers’ wallets. Almost all Barolo are high-priced wines. Decent Barolo usually start at around $50 and go up from there. It’s not uncommon to see good vintages hung with pricetags upwards of $150.

When this particular bottle showed up, thanks to the good folks at Colangelo, I did a double-reason double-take. What was so different about the Damilano 2010 Barolo “Lecinquevigne”? First off, the vintage. 2010? Most Barolo, or so I understood, require around 7 years in bottle for its powerful tannins to chill out enough for the wine to become drinkable. Second – the retail on this wine was $35. Thirty-five clams for an actual Barolo? Inconthievable!

OK, so what gives here? Why is Barolo so expensive, and how’d this wine end up being so much less so? And why can I supposedly pop and pour this bottle, when I’d expect to wait until 2017 under normal circumstances?

Barolo is made from the Nebbiolo grape, a small, thin-skinned grape that’s notoriously hard to grow. The juice from Nebbiolo is super-high in both tannin and acidity. In the traditional method of making Barolo, the fermenting juice soaks with the skins of the grapes – a process called maceration -- for almost a month in some cases, extracting the maximum amount of tannin from the skins. The resulting juice is then aged in large containers called botti for at least two years and sometimes much longer. Once bottled, the wine had to sit for a long time, as I’ve already mentioned. The resulting Barolo’s tannic, powerful flavors can be challenging for many wine drinkers.

[Side note: Interestingly, “traditional” Barolo-making technique has only been around since the 1920’s, when the French, of all folks, brought these techniques to the region. Prior to that time, the Nebbiolo-based wines in that area were sweet, light in color, and slightly fizzy.]

In the 1980’s, the region went through what some writers termed the “Barolo Wars.” A group of winemakers, again influenced by their Burgundian counterparts, decided to employ more modern harvesting and winemaking techniques. These techniques included green harvesting (removing unripe grapes from ripening clusters to improve the remaining grapes), temperature-controlled fermentation, and the use of commercial yeast for more control over the product.

Additionally, these modernist winemakers used smaller barrels called barriques. Barriques typically hold around 60 gallons of wine, compared to botti, which can hold up to 4,000 gallons. Smaller barrels and shorter maceration times combine to create wine that is more approachable flavor-wise and can be drunk after a shorter period of time. These “modern” Barolo tend not to have the extended aging capacity as their more “traditional” brethren.

Which brings us to the Damilano. Damilano Winery was founded in the 1890’s, yet clearly falls on the “modern” end of the spectrum winemaking-wise. They make four “cru” Barolo (interesting that they’d use the French term) which are in the $70-80 range. The wine I received, the “Lecinquevigne,” is a blend of grapes from vineyards across these “cru.” Hence, it has a lower price – as seen with most second label wines. The name “Lecinquevigne” translates as “Five Vineyards” and has given my spellcheck a somewhat permanent case of the yips.

I wasn’t hip to the history of the “wine wars” before starting this column, and the Barolo I’d tried previously had been, as far as I know, from the “traditional” end of the spectrum. I didn’t know the history when I took my notes, and I was somewhat reassured when I tasted this – because I thought there was something a little different about the Lecinquevigne.

The nose flew at me rich and fragrant. I initially got strawberries, cotton candy, and some woodiness. The traditional “tar and roses” aroma that Barolo is known for emerged a bit as the wine got more air. But the flavors were soft and subtly dark. There’s plenty of mouth-coating tannin in the medium body, with notes of licorice, cherry, and leather. The finish is super-long, lots of strong tea flavor that lasts a couple of minutes if you let it. That said, I wouldn’t call it overly complex, compared to many other Barolo.

This isn’t meant to be a slam; it is a really good wine. The intent of the modernist winemaker clearly shows through. Traditional Barolo’s power and harsh tannin is Exhibit A of the male end of the “masculine vs. feminine” wine divide. It is the “Wine of Kings,” after all. Modern Barolo has a much softer, “feminine” flair. I enjoyed the Lecinquevigne quite a bit, but it might not sit as well with traditional Barolo enthusiasts. I don’t know if it would pass the Uncle Alan test. We had this bottle over the course of two nights – once with a beef tenderloin braised in three wines, and again with a late-summer-veggie minestrone. Both worked very nicely with this more mellow version of Barolo.

At $35, I’d certainly recommend it. I think it’s a pretty darned good wine – especially if you’re still learning about Barolo and deciding whether it’s for you.